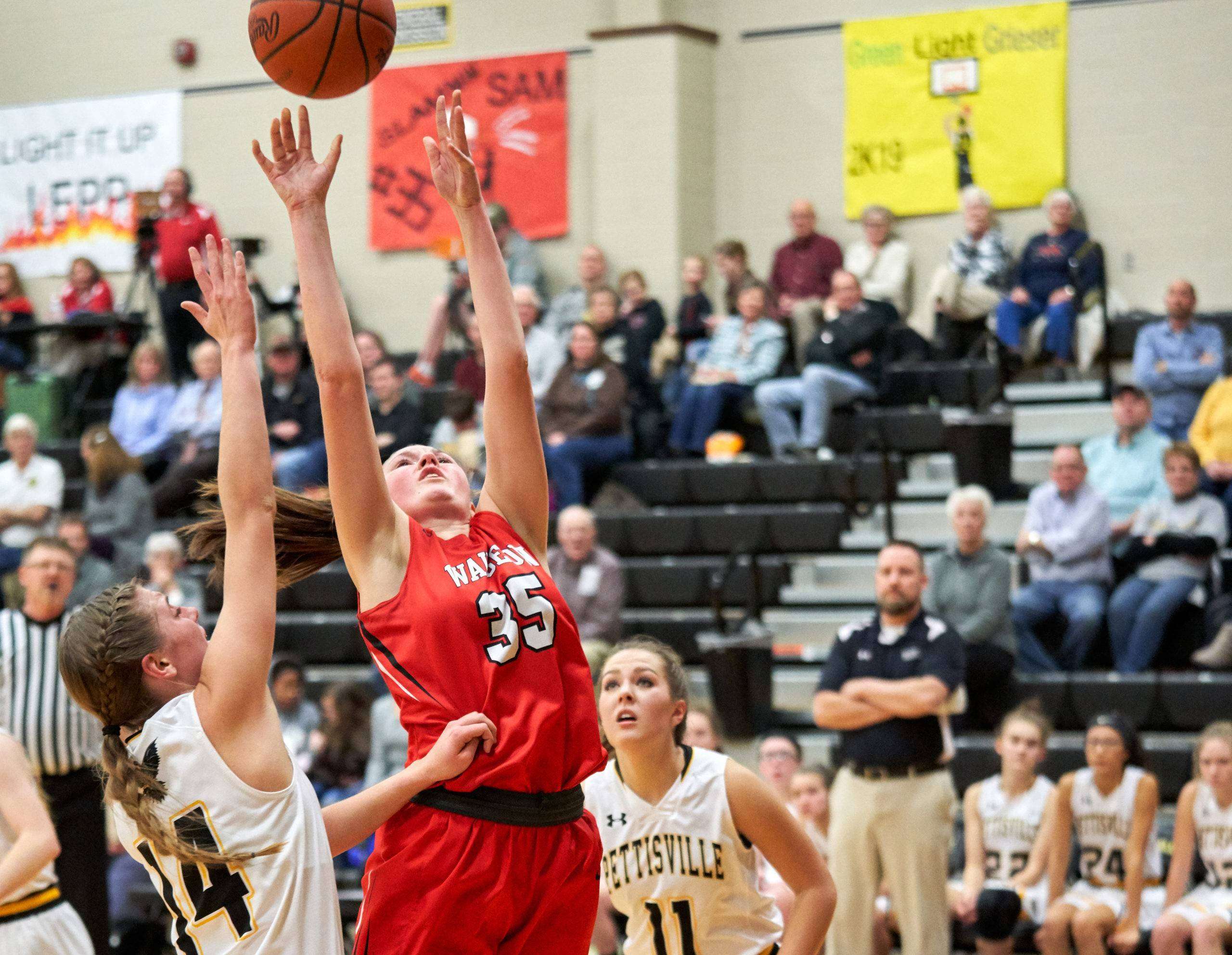 The NWOAL will have plenty of young talent led by Delta with juniors Brooklyn Green, Braelyn Wymer, and Brooklyn Wymer. Wauseon finished last season strong and have the core of their team back with senior Sydney Zirkle and sophomore Marisa Seiler leading the way.

Bryan returns seven letterwinners with a majority of them being underclassmen who picked up a lot of varsity experience last season.

The defending league champions return plenty of firepower as 4 of their top 5 scores (60% of the offense) are back for Ryan Ripke’s team. Even though they have a lot coming back, Ripke’s primary concern entering the 2019-2020 campaign is a lack of depth.

“After those four girls, no one has played any meaningful varsity minutes. We need to find girls who will play valuable minutes and can do the intangibles for us. Rebounding is another concern. We’re not a very big team, so we are going to have to be physical in our rebounding game”, explained Ripke.

Overall, Ripke says they have a good core back from last year and the juniors are eager to step into new roles of leadership. The coach did mention that Ella Ford and Braelyn Wymer are rehabbing knee injuries from the spring and it will take some time to get them back in playing shape.

While Ripke expects his squad to compete for a league title, he points to Wauseon as one of the league favorites along with Archbold and Bryan.

ABOUT THEIR SCHEDULE: The Lady Panthers started the regular season last Friday with a 45-41 win at home against Swanton in their non-league matchup. The NWOAL portion of the schedule starts on January 3rd when they travel to Wauseon.

This season’s edition of the Archbold Lady Bluestreaks will be young with only two seniors on the roster for head coach Brian Ziegler. Archbold will rely heavily on their guard play as they develop their post players with the loss of their top two rebounders from last season.

“We will lack experience at some key positions so we will need returning players to fill different roles for us as we look to replace three starters lost to graduation”, said Ziegler.

Ziegler looks for the league to be very balanced this year with a several good coaches and players in the NWOAL.

ABOUT THEIR SCHEDULE: The Lady Streaks knocked off Hicksville 43-28 last Saturday in their season opener. League play will start at home versus Swanton on January 3rd.

The Lady Indians have a wealth of talent and experience returning from last year’s Sectional Champions. Ten letterwinners are back including their top three scorers Marisa Seiler, Sydney Zirkle, and Sam Aeschliman.

While Wauseon has experience and depth, Head Coach Dan Seiler is looking for consistency. “We are looking to pick up where we left off last season and continue to build. We have experience coming back and we are looking to become more consistent each game”, comment Seiler.

Seiler sees Bryan and Delta as the teams to beat in the NWOAL with Archbold being a contender as well.

ABOUT THEIR SCHEDULE: Wauseon travelled to Anthony Wayne on November 26th for their season opener while NWOAL play starts on January 3rd at Delta.

Justin Sonnenber returns to his alma mater to take over the girls’ basketball program and will have six returning letterwinners to work with. Among them will be 2nd Team All-League selection McKenzie Vance and Honorable Mention selections Kayla Prigge and Audrey Sonnenberg.

“We have a lot of experience coming back this year and I think we can be very balanced scoring. If we play hard and improve on the defensive end, we have the potential to be a contender in the league”, commented Sonnenberg.

The Lady Bulldogs return a lot of experience from a year ago with nine letterwinners back for Eric Oakes. “This team isn’t real tall so we’ll have to work hard on rebounding and post defense, we’ll be a scrappy team with some speed”, commented Oakes when talking about his team.

“I think overall we can be very competitive and tough to beat if our outside shooting continues to improve. I think our defense and hard play can keep us in ball games”, added Oakes.

The Swanton coach looks for the NWOAL to be very competitive all the way through with a good chance that the league champ or co-champs will have a couple losses.

ABOUT THEIR SCHEDULE: Swanton opened the season last Friday with a 45-41 loss at Delta in their non-league matchup. NWOAL play will start for the Lady Bulldogs on January 3rd at Archbold.

Bryan will be a young team with only two seniors on the roster and will feature several players that gained experienced last season as underclassmen. Also adding to Bryan’s depth will be the addition of players from their JV team last season that went 20-2.

The Lady Bears will be challenged this year to find leadership and consistent scoring with the graduation of their top three scorers including 1,000 point scorer Kennedy Lamberson.

“We lost four 4-yr letterwinners and a wealth of leadership and experience. We need people to step into leadership roles, as well as find some consistent scoring. We need to continue to defend and keep ourselves in games”, said Grosjean when talking about concerns going into the season.

“We hope to be a factor in the NWOAL race and build on the success the girls had in volleyball, soccer, and tennis during the fall”.

Grosjean looks for the NWOAL to be wide open as all the teams return underclassmen that will only get better.

ABOUT THEIR SCHEDULE: Bryan started the season with a 61-32 win at Ottawa hills last Saturday night. NWOAL action starts on January 3rd at home versus Evergreen.

The Lady Vikings have six returning letterwinners including their leading scorer in Savannah VanOstrand and coach Brittaney Cymbolin is encouraged by what see has seen so far from the team.

“One our strengths will be of our ability to work as a team. These kids are extremely unselfish and work well together. We also have a young group of underclassmen who push our upperclassmen to perform each day”, said Cymbolin.

Cymbolin said getting off to good starts and rebounding the basketball will be keys for the upcoming season. “I feel like our girls can surprise some teams with their work ethic and team play. Over the past year, our girls have truly come together and will be fun to watch this season”.

Cymbolin sees the teams in the NWOAL has pretty evenly matched and doesn’t see a team that would be considered dominant stating anyone will have the ability to knock of another team on any given night.

ABOUT THEIR SCHEDULE: Evergreen started their season on November 26th at home with Otsego. The league schedule for the Lady Vikings will begin on January 3rd at Bryan.

Coach Tim Davis likes his team’s combination of height and quickness along with their depth as they start the 2019-2020 season. Consistent scoring and taking care of the basketball will be areas that he will be looking for his team to improve.

“We have a hard working group with a lot of girls with potential to see playing time. Competition in practice should make us better. We feel if we can find consistency on the offensive end we can have a solid season. Defense must be something we can count on each night”, elaborated Davis when commenting on the overall outlook of his team.

Davis expects the NWOAL to be strong and deep as always and teams will have to be ready to play every night.