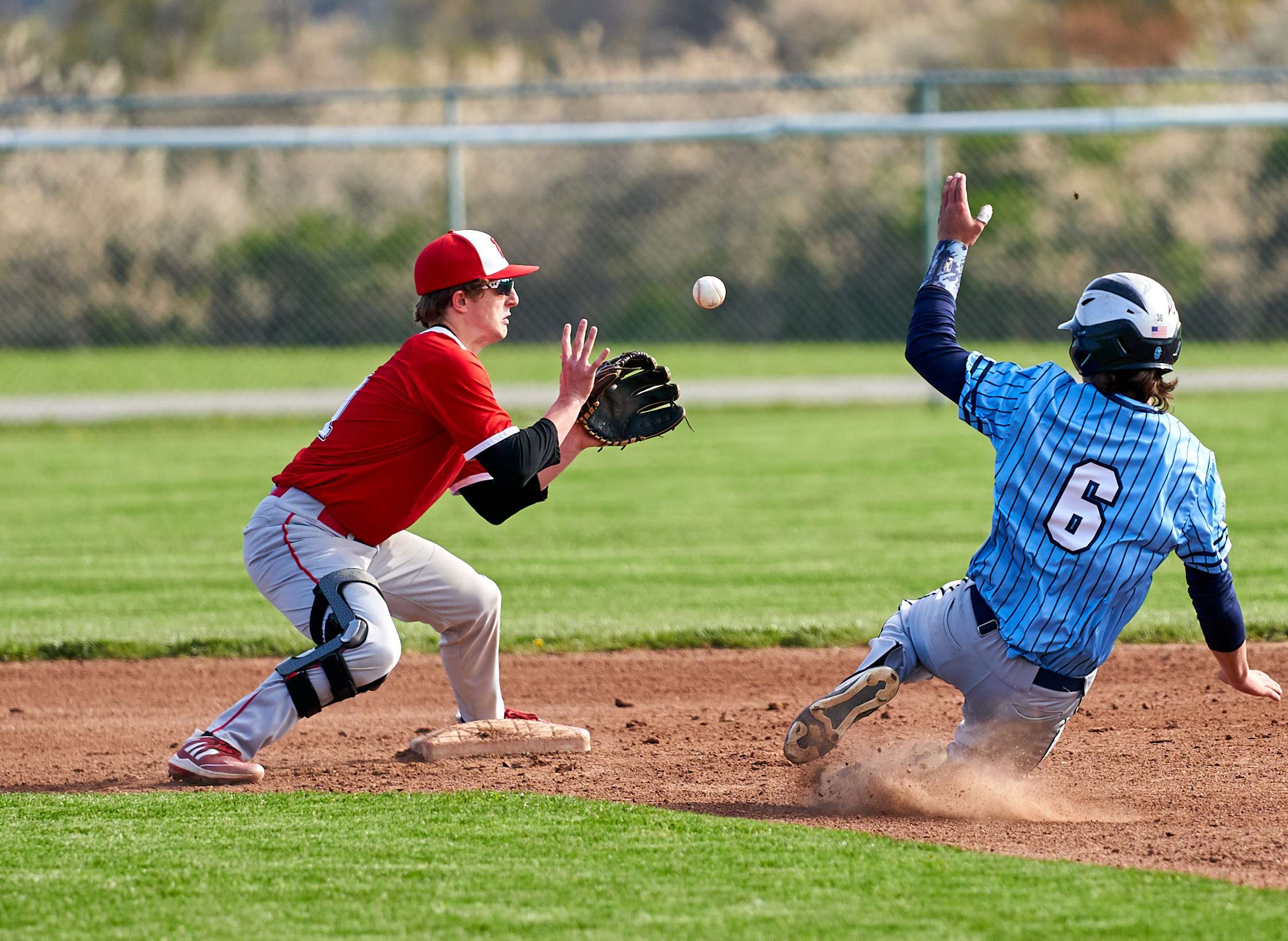 BEATING THE THROW … Easten Richmond slides into second base for Montpelier ahead of the throw in a game against Hilltop last season. (FILE PHOTO)

North Central and Edon return plenty of firepower from last season and figure to be the frontrunners in the BBC this season.

Montpelier, winner of the last three league titles., will look to replace a large group of seniors as they compete for another BBC championship.

The BBC schedule will have a new look this season with the addition of the Holgate Tigers. In the past, teams faced each other twice with both games counting toward the league standings.

This season, while some teams will still play each other twice, just one contest will count in the league meaning instead of 12 BBC games, there will be just seven this year.

SEASON OUTLOOK: “Winning the BBC for the third year, playing in the district finals, and breaking numerous school records was everything we could’ve hoped for from our boys last season.”

“Like we say every day, there is a bullseye on our back from day one. We graduate a group of seniors that have carried our program for several years.”

“New faces will have to step up to fill the gap that many of the kids have left.”

“This year we have one returning senior in David Bowman, who will catch and pitch for us. With the low numbers, younger guys will need to step up and assume a leadership position as well.”

“We bring back Easton and Jaxon Richmond who were two other starters that will be big pieces of our success this year.”

“Landon Fackler, a sophomore, is one of the kids who has grown and made huge strides. We expect him to be another guy to help carry us. “

“Overall, we expect to compete in the BBC every day. With the new schedule of league play we now only get one shot at a team, which I feel will make teams rely more on pitching than ever before.”

“The league as a whole will be competitive and every team has to bring their best every day.”

“There really is not a clear-cut team at the top. Edon, North Central, and Hilltop are probably teams to watch for, but it’s the team that plays the best that day that can win the game in our conference.”

SEASON OUTLOOK: “This great group of young men look to work hard and be successful by improving each day and look to compete for a BBC championship and long tournament run.”

SEASON OUTLOOK: “Our team has been working hard and have been showing improvement every day in practice.”

“Gideon Myers (4-2) will return after a strong junior season on the mound. He will be looked at as our number one pitcher and play SS/2B when not pitching.”

“Josh Norr is our top returning hitter from last year (.308 avg, 27 RBI, 22 runs scored). Due to his versatility, he will be asked to play multiple positions depending on the day.”

“Josh Basselman (P, 2B/3B) and Nate Rupp (P, 1B, CF) will provide needed experience and will help solidify our defense.

“We will need to have guys step up in a hurry to replace the 7 seniors from last season.”

“We hope to come out and compete in every game we play. We will be starting 5 guys with little to no varsity baseball experience.”

“The growth and experiences these young guys get from the early season games will help tremendously later in the season.”

“I expect North Central and Edon to be at the top of the league this year.”

PLAYERS LOST FROM LAST SEASON: None

SEASON OUTLOOK: “We look to be competitive this spring. We bring back our entire roster from last season and we have added some promising student athletes to our program.”

“We believe our non-conference schedule will prepare us for our tough league schedule.”

“With our non-conference schedule and league schedule, we feel it will help prepare us for the tournament.”

“We know that we must play our best baseball every day in order to be successful.”

“The BBC is a very tough baseball conference. The league has a lot of great programs, players, and coaches.”

“We feel that we can compete for a league championship this year, but know we have to play our best to win the league.”

“The league will be wide open this year. North Central returns two of the top arms in the league, Montpelier brings back a ton of offensive experience, Holgate is always tough and they play fundamental baseball, Pettisville is always well coached and they compete, and Stryker and Fayette are improving and will be very competitive.”

“The BBC should be a fun conference to watch this year.”

SEASON OUTLOOK: “This team appears to be very excited for the season. The energy at our practices has been great so far and they seem hungry to prove to the area that we can compete.”

“I feel like we have the ability to contend in our league and also have enough depth to be much better than what we were last year outside of conference. “

“We have a very tough opening schedule so it will be key for us to maintain a positive attitude and work ethic as we move into conference play.”

“Montpelier has won three straight league titles, so they have earned the right to be called a favorite even though they graduated a large portion of their contributors.”

“North Central looks to have a very competitive team this year and well as Edon while Pettisville has built a tradition of always being a tough out.”

SEASON OUTLOOK: “I am positive and exited for this upcoming season. I feel we should be competitive in all our games this season.”

SEASON OUTLOOK: “The area coaches have been very welcoming to coach Brody Shock and I. As first year coaches, they’ve helped us find answers to many questions.

”Our athletic director, Kent Holsopple, has also been super supportive in getting us prepared for our first season.”

“I look for Edon, North Central and Holgate to be the teams to beat in the BBC. Overall, the league is balanced.

SEASON OUTLOOK: “We look to be competitive in our first season in the BBC.”

Be the first to comment on "2022 BBC Baseball Season Preview"