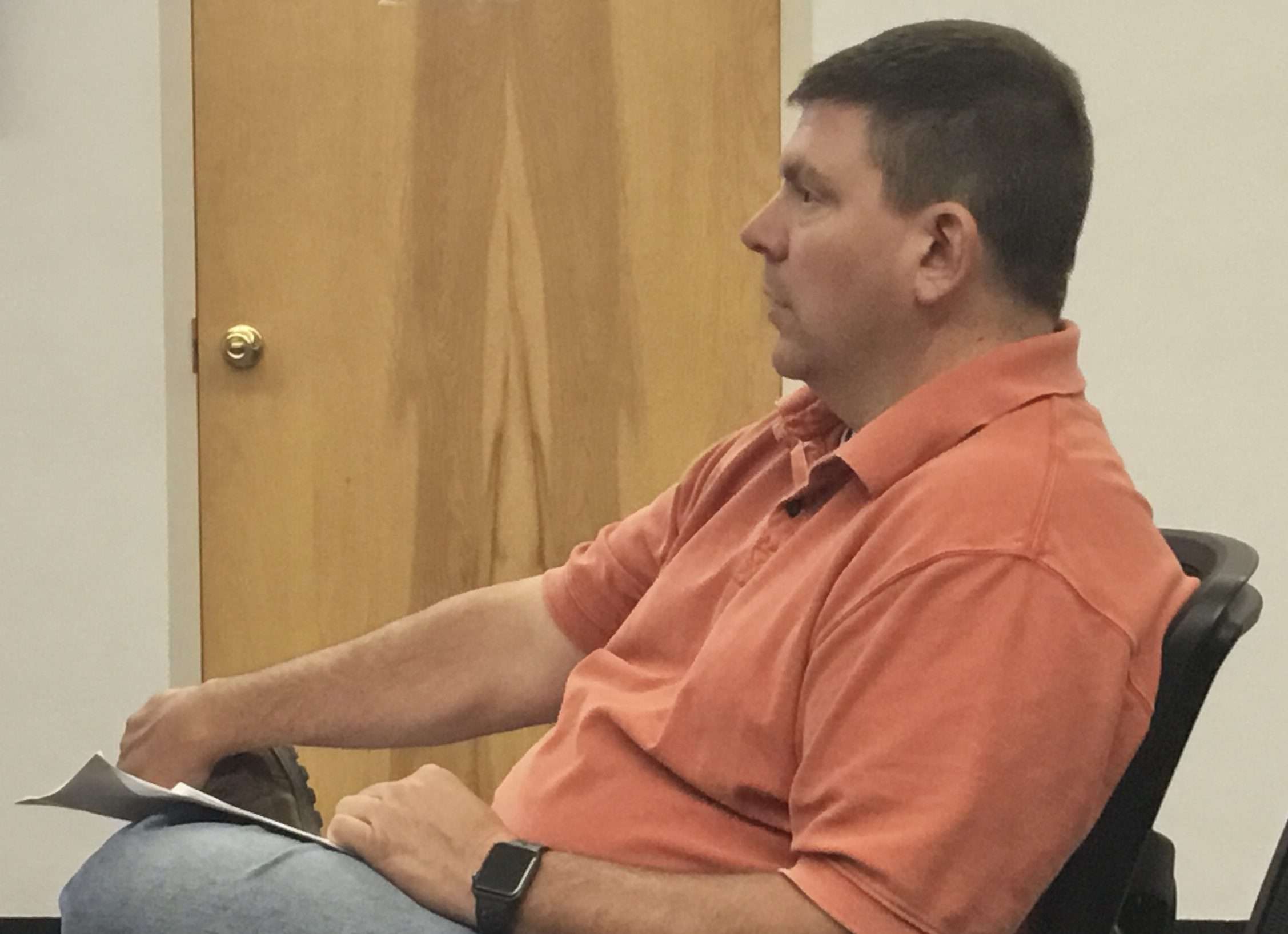 DITCH HEARING … Williams County Ditch Engineer Brian Fritsch recommended to the Commissioners that something other than what was requested by Planson Farms be done to ditch 736, thus asking them to deny the petition. (PHOTO BY REBECCA MILLER, STAFF)

Brent Wilson, with Airport Authority, spoke with the WC Commissioners at the Monday morning, September 20, 2021 session, explaining some adjustments that need to be made. The first topic was the EMA/Airplane storage hanger which they plan to build.

Due to the cost of materials going up, they held off on taking bids, and feel they should adjust the estimate to 1.6 or 1.7 million instead of one million. He said he just wanted them to be aware that it is going to be higher than anticipated.

They also discussed the position of the doors on that building, the build up of the land, the sewer and water for it, whether a buyout is possible, and the need for something to be done about the fuel system at some point.

In regular business, the commissioners voted to approve Supplemental appropriations on behalf of Common Pleas Court; Minutes for Sept. 16 and payment of bills; as well as Signing the following: Permit for use of county property, Bryan Development Foundation use of the bandstand for musical and theatrical entertainment during the Christkindl Market, Application for Valuation deception for destroyed or damaged real property, Letters to Ability Center, Cancer Assistance, Dept. of Aging and Wedco about the East Annex Lease Agreements, and a Permit to Work within county road Right of Way limits on behalf of American Transmission Systems, Inc.

Following a short recess, the Commissioners held a continued Final Hearing on Ditch 736 Planson, which is near Stryker.

Ditch Engineer Brian Fitch gave a brief update, saying that he had contacted other landowners and they are willing to sign for tile repairs so that the county can go through and replace the tile from the outlet up to St. Rt. 34.

The county will also clean out a small portion of open ditch and one owner is having a contractor lower a crossover.

Concerning another major portion of the ditch, Fritsch said that “Mr. Planson would like to take care of that at a later date and then repetition that to be placed under permanent maintenance.”

Following some discussion on the point as to whether it would require a bond, if it is re-petitioned, and the agreement that it would, the commissioners asked Mr. Planson from Planson Farms if he is in favor of how that would all work out in the end.

Planson responded that it is not totally what he wanted but it is better than nothing. He said he does not agree with Mr. Fritsch about whether the ditch needs to be dipped, saying it “does need to be dipped and kept on permanent maintenance.

Probably what is going to happen is I am going to do it myself and hopefully somebody will chip in their share. But we will see what this tile does first.”

Commissioner Terry Rummel made a motion, “That we deny this petition, with the caveat that the next set of Commissioners, if you do clean that, that we would consider waiving that bond and you would reference these notes when you come back up.”

“At least it is said in this meeting that we would consider waiving that bond for the permanent maintenance. Then your children won’t have to go through this also.”