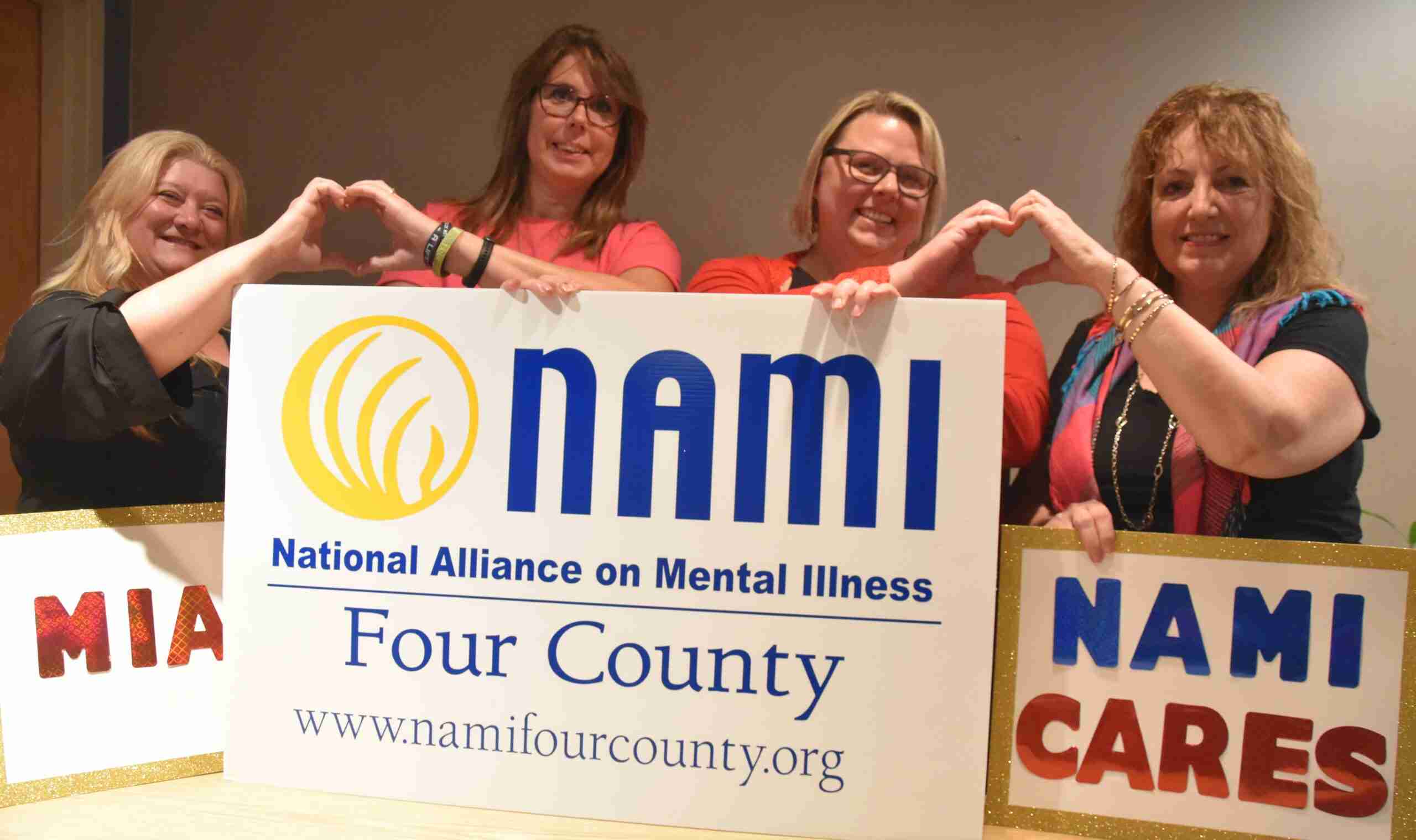 MENTAL HEALTH AWARENESS WEEK … NAMI Four County will hold walks to kick-off Mental Illness Awareness Week (October 3 through 9) at 6:30 p.m. on Sunday, October 3 outside the court houses in Defiance, Bryan (northwest corner of court house) and Wauseon and at the pocket park on Washington Street in Napoleon. From left, the coordinators are Sarah Hankinson, Wauseon event; B.J. Horner, Napoleon event; Katie Beck, Bryan event; and Wendy Jennings, the Defiance event. Not pictured is Jammie Richmond who is a coordinator for the Bryan event.

Mental health affects everyone. And, more Americans than people might think have symptoms of a mental health condition – one in five or more than 48 million adults.

All of the numbers come from the Substance Abuse and Mental Health Services Administration (SAMHSA) from 2019 – a year before COVID’s impact.

These amazing statistics, and a few more, are what NAMI (National Alliance on Mental Illness) and its northwest Ohio affiliate hope to raise awareness about the first week of October for national Mental Illness Awareness Week.

NAMI Four County will hold walks to draw attention to mental health at 6:30 p.m. on Sunday, October 3 in Defiance, Bryan, Napoleon and Wauseon to kick-off the week.

In Defiance, Bryan and Wauseon local NAMI members have arranged a short program and walk outside the court house in each community. In Bryan, the gathering will be held on the northwest corner of the court house. And, in Napoleon the event will be held at the pocket park on Washington Street.

“We would like to encourage the public to join us,” said Wendy Jennings, executive director of NAMI Four County.

“During Mental Illness Awareness Week, we hope to educate the public on how to eliminate the stigma (associated with mental illness) and advocate for better access to mental health care. Each year, our movement grows stronger as we shine a light on mental illness.”

Even though 20 percent of adults and 16.5 percent of youth have symptoms of a mental health condition, fewer than half of the adults (45 percent) and about half of the youth ever seek treatment.

The number of persons seeking medical help increases to two-thirds for those with a severe mental illness.

For some, the shame of seeking treatment for a mental health condition prevents them from doing so.

“By coming out to our kick-off event at the location closest to you, we are making a statement to reduce the stigma and encourage families to seek help for a loved one,” Jennings said.

“The theme of this year’s week is ‘Together for Mental Health.’ Throughout the week, we will use our social media platforms to advocate for better care for people with serious mental illness.

“We will be raising the voices of people with serious mental illness and the need for improved crisis response and mental health care,” Jennings said.

Untreated mental illness can be deadly. An estimated 90 percent of all suicide deaths can be attributed to mental illness – many times it’s an untreated illness.

Wendy Jennings is the coordinator of the Defiance event, while Katie Beck and Jammie Richmond will coordinate the Bryan event; Billie Jo (BJ) Horner, the Napoleon event; and Sarah Hankinson, the Wauseon event.