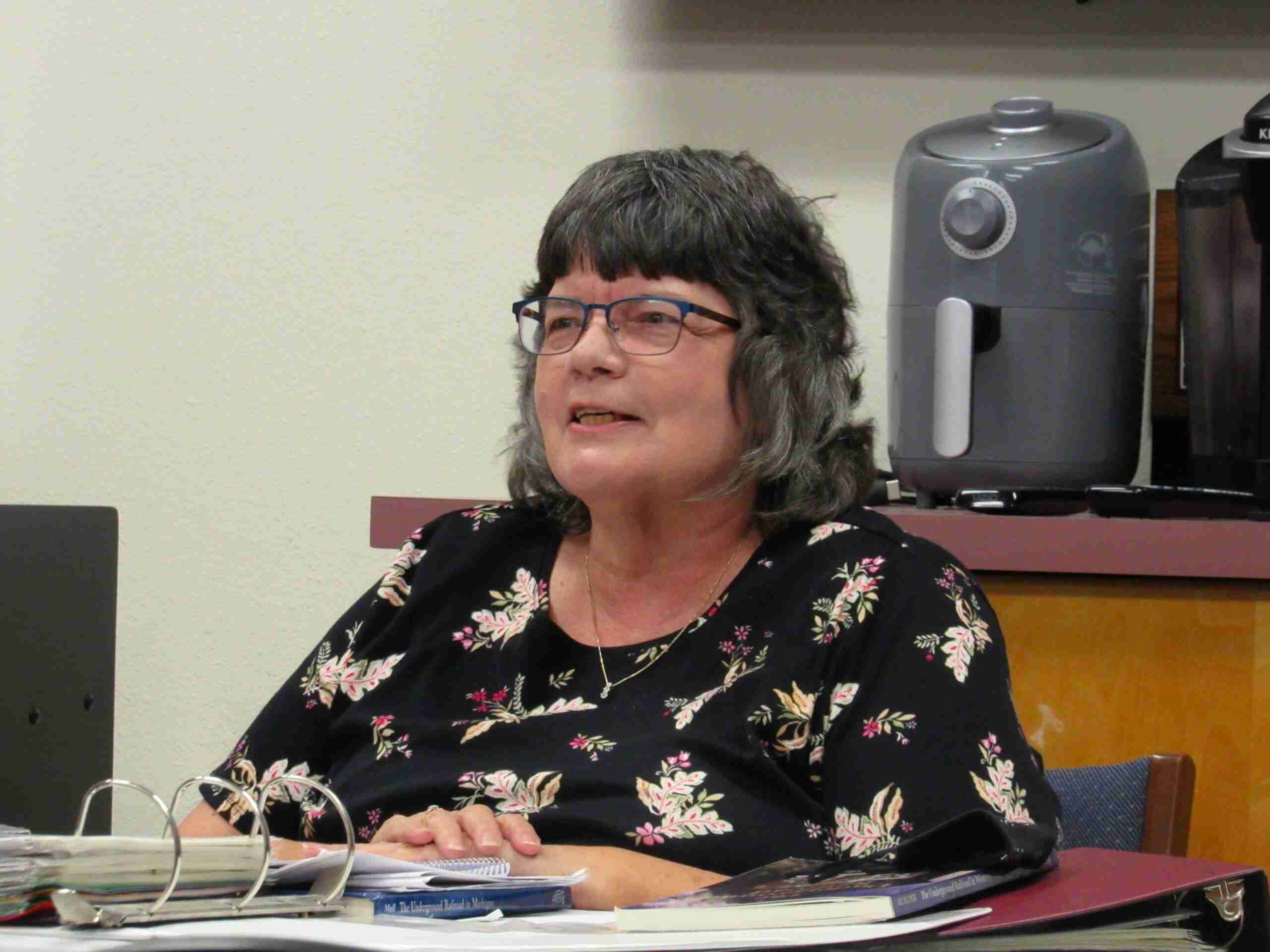 UNDERGROUND RAILROAD WAS WHERE? … Colleen Rufenacht talks to everyone about Ezekiel Masters. (PHOTO BY LACIE FISH, STAFF)

A presentation in the Underground Railroad took place Tuesday the 21st at the West Unity library at 6pm. Colleen Rufenacht led the education and historical, “Underground Railroad Was Where?” on Tuesday night. Colleen is a historian at the Bean Creek Valley History Center in Fayette, Ohio.

Colleen and the History Center will be starting up Heritage Studio. Heritage studio will be a place for the history center to recorded YouTube videos of Colleen in a chair talking about the history of surrounding areas.

It will also be a place for others to come in and tell their stories and get a copy of it for their families and the history center will keep a copy for themselves. The YouTube channel will be called, “You Are There with The Traveling Armchair.”

Colleen talked about history in Williams County and surrounding areas. She told everyone about Nathan Alvord from Alvordton Ohio and his brother William Cullen Bryant, the poet.

She told a story about being a little girl and looking at family photo albums. An anti-slave meeting in Bryan, Ohio was mentioned from the 1850s and she said that 25 men were there from Williams County. Two of them being P.W. Norris and Ezekiel Masters.

Colleen mentioned a place called Masters corners which is very close to the Fulton-Williams County line. This is where Ezekiel ended up residing. P.W. Norris settles in Pioneer and soon after that “slashed” a trail to Fayette to claim Jane Cottrill as his bride.

Colleen talked about a book by a local man Called “Follow the Drinking Gourd”. This book is by Heath Calvin Patten and is about Williams County and the Underground Railroad. The title is taken after an old slave song.

The book is a two-part investigation into northwest Ohio’s role in the network of clandestine routes and safe houses used by 19th-century black slaves in the United States to escape to freedom in the North and Canada.

The book focuses on findings from archaeological findings of the Henry Newman log cabin which is in Williams County and is believed to be an Underground Railroad station.

This presentation was interesting and full of information about Williams County as well as other surrounding places like Hillsdale, Camden, Grandville, Waldron, Pittsford, and Lost Nations. Colleen is a wonderful speaker and very easy to listen to and get into what she is saying.

If you are interested in The Underground Railroad I suggest getting ahold of the Bean Creek Valley History Center in Fayette and talking to Colleen. The History Center is located at 318 W. Main St. Fayette, Oh.