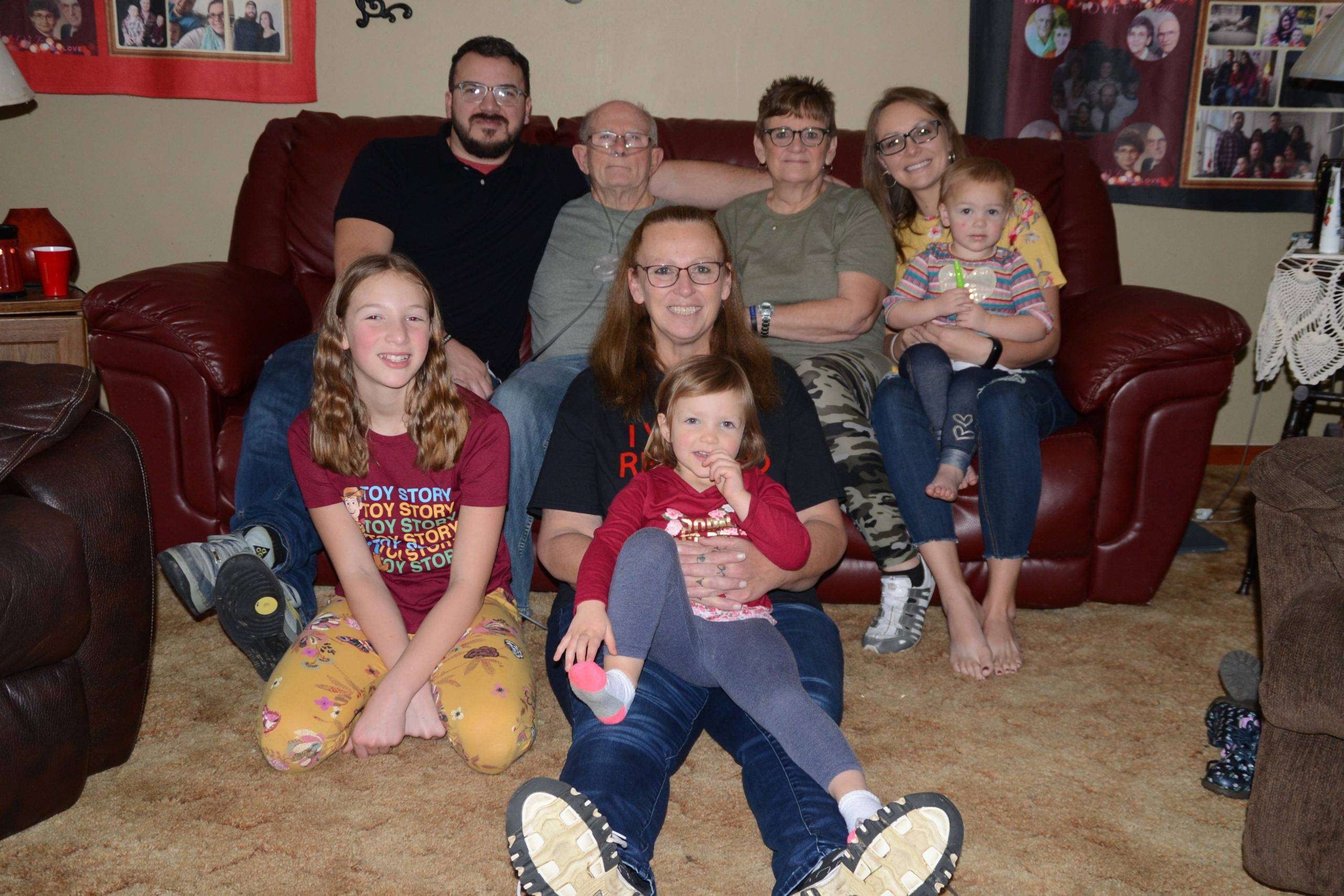 ON THE WINGS OF ANGELS … Thanks to the Angel Foundation, Bob and Alice Hollstein will be spending one more Thanksgiving surrounded by family. (PHOTO BY TIMOTHY KAYS, STAFF)

The Thanksgiving and Christmas holiday season has, at it’s very core, family. It’s a time for family bonding. It’s a time when special family memories are made…memories that last a lifetime. What happens though, when that family is facing a reality that this will be the last Thanksgiving spent with a family member who is suffering a terminal illness?

That reality is being faced by the Hollstein family of West Unity. Bob Hollstein, the family patriarch, is receiving Hospice care for late stage pulmonary fibrosis. There is no cure for the disease, and his physicians can do little but try to slow the progression of the condition, and make him as comfortable as possible as he enters his last days.

Community Health Professionals Hospice has a hand in that mission as well, but they have an affiliation that helps boost the soul where the body is failing…the Angel Foundation, a nonprofit organization dedicated to fulfilling the wishes of terminally-ill adults living in Ohio. Bob informed his Hospice social worker that he had a special wish…one final Thanksgiving with his family.

The problem was that his grandson, Jay Moore, and his family moved to Oregon less than a month ago to start a new church, and could not afford the nearly $2,600 flight. The Angel Foundation stepped in, and Moore his family were able to fly in from Oregon on November 19, and plan to stay until November 25 for a final visit.

If the name Hollstein sounds familiar to you, it for good reason. Bob served with the Alvordton Fire Department for over 50 years. His wife of nearly 50 years, Alice, used to be the manager of the West Unity Senior Center, and for nearly a quarter century, Bob pitched in there too. This is a family dedicated to service.

“I have to slow down what I’m doing,” Bob said. “I have to take my time. I run out of air pretty fast.” To help him breathe, he wears a nasal cannula, through which he is receiving six liters of oxygen. “It’s stressful,” said Alice, “…because he can’t do what he used to do. And so I’m the one that’s doing it. That’s not to say that I mind. I don’t mind it all; I would do anything for him.”

“It just it breaks my heart to see him not able to do anything. The things that he loved the things that he’s always done, like mowing the yard, snow blowing, raking leaves, that kind of stuff. He just loved being outdoors and doing things outdoors. He can’t do that anymore.”

If you think not being able to mow the yard is no big deal, you need to refer back to the earlier statement on Bob Hollstein and serving. “He did three neighbors, besides us,” Alice said. “Every winter he did our driveway with the shovel, and then he’d go to the neighbors, and then across the street. He can’t do that anymore. He’s done that for eight years.” “It is very frustrating,” Bob said.

“When he first got Hospice in the early part of October,” Alice recalled, one of the nurses had said something about Hospice having what they call Angel Wish, which is like Make a Wish for kids. So just fill out an application, tell them what your wish is, and it goes before a board and either you’ll qualify or you won’t. So he made his wish to have Jay and Lindsay come home from Portland. They flew all five of them home…Jay, Lindsey, and their three daughters.” “I’m originally from here,” Jay said, “…and right now we’re planning a church in Portland, Oregon. I graduated from Hilltop High School in 2007.”

Jay and Lindsay got the call in the second week of October. They had been there for just two weeks. “Once we got the call,” Jay said, “…it really wasn’t that hard for us to know this had to be done. This was something that is an honor and a privilege that they chose to have us come back.”

“There wasn’t a second thought as to whether we could do it or not. It was difficult to try to arrange things; our schedule gets chaotic pretty quickly. But, you know, this is family. So we’re here for them, and they’ve always been here for us. We knew that we were going to make this happen.”

That faith transcends more than just the family travel plans. It is the tie that binds the family together with ties as soft as silk, and as strong as steel…ties that a terminal disease cannot break. “Death brings forth victory,” Jay said. “We step from one lifetime to another. When I hear he has just a few months left, I know that he’s only a few months away from glory.”

“He gets to stand face to face with our Savior, and it makes me a little jealous. Death doesn’t have the final sting; Jesus paid that price for us. We’re all going to die. We’re all going to go somewhere. I am just thankful that Jesus has paid a price for us through the front door. Grandpa knows where he’s going when he passes, so there’s a victory.”

“Death doesn’t have the final word; it’s not the end of the story. The beautiful thing is that yeah, he will pass on from this earth, and he will pass into eternity. But he’s going to pass into eternity in the glory of God, our Father and the Creator of all things. There’s beauty in that; that’s victory, and we’ll see him again.”

Lindsay added, “The beauty of it for me is knowing can God touch him and heal him? Absolutely! God can touch them and heal them in an instant. But I feel like as humans, we want our will done. What we need to be asking is that God’s will be done. And if it is God’s will for him to be here 20 years, that’s possible for Him to do because He can do anything.”

“But ultimately…we all want to be in heaven where there’s no more pain, where there’s no more sorrow, where you don’t have to worry about health or anything like that, and we get to all spend eternity together. And so I think that hardest part is death is harder on those that are left behind.”

“There’s a lot to celebrate,” Jay said. The time of mourning will come, but right now it’s a time to be thankful. It’s a time to be grateful for another day with him, another time with him…to make more memories.”

With tears in his eyes, Bob said with confidence, “I know where I’m going. I will say that. God has been with me, and He showed me that not too long ago.” Pausing for the tears and gathering his composure, he continued, “…because I asked Him. I said, ‘Please tell me that You’re with me,’ and He did. I know He’s there. I know He’s with me…with all of us. I know it will be beautiful. I’ll miss everybody, but I know that they’ll be well taken care of.”

“I am just so thankful for a lot of things,” Alice said. “I’m thankful he’s still here, and I think without Hospice, he wouldn’t be at this level…he’s not progressing. I’m thankful that we’re all going to be able to be together as a family. We’re a close family.”

“There’s healing in that, especially at a time where you’re preparing for the end. There’s a sense of healing that comes with understanding that God’s going to take control, and He’s got to take care of everything.”

The Hollstein family gathered together for Thanksgiving dinner on November 23, a bit early on the calendar, but the calendar is just a formality. Bob is hoping to be able to still be around next June so that he can have one more celebration, that of his 50th wedding anniversary with Alice.

Whether that comes to pass or not is entirely in the hands of God, and Bob is more than good with that situation. He knows that he is a child of the King, and that his Heavenly Father is with him every second of every day.

Speaking of the faith of the patriarchs in Hebrews 11, the Apostle Paul said, “All these people died in faith without receiving the promises, but they saw the promises from a distance and welcomed them. They confessed that they were strangers and immigrants on earth.”

“People who say this kind of thing make it clear that they are looking for a homeland. If they had been thinking about the country that they had left, they would have had the opportunity to return to it. But at this point in time, they are longing for a better country, that is, a heavenly one.”

Bob Hollstein has seen that ‘better country’, and he and his family know that he has first class reservations for the trip. What could elicit more thankfulness and gratitude than that…Thanksgiving Day and beyond?