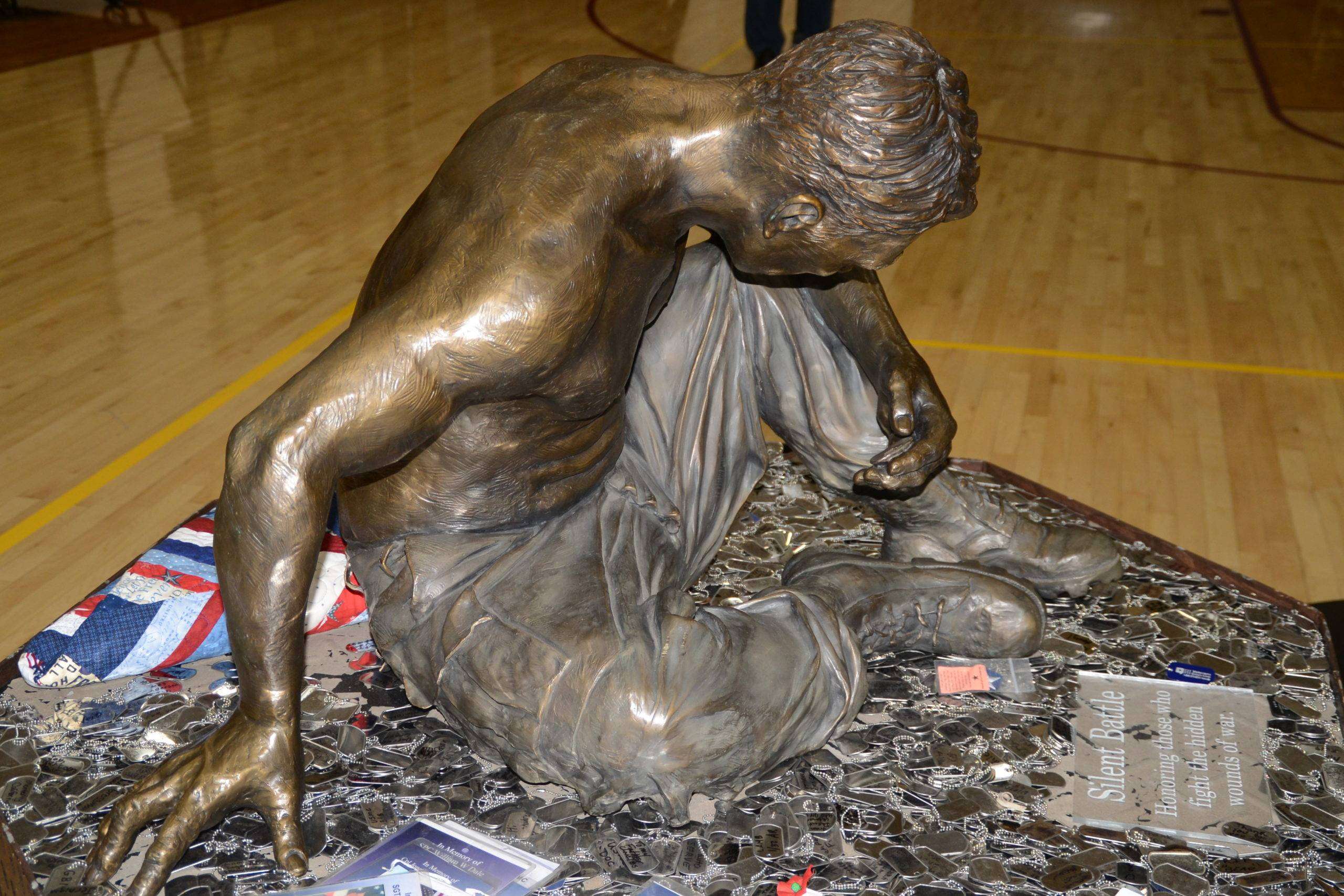 The presence of the Eyes of Freedom Memorial in the gymnasium of the Edgerton School on the morning of November 18, did not merely coerce the attention of those present, it compelled it.
Looking into the eyes of the life sized portraits of the twenty-three members of Lima Company 3rd Battalion, 25th Marines who gave their lives in service to their country reaches far beyond the heart and mind. Seeing the combat boots underneath the identification plaque of each soldier is more than a moving experience. It connects with the very soul of every American who visits the traveling memorial.

Adding to the experience is the life-sized bronze sculpture in the middle of the portrait panels. Entitled, ‘Silent Battle’, the sculpture is of a seated soldier, gazing at a military dog tag in his left hand and representing those who have returned home, but still fight a silent war against the effects of post traumatic stress disorder, grief and other emotional issues arising from the theater of combat.

A special assembly was held in the Edgerton gymnasium on the morning of November 18 to not only honor the fallen from Lima Company ‘Three Deuce Five’, but to also pay patriotic homage to local veterans who were special guests of the school on this day.

Attendees made their way to the gymnasium through a gauntlet of students holding American flags. Once inside the gymnasium, the veterans were escorted to a special seating area, while students, faculty, staff and guests took seats in the bleachers. The audience was regaled with patriotic songs performed by everyone from the bands, to the school choirs…including several numbers performed by the elementary students.

District Superintendent Kermit Riehle welcomed everyone to the event, and gave a brief outline as to what events were to come, one of which was the ceremony of the folding of the American flag. “One of the most impactful things we’ll see today,” he said, “…is the ceremony of the flag folding, something that brings great meaning to our freedom, to our heritage in the United States of America, and I think you’ll enjoy it greatly.”

“This morning, we have with us two Edgerton Board members who have also served in the military…Mr. Bob Siebenaler, Chief Master Sergeant in the Air Force, and Mr. Tom Flegal, who was a Sergeant in the United States Marine Corps.” Step by step, Mr. Siebenaler and Mr. Flegal folded the flag, with Mr. Riehle announcing the purpose and the meaning behind each of the thirteen folds.

Mr. Riehle introduced Lance Corporal Mike Strahle of the Columbus, Ohio-based Lima Company. A 2003 graduate of Bryan High School, Strahle was assigned to the First Platoon, and found himself in Iraq in early spring of 2005. On May 11, while conducting combat operations in the Al-Anbar Province near the Syrian border, the vehicle in which he was riding hit an IED, an improvised explosive device, in the road.

Six members of his squad were killed in the blast, and Strahle, grievously wounded, was evacuated for a long road of medical care and recovery. He now travels with the Eyes of Freedom Memorial across the nation. The memorial honors all who serve in the American military, past, present and future.

“Four years have passed like you wouldn’t believe,” Strahle said, “…and we are honored to have the Eyes of Freedom come back to Northwest Ohio. I have a really blessed life. I’ll just start with that. I had the honor of serving with some pretty fantastic men that are located behind me here.”

“We kicked a lot of butt overseas in Iraq in 2005. And I know many of you weren’t even born yet when that was happening, but on the other side of the world, there was an entire country that was being bullied around.”

“No matter whether you thought we should go help or not, when we got there, we realized how bad that they truly did need our help. We went there, and we provided that help, and we did a really great job at that. But the cost of all of that hugely successful eight months overseas, the cost of that is right behind me.”

“And that’s only the beginning. You know, there’s a lot of us that came home, and there’s still a cost being paid. I’ll tell you a little bit about that in a minute, but the mission continues; we continue to travel the country. I was banged up pretty good in 2005, and I’ve made a full recovery. It’s because of this mission behind me that that is even possible, and help from my family right here in front of me. We continue to roll around the country and honor everybody that’s ever served…then, long ago, now.”

Strahle spoke briefly about the history of the memorial, saying it, “…was originally called the Lima Company Memorial because in 2005, these guys were taken from us far too soon. And because it was a reserve unit, a lot of our guys are all within Columbus, Cincinnati, maybe Dayton, maybe from Northwest Ohio, Bryan. But we were all Ohioans, most of us. And when you lose 23 men of any unit, it’s going to draw attention.”

“But when 18 of those 23 guys are all Ohioans, it draws quite a bit more. And the one great thing that came from all of that attention in 2005 is the phenomenal woman named Anita Miller, that worked with all of the families of these men to paint them life-sized. It took her about two and a half years in total.”

“We’ve been working with the Quilts of Valor for several years now,” Strahle said. “The Quilts of Valor Foundation…is a national organization, a national network of quilters that work together and present quilts to veterans that have served. I received my quilt of valor at the National Naval Medical Center. Today, I’m proud to introduce Lacy Spurgeon, who is from Wauseon here in Northwest Ohio. We are going to bring Lacy up here in a second, and we’re going to present a Quilt of Honor to a fallen service member family.”

Spurgeon, a disabled Army veteran, served from 2008 to 2016, and now serves with the making of the quilts. “I received my Quilt of Valor in 2014,” she said. “I have gone through a lot in my service career, as many could also say, but being a part of Eyes of Freedom has been great. It’s not only helped me heal, it’s helped many, many veterans heal as well, especially with the new Silent Battle sculpture.” 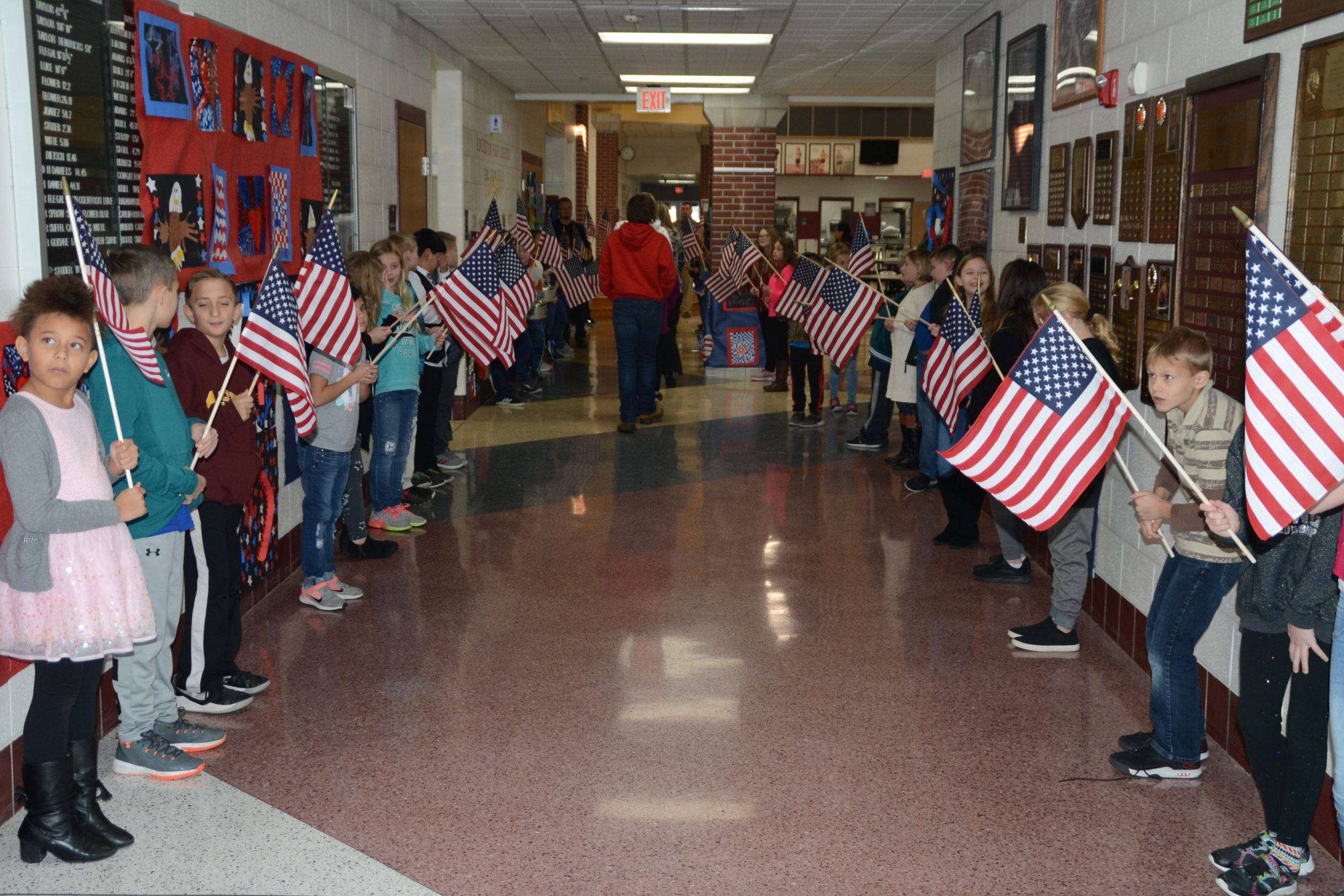 “What Quilts of Valor do is, we have groups all over the country that create quilts. As you can see, there’s one sitting over there, and we all do it by hand. There’s many, many people in this country that love our veterans, and we create these awards so that we can comfort and heal veterans. We have already given out over 100,000 Quilts of Valor in our 10 years of being a foundation.”

Spurgeon continued with a special presentation. “PFC Brandon Kreischer was KIA, or killed in action, on Monday, July 29, 2019, during combat operations conducted in Kandahar Province, Afghanistan. Today, the Quilts of Valor Foundation is honored to present a Quilt of Honor to Grace Kreischer, whom he married on January 28, 2019, in Fayetteville, North Carolina, and his unborn son, Callum, expected in December. Mrs. Kreischer came forward, and Spurgeon and Strahle placed the Quilt of Honor over her shoulders.”

Strahle thanked the students for their kind attention and attendance, and encouraged them to bring their families and friends out to see the memorial.

After the ceremonies, Mr. Riehle said, “Every year we commit to providing a memorable Veterans Day experience for our students and staff. My father served in the Army, and so I feel strongly about my patriotism, and the patriotism I’d like to work through into our students and our staff.”

“So every year we’re going to do something that hopefully is memorable and well done. This year the Eyes Of Freedom organization, the Lima Company, out of Columbus is no exception. We had them here four years ago and just love the message that they bring.

And even now in the last four years, they’ve added some new stations, and have offered some new things for the kids to see. So we’ll have five different schools around the Williams County area that will be attending today and tomorrow.

“We invite the communities in the area to attend, and would love to have you here and view the Eyes Of Freedom Memorial if they’ve not seen them in the past…and even if they have, come back and see them again. They just have a really lasting impression. I’m excited as superintendent just be able to offer these types of programs to bring honor to our veterans. It’s very important for young people to understand the level of dedication that it takes to serve in the United States military.”
That’s why we’re here.