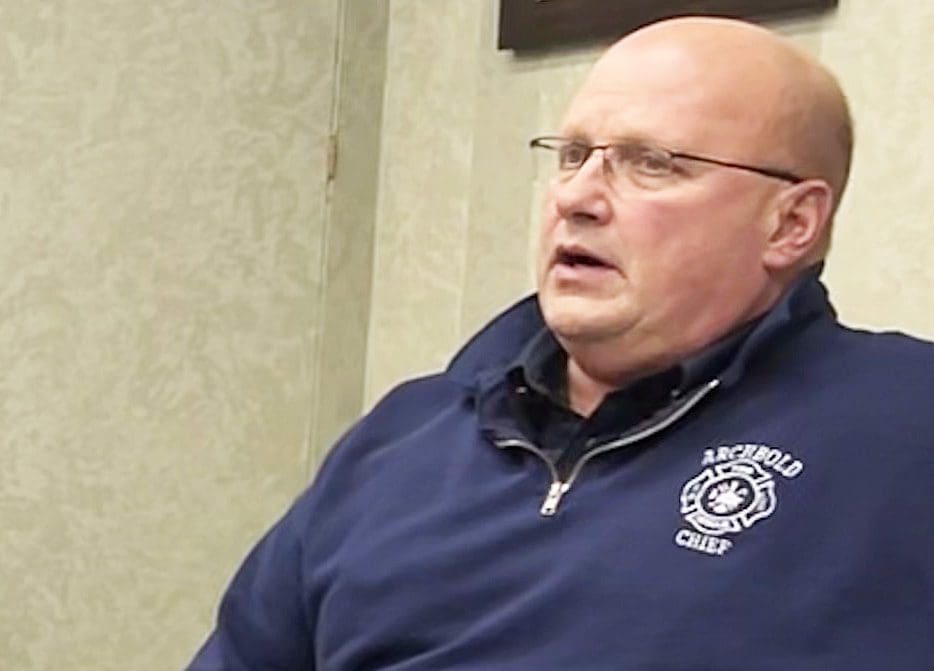 2022 YEAR IN REVIEW … Chief Dave Davis from the Archbold Fire Department was on hand to present the Fire and EMS Year in Review 2022. (PHOTO BY AMY WENDT, STAFF)

Archbold Village Council met on Monday, January 16, 2023, with all members except councilor Kevin Morton in attendance.

Chief Dave Davis from the Archbold Fire Department (AFD) was on hand to present the Fire and EMS Year in Review 2022.

“Last year was a record year for calls for us,” Davis explained. Due to the new contract with the central station, Morenci, MI Fire Department has picked up some of the calls near Fayette that Archbold would have normally received in the past.

AFD’s response to calls in that area was down 100-150 from the year before.  However, the department “had 125 calls more just in Archbold alone.”

Davis shared that the AFD is currently working on recruitment and retention since the department has some people who are getting close to retirement.

The department will need to replace one of those positions with a paramedic.

“We are an aging department we just need to keep that in mind as we move forward to try and make sure we are bringing young blood in,” added Davis.

Aiming to reach students who do not plan to attend college upon graduation and wish to remain in the area, AFD will be holding presentations at area schools such as Four County, Archbold High School, and Pettisville High School to generate post-graduate employment interest from local students.

The department will also be having an open house in 2023 where they plan to show the public the new engine that they will be receiving in January.

Davis shared that Gary Esterline, who will be celebrating his 50th year in the department, has been “working diligently on the training facility” and the department plans to share some of those updates with the public at the open house.

“Overall, I thought it was a really good year,” Chief Davis concluded.

Following Chief Davis’ presentation, councilor Brad Short commended the chief on a personal note, “I want to thank you and your department for the professionalism that you showed my daughter at her time of need a few weeks ago when you guys responded to her 911 call.”

Short added, “A person doesn’t realize how important it is to have a good EMS and fire department until you need it.”

Wyse reported that progress is being made on the former Nurses Edge building at 202 N. Defiance Street in downtown Archbold.

The Archbold Community Improvement Corporation purchased the property in October 2022.

The roof was sealed before Christmas and “we have a work order from Toledo Edison to get the power turned on, but they are requiring an inspection,” noted Wyse.

The Pop Shop building on Stryker Street was stripped and “we got some things out of that building before it gets demolished that we can use in this building.

The Sherwood State Bank was gracious enough to allow us to do that,” Wyse added.

equipment were removed from the Pop Shop “so we have a few of those things to just keep our costs down.”

Council then heard from Wyse about the “Boomerang” Project, now known as the “Welcome Back Home Initiative,” which is a collaboration between Fulton County and Archbold economic development offices to build a database of roughly 5,000 Fulton County graduates to help county businesses identify and recruit local talent who are now working outside the county or even the state to come back home and work for Fulton County employers.

The group worked with 2014 AHS graduate Kevin Boyers to produce a 9-minute marketing video featuring interviews with 15 AHS graduates who live and work in the Archbold area.

Council approved Resolution 2023-04 accepting a proposal from Northeast Sweepers and Rental Inc. for a RAVO 5 iSeries Street Sweeper with service kits and extra brooms for the Street Department after a suspension of the rules.

Village Administrator Donna Dettling noted that after testing three different street sweeper models, the street department preferred the option that was the most reasonable in cost.

$350,000 was budgeted for the new equipment upgrade and the village’s used street sweeper was sold on gov.deals for $24,850.

Following the suspension of the rules, council also approved Resolution 2023-05 accepting a proposal for two 2023 Dodge Charger Police Package AWD Base Vehicles for the police department and declared an emergency.

Council approved Resolution 2023-06 authorizing the issuance of a “Then and Now” Certificate Pursuant to Section 5705.41(D) of the Ohio Revised Code and declaring an emergency after suspension of the rules.

Dettling noted that this resolution was required to pay the last 2022 installment of the water tank project since the bill was dated in 2022 but is actually being paid in 2023 and is over $3,000.

Dettling explained that is a housekeeping item required to comply with procedures set forth by the State Auditor.

The following minutes and reports were also reviewed by council: