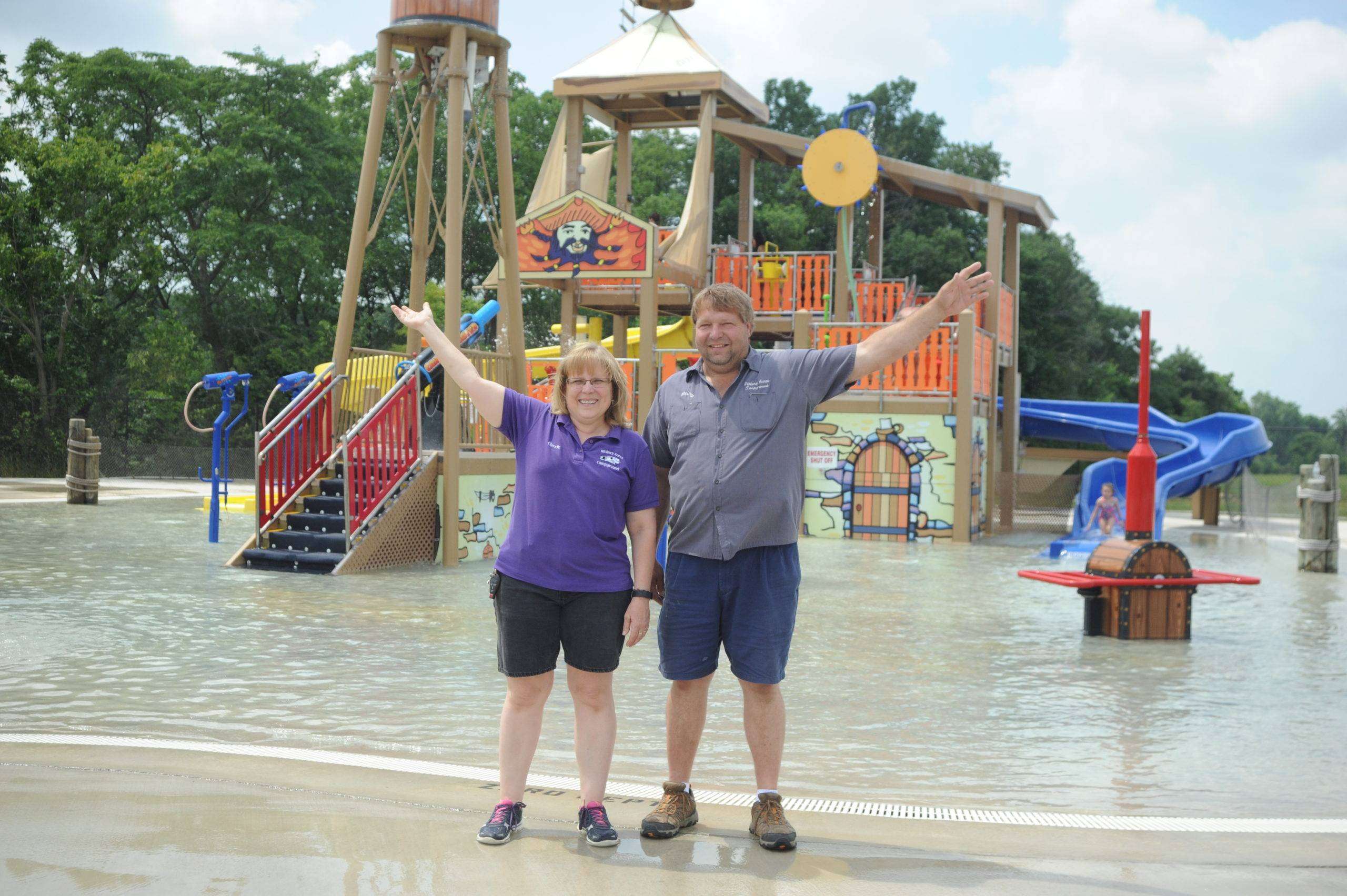 Wassa matter, bunky? Has that perspiration pool that you’ve created gotten to the point where it needs its own lifeguard? Can you identify with a Thanksgiving turkey when it’s basting in its own juices? Is your air conditioner about to file a grievance against you for unfair working conditions? Are the kids are screaming because they’re not just steaming hot…but bored beyond belief?

Is that what’s got you wiping the sweat from your furrowed brow? The kids want to go to a water park, but the idea of driving half way to Cleveland in this heat, then paying a king’s ransom for a few hours of fun before the long drive home doesn’t sound appealing.

It’s too bad there’s nothing close by…right? Maybe not. Is ten miles southwest of downtown Bryan close enough for a REAL water park? Is a 20-minute drive too much for hours of cool family fun? Let me drop some information on you. Maybe you need to talk to Chris and Cherie Kimpel of the Hickory Acres Campground, located on Ridenour Road, just south of the Williams-Defiance County line.

What does a campground have to do with the quest to beat the summer heat, you might ask. The answer is simple. On May 26, 2017, a major expansion to the campground was opened for business…the Black Beard’s Bay Water Park. Hickory Acres and Black Beard’s Bay are probably the best kept secret in the tri-state area…to a degree.

With the July 4th weekend being the busiest of the year for the Kimpels, the activity schedules at the campground and the water park are packed to the gills. Pete Schlegel will bring his stage show to Hickory Acres on the evening of July 3. 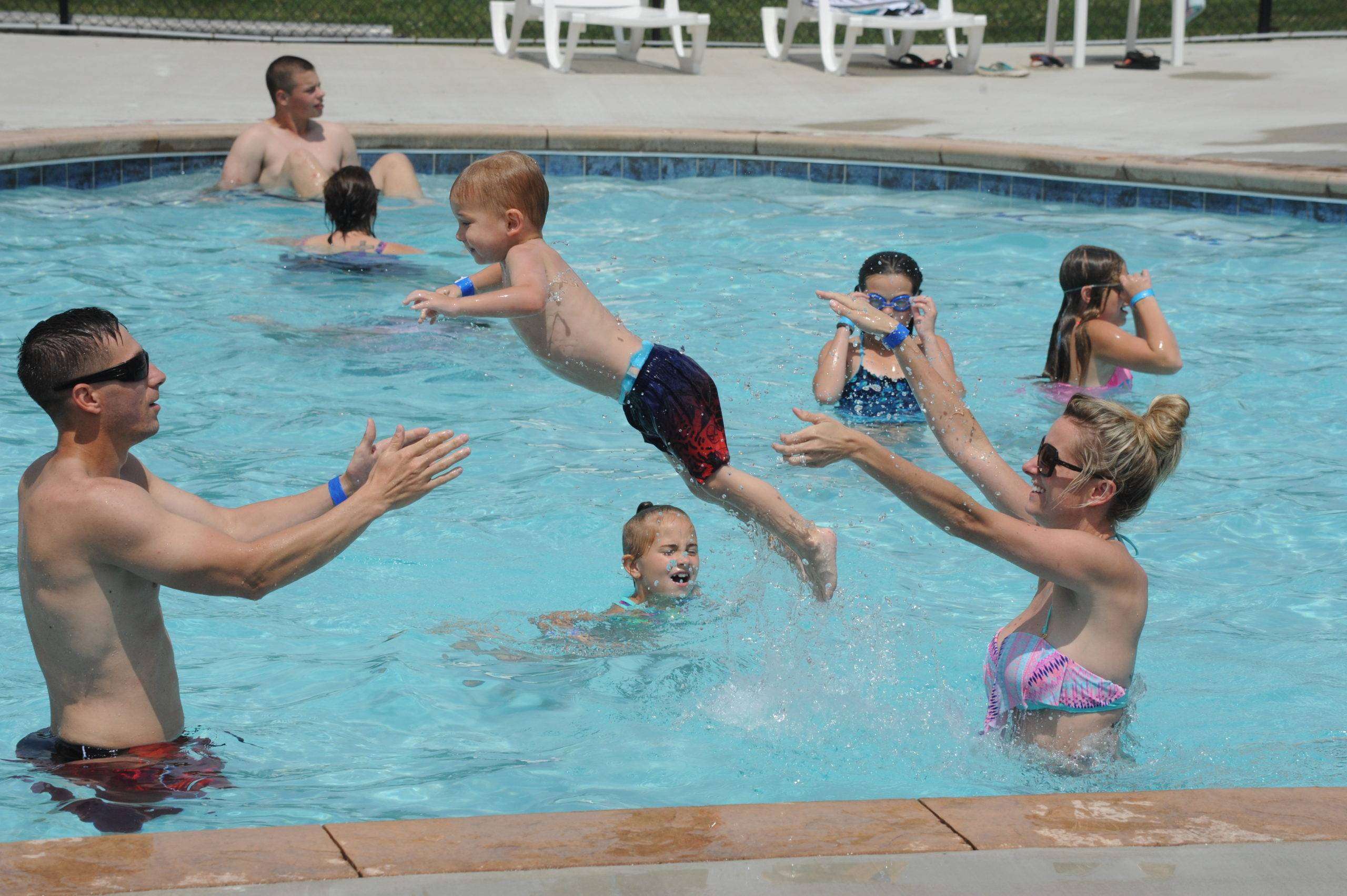 When he leaves the stage at 10:00, the activity continues with a fireworks display. Bear in mind that Hickory Acres is in Farmer Township in Defiance County. There are no towns, villages, hamlets or anything resembling the same on the township map…but this evening is the exception to the rule. The campground and the water park will become a small metropolitan area, with 4,000 to 5,000 people packing the place for all of the family friendly events.

For this weekend, Hickory Acres will become the third largest population center in Williams and Defiance Counties, trailing only Defiance and Bryan in numbers. People come in from as far as Toledo and Fort Wayne, and as far north as Milan, Michigan, to camp at Hickory Acres and visit Black Beard’s Bay. So much for the ‘best kept secret’ status.

“We’ve got Bingo every weekend for the campers,” said Cherie. “There’s kids crafts every other week. There’s a DJ. We’ve got a playground, volleyball, horseshoes and trails. We rent golf carts. We rent paddleboats, kayaks and water trikes…and we’ve got the water park. It’s a fun time for young and old, alike. Enjoy, and feel like a kid again…oh, and it’s a great way to cool off!”

If any of this is news to you, then you need to do yourself and your family a favor by getting in touch with Chris and Cherie toll-free at 877-658-2267, on their website at http://www.hickoryacrescampground.com, or just by stopping in at 1240 Ridenour Road…which is County Road 8 in Williams County. What are you waiting for?

Be the first to comment on "Arrrgh Matey; Black Beard’s Bay Is The Perfect Safe Port Against The Summer Swelter"