Baby Booties Given In Memory Of Charlotte Culler 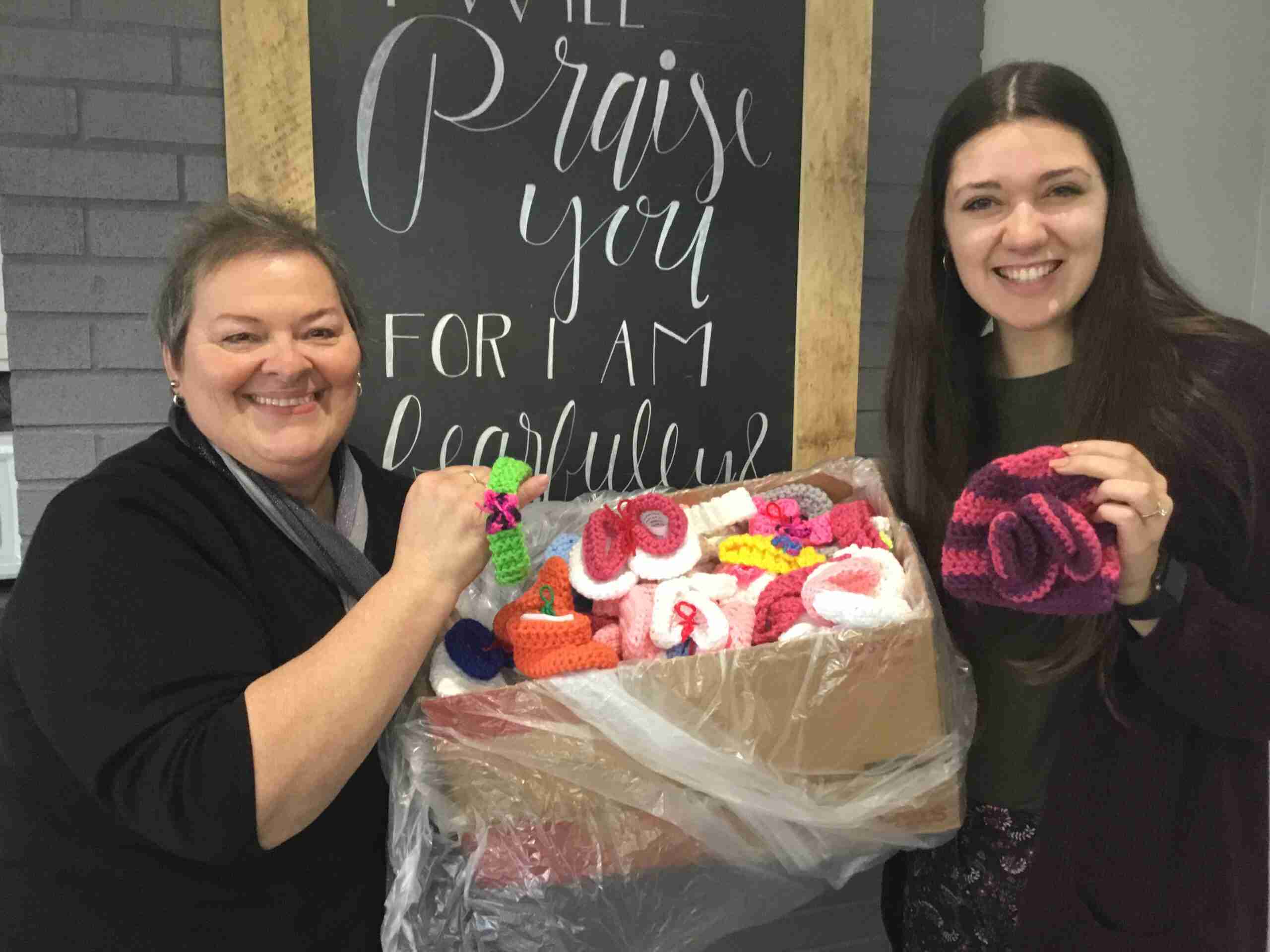 HANDMADE WITH LOVE … Delightfully precious baby booties, headbands, a few tiny infant hats and even a soft baby blanket filled the box which was marked for the Bryan CPC. On Tuesday, December 14, 2021, two ladies who work at this office of CPC Women’s Health Resource, Gina Steele (CPC’s Services Coordinator) and Leah Maassel (CPC’s Community Liason)were thrilled to accept this loving gift in memory of Charlotte Culler. They held the box loaded with the handmade items in front of the verse from the Bible, “I will praise you for I am fearfully and wonderfully made.” (Psalm 139:14) (PHOTO BY REBECCA MILLER, STAFF)

To anyone who knew and loved Charlotte Culler, a resident of rural Bryan, Ohio, it seemed like just about everyone knew her. If you were with Charlotte, she was constantly being stopped by other friends to say hi and give her a hug.

Charlotte was involved in so many ministries, it would make quite a list to put them here, but one thing she did was to never give up on people. She was a teacher for over 25 years and loved every one of her students as if they were her own.

She kept in touch with many of them over the years, writing letters to them and visiting them when they found themselves in a hard place.

Jeff Murray is one of those who was blessed to have Mrs. Culler as his Kindergarten teacher. Many years later when he was incarcerated for a crime he committed, Charlotte would grab a friend to go along and show up to visit him in prison.

About four years ago, she led him into a relationship with Jesus Christ during one of those visits. Murray’s life was changed. He has grown in his walk with God and is now studying to be ordained, in a Seminary offered to the prisoners by a local church.

In 2018 Jeff learned how to crochet and began crocheting items for new babies with the Allen Oakwood Correctional Institution Samaritan’s Club, based out of the prison chapel.

AOCI is located in Lima, Ohio and as Charlotte and her friend Sandy Stokes would visit him there, he began to send boxes or bags of booties, hats, blankets, sandals and headbands for the babies served by CPC Women’s Health Resource of Northwest Ohio.

Charlotte would show up at the Bryan, Ohio CPC, gather anyone there together for a picture to send to Jeff, give them the donation and head back out to be about “more of the Lord’s business” wherever that might be.

This past year, Charlotte Culler got to set aside her many ministries that she did for her Lord, and to go and be with Him in heaven. When the booties were ready for delivery, Murray contacted Sandy Stokes and she bravely drove down alone to get the boxes.

For some reason they weren’t there and Sandy shared that the two of them enjoyed some good fellowship anyway. The boxes had been picked up by Charlotte’s daughter, so Sandy offered to make sure they were delivered to the right places.

In a letter written by Mr. Murray, he said, “The AOCI Samaritan’s Club crochets baby bootees, stocking caps, and baby blankets to be donated to crisis pregnancy centers and hospitals located in Northwestern and West Central Ohio and have been in service since 2018.

Today’s donation was made in loving memory of Charlotte Culler who was a longtime resident of Williams County and championed the cause of the Crisis pregnancy centers nationwide. Charlotte was called home to be with her Lord on April 28, 2021 and continues to be missed while remembered daily.”

The world needs more people like Charlotte Culler and we honor her with this remembrance in memory of her.