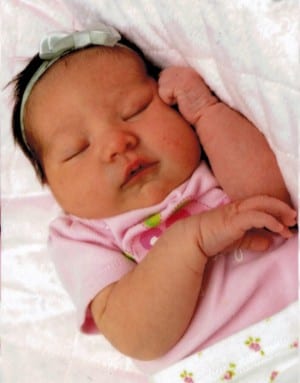 Bailey Jean Starnes, infant daughter of 7 weeks to Carson Starnes and Amber (Shanks) Starnes of Swanton, passed away in her sleep Saturday morning, August 8, 2015. Bailey entered into life on June 17, 2015 at Toledo Children’s Hospital. Her lovable face and soft touch warmed the hearts of many.

Bailey was preceded in death by her paternal grandfather, Alton Starnes.

In lieu of flowers contributions are encouraged to the family. Online condolences may be sent to the family through our website at www.barnesfuneralchapel.com.