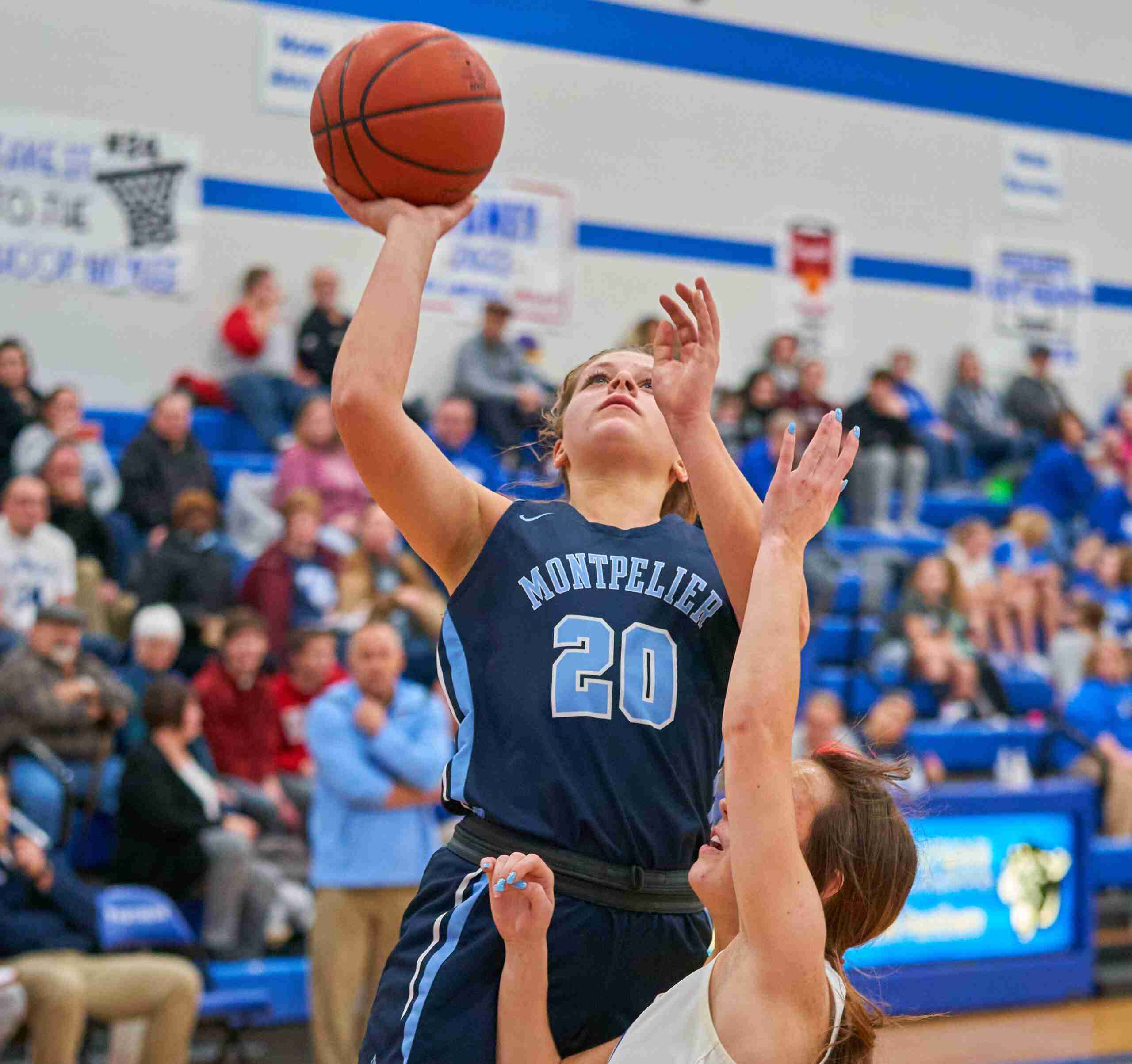 BIG THIRD QUARTER … Montpelier’s Chelsea McCord lays it in after a steal in the third quarter. McCord had 10 points in the quarter and registered a team-high 19. (PHOTO BY RICH HARDING, STAFF)

STRYKER –Montpelier appeared to be well on their way to moving to 4-0 in the BBC when they held a 48-31 lead early in the fourth quarter.

The Panthers wouldn’t go away though as a combination of Loco turnovers and timely three-point shooting allowed Stryker to close the deficit to just two points before falling 63-61 in BBC action.

Montpelier’s Trinity Richmire opened the scoring in the final stanza with a layup to give the Locos a 17-point lead, matching their largest of the night.

Montpelier would respond with field goals by Kelsie Bumb, Chelsea McCord, Richmire and a triple from Jada Uribes for a 9-2 run to push the lead back to double digits at 61-46.

Haylee Fulk then delivered nine straight points by herself for Stryker as she knocked down two shots from deep and had a steal that she turned into a conventional three-point play to make it 61-55 with 1:13 remaining.

After a missed front end of a one-and-one by Montpelier, Emmalee Fulk buried a 3-pointer to draw Stryker to within three points at 61-58.

The Locos then turned the ball over and Stryker’s Sage Woolace drew a foul on a drive to the hoop and would go 1/2 at the line to make it a two-point game.

Freshman Kelsie Bumb gave Montpelier a little breathing room with two free throws to extend their lead to 63-59 with 19.9 left.

On the Panther’s next possession Gabby Ramon would be fouled attempting a three-pointer and she hit the first two free throws before missing the third to cut the Locos lead to 63-61.

On the ensuing rebound after the miss, Stryker swarmed Ariel Page whose pass out of the pressure was intercepted by Woolace but her short jumper to tie the game was off the mark and Alexia Wickerham’s offensive rebound stick back came up short as the Locos got the rebound as the horn sounded.

Woolace started the three-point barrage for the Panthers in the first quarter with a triple from the right wing followed by a two-point field goal from the junior to give Stryker an early 7-4 lead.

The Locos would make their first scoring run of the night by tallying the last six points of the quarter to take an 11-7 lead.

The teams traded buckets to start the second quarter and after a Wickerham layup on a back door cut the Montpelier advantage was trimmed to 16-15.

Montpelier would then put together 7-0 surge with five points from Bumb and an offensive rebound basket by Page to push the lead to 23-15 with 2:07 left in the half.

Woolace ended the run with a triple out of a Stryker timeout, but it was McCord hitting from deep on the right wing to end the half and give the Locos a 28-20 lead.

It was the Chelsea McCord show to start the third for Montpelier as she accounted for the first three field goals of the half to make the score 34-20.

A Woolace bucket ended the run, but Page scored a quick five points to increase the lead to 39-22 before it was Woolace with consecutive treys to cut the Stryker deficit to 39-28.

That set the stage for another 6-0 run from the Locos to end the quarter as Mandy Taylor hit a jumper to start things.

McCord, who had 10 points in the frame, would get a steal and layup followed by an offensive rebound bucket just before the buzzer to make it 46-31 Montpelier heading to what turned out to be a frantic final quarter.

McCord led four Locos in double figures with 19, Page and Bumb had 12 each while Richmire added 10. With her 12 points, Page is now two points of 1,000 in her career.

Woolace led all scorers as she poured in 27 points (17 in the second half) and Fulk hit 3-pointers on her way to 19.