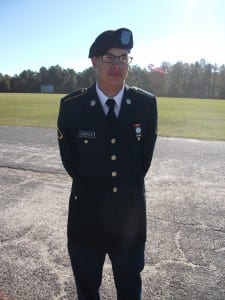 Korbin graduated from Montpelier high school 2010 and was class valedictorian, Korbin also attended University of Findlay 2010/2011 on scholarship as well as Ohio State University 2011 before entering the Army in August 2012. Korbin is currently serving at Fort Lee in Virgina for ordinance training until approximately August 1, 2013.

Be the first to comment on "Boot Camp Graduate"