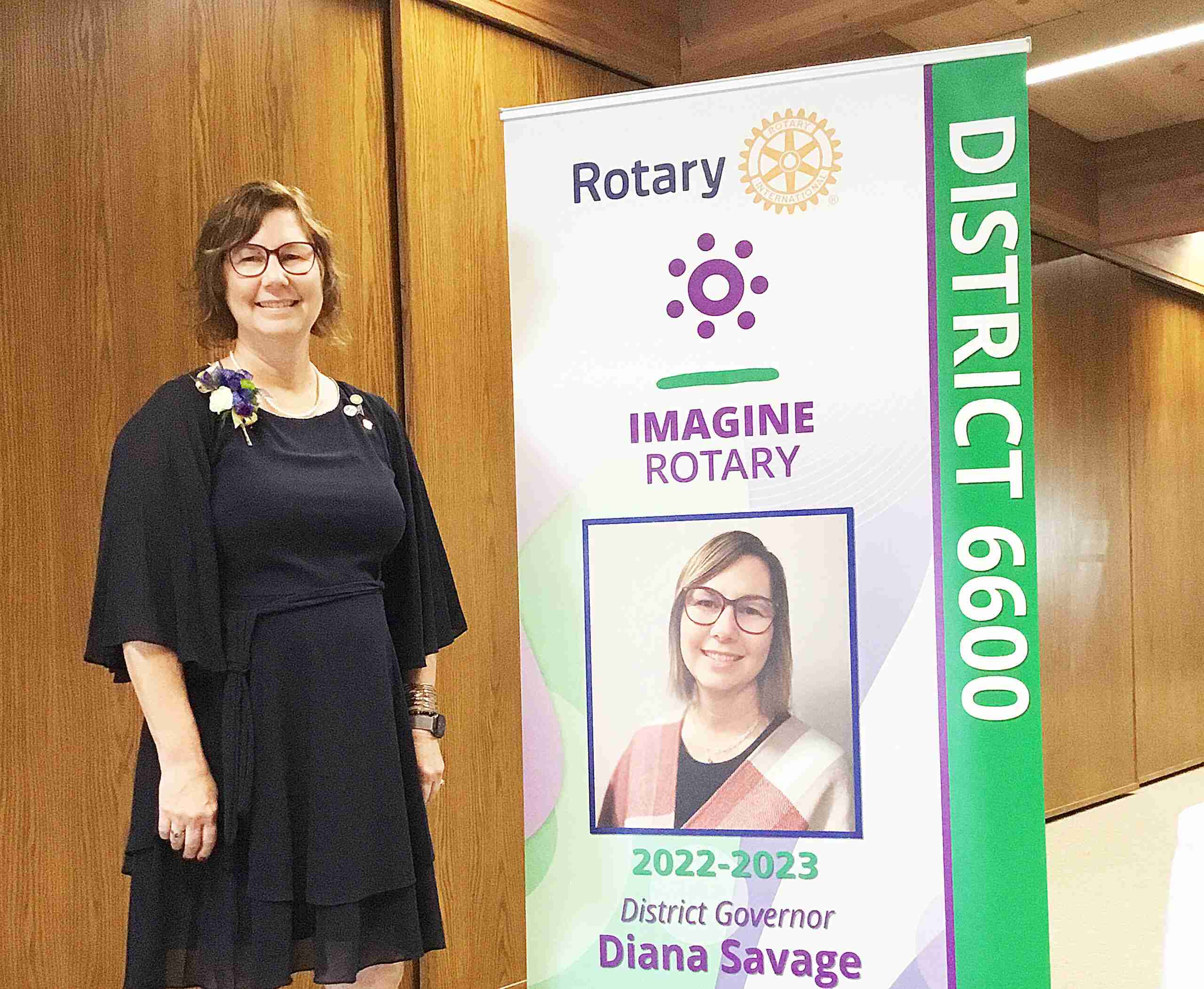 PRESIDENT ELECT … Diana Savage, former Superintendent of Bryan City Schools, posed happily by the sign announcing who was being installed as District 6600 governor for 2022-23. The Installation was held at Founders Hall in Archbold, Ohio on Friday evening, June 24, 2022. (PHOTOS BY REBECCA MILLER, STAFF)

“Rotary is a global network of 1.4 million neighbors, friends, leaders, and problem-solvers who see a world where people unite and take action to create lasting change – across the globe, in our communities, and in ourselves.

For more that 110 years, Rotary’s people of action have used their passion, energy, and intelligence to take action on sustainable projects – from literacy and peace to water and health,” quoting website rotary.org.

Becoming a District Governor in Rotary involves a long process of grooming for many years. Bryan Rotary is part of the 62 clubs that make up District 6600, one of over 500 Rotary Districts throughout the world.

There are over 33,000 rotary clubs in more than 200 countries and geographical areas. Rotary is nonpolitical, nonreligious and open to all cultures, races and creeds.

Diana Savage became a member of the Bryan Rotary in 2009 because as the Bryan Schools Superintendent it was expected of her, she shared in her remarks at her Installation event.

“But that is not why I remained in Rotary, love Rotary, and am now moving into the position of District 6600 District Governor,” she said.

Savage went on to explain that over the years she has come to realize all the good that Rotary does to make the world a better place, adding, “I want my new grandson to grow up in a better place.”

Events and people that helped move her in this direction were mentioned in her talk as she shared from her heart how each one means so much to her.

She shared how she worked hard for six years to be ready to be president of her club. She loved having the opportunity to be the Area 1 Assistant Governor and work with Stryker, Antwerp, Montpelier, Hicksville and Bryan.

She expressed her appreciation for how each one of these clubs welcomed her and made her feel a part of their group. According to a press release, “During her time in Bryan Rotary Club, Diana has served as President in 2017, Annual Auction Chair, foundation Chair and Board member.

She began serving in District 6600 as Assistant District Governor for Area 1 in 2018 and is a member of the prestigious Paul Harris Society through Rotary International.”

The Installation program took place on Friday evening, June 24, 2022 at Founder’s Hall in Archbold. Entering into a pleasant atmosphere with the Bryan City School String Quartet playing beautifully in the background, Rotary members from all across the District arrived for visiting and Cocktail hour. Around 6:50 p.m.

Marie Campbell, Event Coordinator and Past President of Bryan Rotary Club (2017-18), welcomed everyone and said a few opening comments. Past District Governor David Perkins shared an “inspirational moment” and dinner was served.

Everyone enjoyed delicious meals of either roast beef, chicken or salmon served with mashed potatoes and asparagus which followed a green salad and ended with slices of pie. 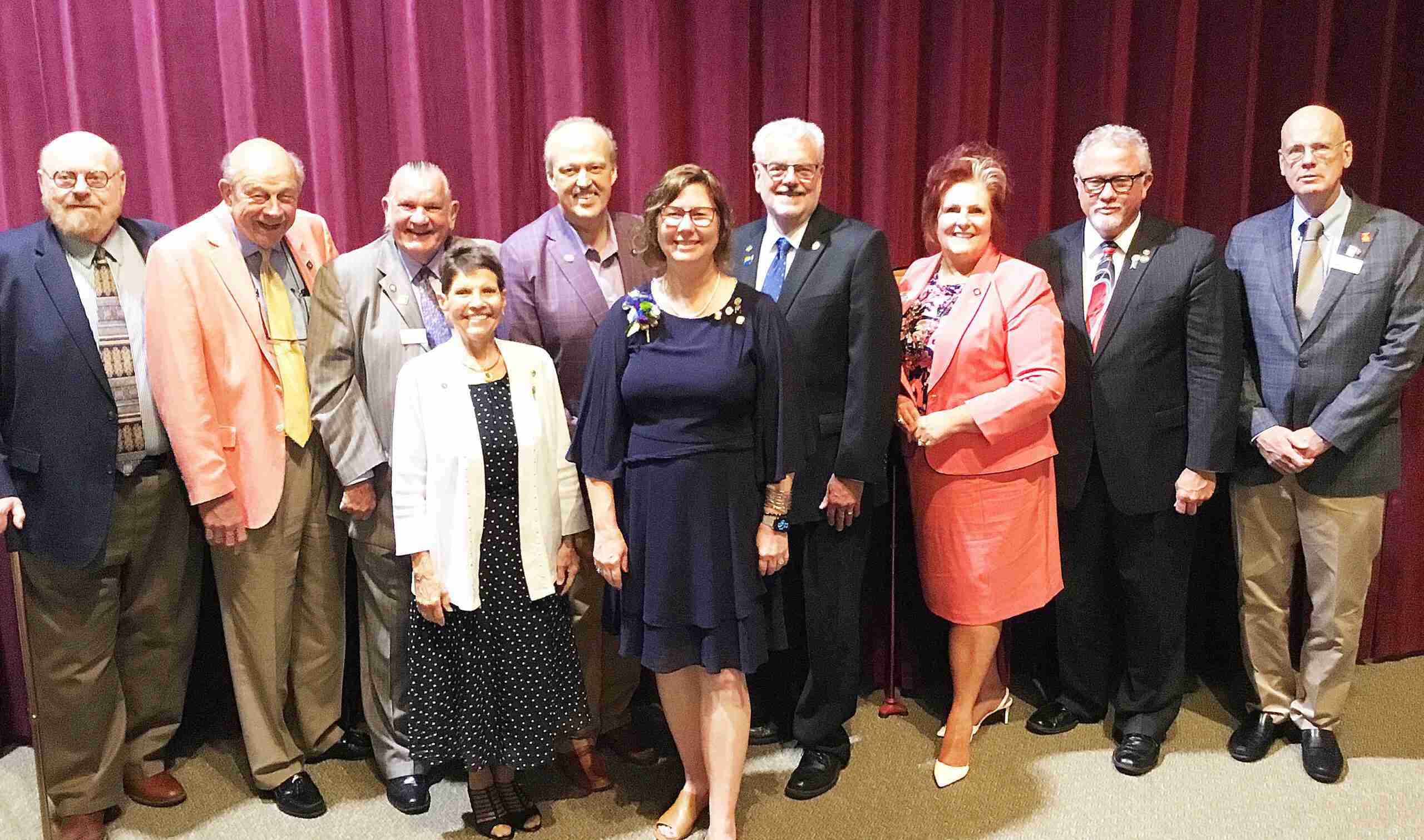 The service was quiet and efficient, kind and pleasant as the Banquet Servers met the needs of those in attendance, refilling ice tea, coffee or water and unobtrusively placing or removing plates.

An unexpected Auction took place with PDG Rex Engle auction off 4 Mudhens ticket to a game the next night (donated by Rotarian Keith Hodkinson). They went for $200 which was put into the District coffers.

Auvdenkampe shared some outgoing remarks, saying how much she has enjoyed her year in this position of service to the district.

Diana introduced DGE Jim Duke and DGN Tim Ryan, pinning their pins on them to mark them for the coming year.

She then read questions concerning their willingness to serve and each one responded I do. “On behalf of the President Elect of Rotary International, Jennifer E. Jones, member of the Rotary Club of Windsor-Roseland, Ontario, Canada, I now declare you the leaders of Rotary for the year 2022-23 in the offices to which you were appointed and I ask all present to rise and acknowledge your support of these individuals,” completed that portion of the ceremony. Jennifer Jones is the first woman to hold the office of International President of Rotary.

At that point, Diana shared her remarks and was welcomed as President Elect with applause. Chief of Staff Beth Schweitzer introduced the Exchange of Flags, explaining that each year this flag stays with the new president and her club, being taken with her to every event she attends.

As Mary Auvdenkampe, District Governor for 2021-22 is a member of the Oberlin Club, President Melanie Satterfield took the flag and presented it to President Elect Beth Pool, of Diana Savages club, Bryan Rotary.

This concluded the installation and celebration of leadership. Diana Savage thanked everyone for coming and welcomed them to stay as there would be a few of hours of music provided by a band, the bar would remain open, and dancing if they desired.

The band was made up of Kevin Maynard on the bass guitar singing leads, Scott Pollick on drums singing harmonies and Paul Beasley on acoustic guitar, also singing leads. They described their style as “multi genre music.”