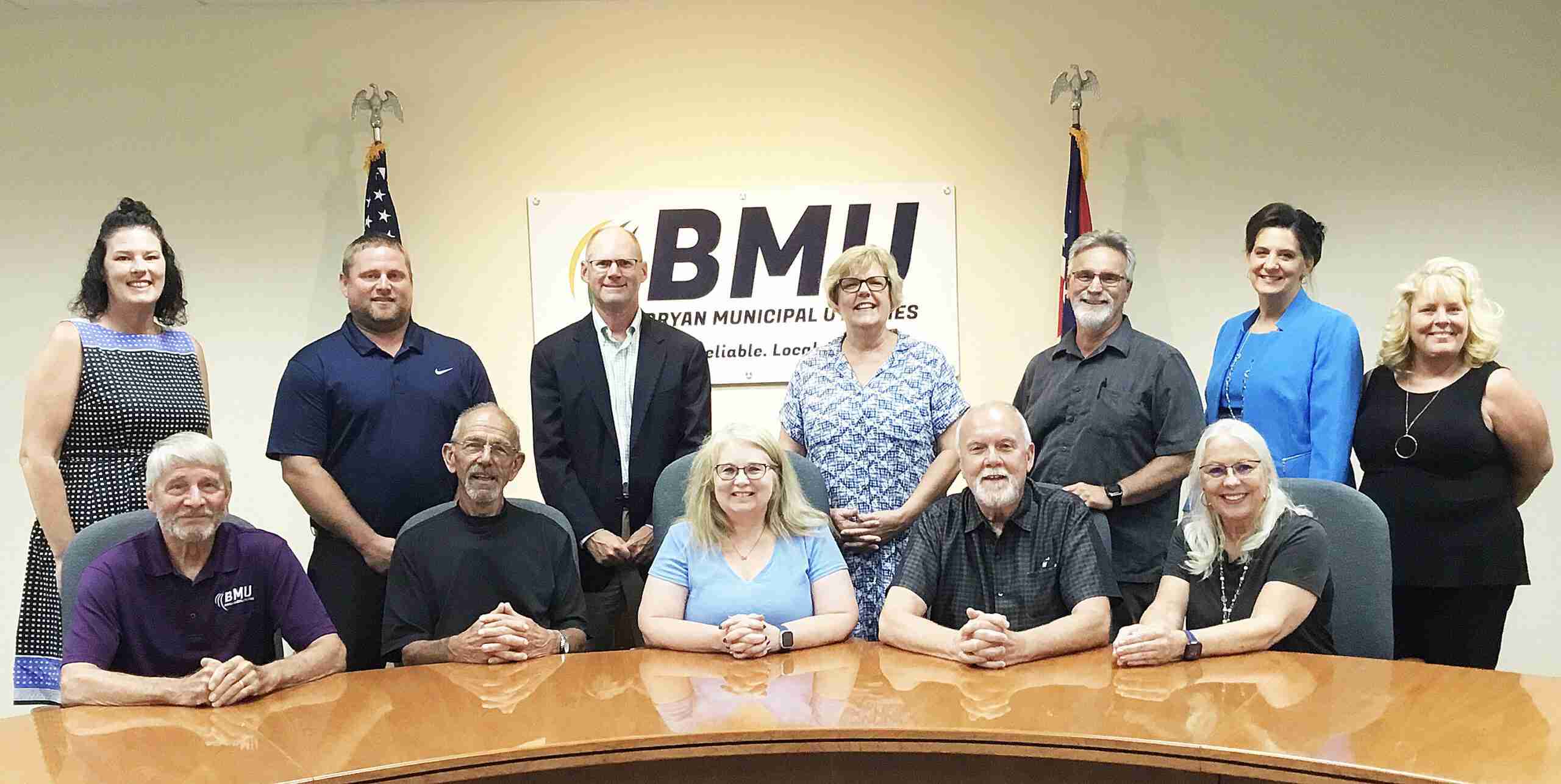 Following the presentation, each of the Board members thanked everyone involved in this project for all they have done to bring it into being, and voted to approve the proposal, via Resolutions 2022-31 and 32, making this a collaboration between Spangler and BPA.

Spangler Candy company has been an active part of the community since it was founded by Arthur Spangler, in 1906.

For 116 years the Spangler Company has been building and promoting community projects for following generations, some financial efforts and some in other types of involvement.

Vashaw gave a short history of Spanglers and an update on present day statistics. The water tower is in the center of the Spangler campus, which covers 40 acres. The buildings cover around 800,000 square feet under roof.

“We have been entertaining the question, besides just holding water, how can we make this tower even a larger asset for the community?”

They were put in touch with international muralist Eric Henn, who has hand painted many water towers, and he has been contracted to paint the Bryan Water Tower.

After much deliberation they determined that giant Dum Dums®, the candy that is probably the best known from Spanglers, should adorn the tower.

There will be eight, approximately 75-foot, Dum Dums®, with two seen from each direction, and with the tower legs painted to represent lollipop sticks.

They have chosen eight of the favorite flavors, including Mystery. The tower will also have the words BRYAN, OHIO painted down the riser pipe on two sides.

The water tower is owned by the city so they will work in conjunction for costs and maintenance. According to a Press Release, “The BPA will cover the costs to prepare and add the base coat of paint for the tower, which is a project the city must do approximately every 15 years.

Spangler has offered to make a $25,000 contribution toward the base coat paint and future maintenance. In addition, Spangler will cover all costs for the painting artist, including labor, expenses and supplies.”

A viewing platform will be provided so that people can watch the process and take selfies. During a larger initiative, in which the community as a whole is working to make Bryan a destination with attractions, they feel this can help with that goal.

Vashaw mentioned the new Spangler store that is being put on the east side of the Bryan Square, saying that together, these two projects will be a draw for the city.

With the amphitheater events, ChristKindl in the winter, the new playground, more restaurants, this can be a piece of giving Bryan more attractions. The plan is for the store to open in 2023, and the tower painting will begin this Fall.

Spangler Director of Corporate Communications, Diana Moore Eschhoffen answered a question from the Board, stating that there is a competition for best water tower and that the artist said this tower will “be in the running for some awards.” “

Bryan Mayor Carrie Schlade who has been in on the deliberations, laughingly said that the choice of Dum Dums® was based on her favorites.

Vashaw clarified that they were chosen by colors that would look good together, with the Mystery Dum Dum® being an absolute.

Schlade stated, “The City of Bryan has been fortunate to have a number of long-term business partners and obviously Spangler, you are one of the top of that list. I want to say that I appreciate you.”

“I appreciate the work that everyone has put in. Derek (Schultz, Operations Manager for the Bryan Municipal Utilities) and Nathan (Gardner, Director of BMU), there was a lot of work put in on your end and your efforts demonstrated that you want to take care of the community more than yourself individually.”

“You have truly helped carry the load and I think it is a fantastic marketing tool for the whole community, not just Spangler, and I very much appreciate your partnership.”

BPA was not seeing this for the first time and was ready with the Resolutions that were needed. They acted on this date in order “to get it done in a timely manner.” Schultz explained the resolutions before the vote.

In the press release, he stated, “We are grateful to Spangler for their financial support of this project. We have been working with them for a long time and we are really pleased about the results – an impressive water tower design that will benefit the community, with no additional cost to the local rate payers.”

The proposal will be shared at the July 18, 2022 Bryan City Council meeting. Mayor Schlade and Councilman John Betts, who was present for the BPA presentation, agreed that they could not foresee any difficulties in council approving the proposal as well.

In other business, the Board also heard a presentation from Craig Kleinhenz, Director of Power Supply Planning with American Municipal Power, Inc. (AMP).

Kleinhenz presentation was a report on the City of Bryan’s Power Supply, explaining how they are doing with all of the economic changes and encouraging them to keep making “Peak Shaving” a priority, as it saves money for individual rate payers.

Resolution 33 “Authorizing Change order #1 for the Power Plant Substation Phase 1 Major Equipment” was approved along with an Employment Status Change Request to move Stuart Martin from Probationary to Engineering Assistant III. BPA also approved the minutes of June 21, 2022 and the payment of the bills.