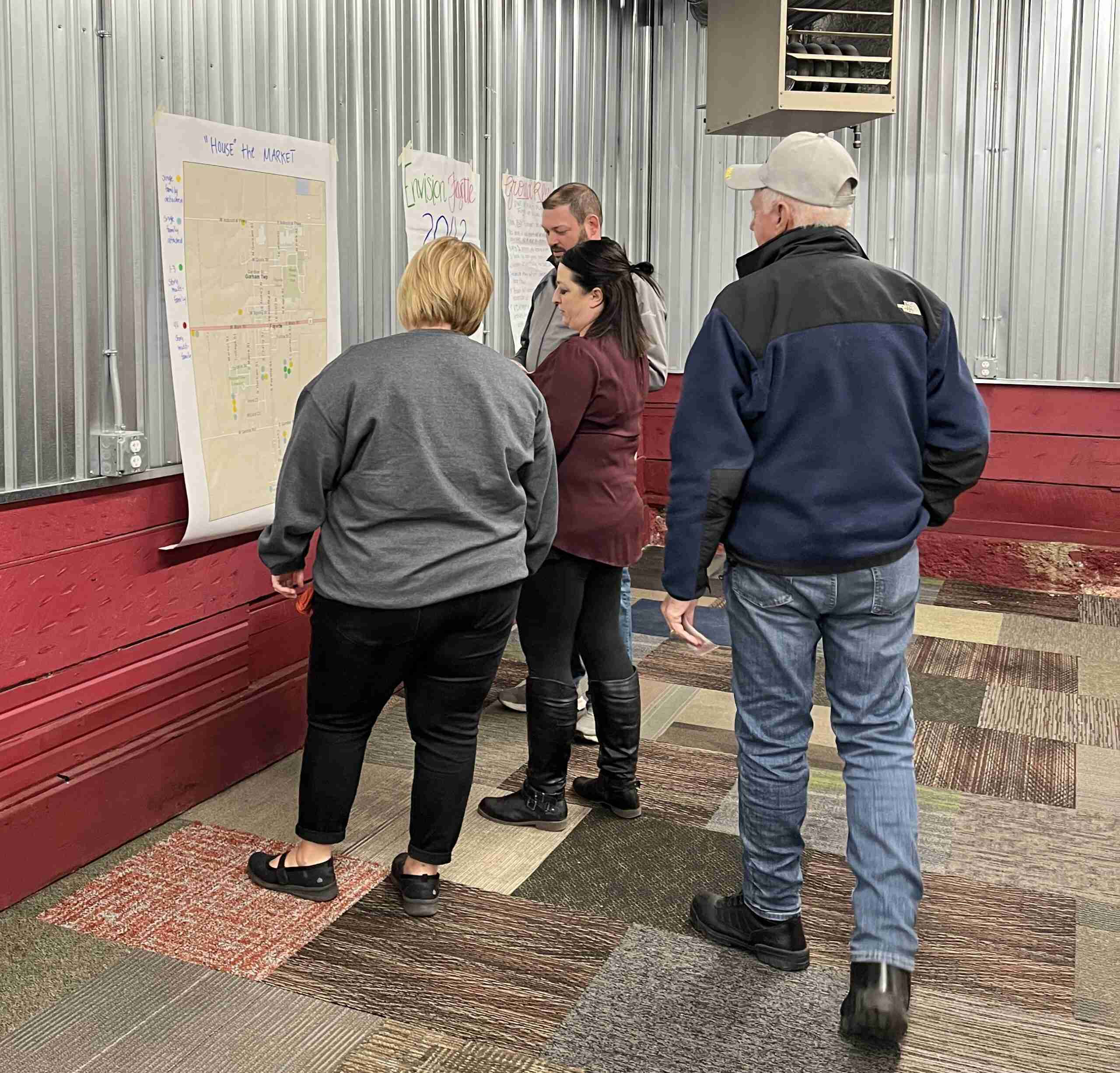 ENVISION FAYETTE ACTIVITY…During the workshop held on January 18, 2022, those gathered were broken into small groups to participate in three different activities.  This one was a map on which they determined where it would be good to have a housing development in Fayette. (PHOTO PROVIDED)

On Tuesday evening, January 18, 2022, a workshop entitled “Envision Fayette” was held for anyone interested in the growth of the community of Fayette, Ohio.

The workshop was led by Fayette Village Administrator, Genna Biddix, and long-time encourager of growth, Roberta Streiffert. (A correction to the perspective given in a previous article… “Envision Fayette” is not a group. It was a single workshop put together for the purpose of finding out the hopes and dreams of community members.)

Roberta Streiffert is an active member of RCAP, Rural Communities Assistance Program, and this gathering was part of the Entrepreneurial Communities Initiative.

Streiffert works for GLCAP, Great Lakes Community Action Partnership, of which RCAP is a branch.

She has worked with Fayette over the past 20 years and this meeting that was held was to reinitiate the RCDI (Rural Community Development Initiative), starting to look at the next round of economic development help.  They help the community re-envision what the residents want to do in their community.

RCAP has funding through USDA that is available to them to select a number of communities to participate.

They are a state wide organization and the last time they had funding for the RCDI program, there were nine communities that were chosen.

Biddix said she is not sure how many are involved this time, but it is a small number from the entire state of Ohio, usually for water and waste water help.

For the Envision Fayette workshop, there were 21 community members present at The Stable where it was held. The participants spent two hours involved in three different activities.

One was an Individual Brainstorming Activity. The second had them putting stickers on a map of the village to show places that might be a good place for a Housing Development.

The third and last activity had them break into smaller groups and, using a Visioning Canvas, they wrote a vision statement, identified values which they want Fayette to have or keep, wrote about strategies that could be used, any challenges, and the perceived outcome in a 20 year Look Ahead.

Biddix said that she felt it was a successful time. “It appeared that people were happy and positive for what RCAP is trying to help the community to do, as they were leaving,” she said.

Streiffert and Biddix will get together and determine the next steps to be taken with RCAP, to see how Fayette can benefit from this initiative.