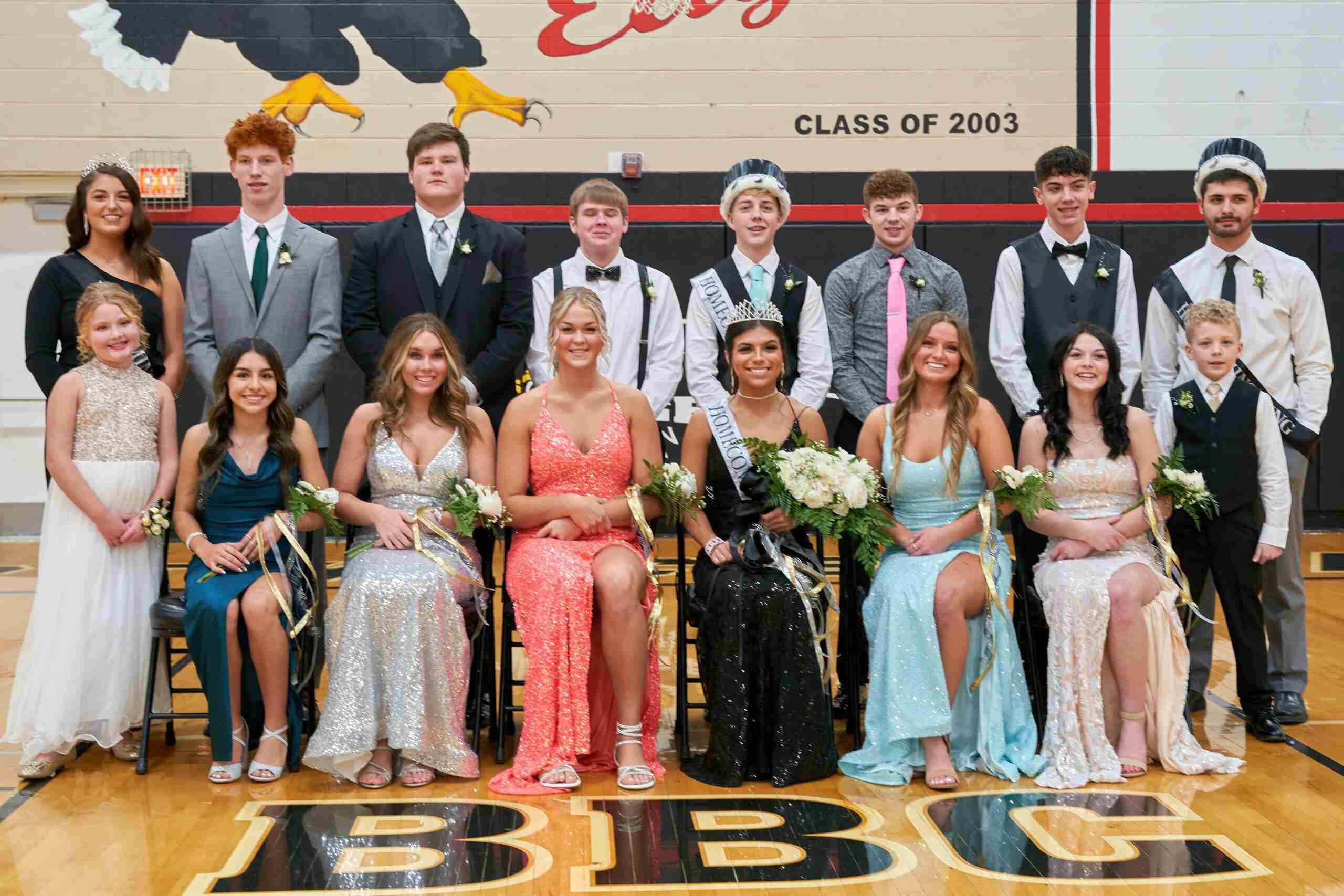 The North Central High School Student Council welcomed everyone present for the Basketball Game against Delta on January 29, 2022, to Homecoming 2021-2022!

They began the night by thanking the students, staff, and administration for helping make this past week and this evening a huge success! Thanks also to Visions Photography by Lori Moore for taking the Homecoming pictures, and Jess Tracey and her Floral Design class for the beautiful flowers.

Trenitie is the daughter of Travis and Tasha Sherry. Her siblings are Kylar, Brayden a Junior, Taylor a sophomore, Devan an 8th grader, Cooper 3rd grade and Parker who is in 5th grade. Trenitie plays softball and loves animals. Trenitie’s plan after high school is to become a veterinarian.

Talen is the son of Tony and Courtney Denstedt. He has a younger sister Caylee that is in 5th grade. Talen plays basketball, track and is on Student Council. He is currently employed at JJ Winn’s restaurant. After high school Talen plans to go to a trade school to become a technician.

Mireya is the daughter of Manuel and Pamela Cruz. She has an older brother Manny, a younger brother Miguel who is a 3rd grader and a sister Martha that is in 6th grade. Mireya plays basketball and track. She is also in Spanish club, SOAR and FFA.  After high school, Mireya is thinking of going to college, but has not determined in what she will major.

Cohen is the son of Craig and Anna Meyers. He has a sister, Cailyn who is an eighth grader and an older brother Alex. Cohen plays baseball, basketball and football. After graduating, Cohen would also like to attend college but is undecided at this time in what he will major.

Macie is the daughter of Michael and Andrea Ryan. She has a younger brother Knox who is in preschool. Macie plays volleyball, softball, and track. She is also involved in SOAR, Spanish club, and Student Council. Macie is undecided as of now for her future plans. She wished the basketball team good luck.

Levi is the son of Paul and Carla Houser. He has one older brother Dylan.  Levi plays football and is involved with OARS. In Levi’s spare time you will find him working at JJ Winn’s restaurant. After graduating, Levi would like to go to college and get a degree in engineering.

Senior Queen and King candidates. First up were Alexia Miller and Sam Wheeler.

Alexia is the daughter of Jeremy and Anastasia Miller. She has two older brothers Jeremy and Andrew. Alexia is involved in SADD, Student Council, Spanish club, National Honor Society, indoor/outdoor track, volleyball and cheerleading. After graduation, she will be attending Bowling Green State University majoring in Business Analytics and Intelligence.

Sam is the son of Norm and Sally Wheeler. He has one older brother Nate. Sam is involved with FFA, baseball, and OARS. In his spare time Sam also works at RNK Construction. After graduation, Sam will be attending The University of Cincinnati to major in Cyber Security.

Next up were Erin Elser and Mason Sanford.

Erin is the daughter of Mike and Jackie Elser.  She has an older sister Addie. Erin plays volleyball, and is involved in Student Council, SOAR, Spanish club, SADD, National Honor Society and is president of the senior class.  She will pursue a degree in Pre-Physical Therapy from Grand Valley State University.

Mason is the son of Melissa and Austin Rummel and Ryan and Jerrica Sanford. He has four younger siblings Jayse (who is our crown bearer for this evening), Amaya, Laynee, and Rylan. Mason plays basketball, golf and is involved in Student Council and Spanish club. After graduation, Mason wants to major in Physical Therapy, but has not chosen which college he will be attending.

The final candidates for Queen and King were Kendal Bonney and Colton Hicks.

Kendal is the daughter of Dan and Shawne Bonney. She has one older sister Madyson. Kendal is involved with Student Council, SADD, SOAR, Spanish club, National Honor Society, and is a teacher’s aide and treasurer of her class. She also plays volleyball and basketball. After graduation, Kendal will be attending Ashland University majoring in Special Education along with playing Volleyball for The Ashland Eagles.

Colton is the son of Joshua and Stacey Hicks. He has an older sister Brittany and a younger brother Johnny who is a sophomore. Colton plays basketball, baseball, and golf and is in National Honor Society. After graduation, Colton wants to major in Premed and Radiology but has not decided on which college he will attend as of now.

The Flower girl for Homecoming was Remi Lawson and Crown Bearer, Jayse Rummel.

Remi is the daughter of Jimmy and Danielle Lawson. She has two older sisters, Mia who is in 6th grade and Brianna a junior. Remi is a second grader in Mrs. Kizer’s class and her favorite subject is Math. Some of Remis favorite things to do are color, hang out and play with friends, go swimming, travel and taking care of animals.  When Remi grows up, she wants to put her love for animals to use and be an animal rescuer.

Jayse is the son of Austin and Melissa Rummel. He has an older brother Mason that is a senior and also on Homecoming court and a younger sister Amaya. Jayse is also a second grader in Mrs. Kiser’s class. Jayse enjoys playing basketball, riding his dirt bike, and swimming. His favorite subject is Reading. When Jayse grows up, he wants to be a professional basketball player in the NBA like Kobe Bryant.

The reigning Homecoming Queen and King were Makayla Meyers and Kaiden Russell.

Makayla is attending Northwest State Community College to receive an RN nursing degree. She is also employed at Bryan Healthcare and Rehab Center.  Kaiden is attending The University of Northwestern Ohio and is majoring in Business Agriculture. Kaiden is also playing baseball in college and loving it!

The 2021-2022 Homecoming Queen and King crowned that night were Alexia Miller and Mason Sanford.