Conner Varner Of Stryker: A Threefold Cord That Is Not Quickly Broken 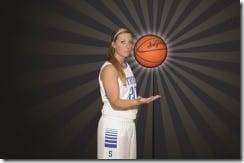 Suffice it to say, I have a ‘working familiarity’ with the Varner sisters of Stryker.

First came Tayler, and her career as a Lady Panther. Second was Torey, not as tall as her older sister, but one whose ferocity on the court always had her matched up defending the best player of the opposition. Before I began taking pictures of Torey, I met her younger sister. At that time, Conner Varner was a short, pudgy junior high kid that watched her older siblings from the sidelines.

That was then…this is now.

Tayler and Torey have both graduated and are now denizens of The Ohio State University. As for their kid sister, Conner, she has gone on to accomplish things in a Stryker Lady Panthers’ uniform that neither of her older sisters could do. That short, pudgy junior high kid has pushed herself hard, and with natural teenage growth along for the ride, Conner Varner has become one of the most well-recognized and well-respected girls’ hoops players in the area. Her drive, determination and diligence to a work ethic that is second to none has turned the pudgy kid into the latest Stryker Lady Panther record a 1,000 point career…and that career is far from over.

Conner spent her first two years playing alongside the likes of her sister Torey, Baily Grime, and the legendary Brooke Ruffer. Although some may consider the term ‘legendary’ a bit of a stretch, it fits well as Ruffer was not just the last Lady Panther to break the 1,000-point barrier, she went on to break the all-time Lady Panther scoring record, and then followed that up by breaking the boys’ record as well, making her the all-time leading scorer in everything in the history of Stryker High School. This lineup, like the prior lineups that featured names like Boetz, Hancock, Myers and Laws, proved to be a terror to the BBC, and were frequent net cutters during the postseason. When Conner Varner stepped onto the floor for the first time as a freshman though, she fit in like she had been there all along. Those teams that focused on stopping Ruffer and Grime quickly found that Stryker was not rebuilding…with Conner Varner lacing ’em up, they were reloading. Rookie jitters, if any existed, were nigh-on impossible to find. She was every bit the threat that her superiors were, and many an opposing team discovered the fact the hard way.

Was she playing in the shadows of the upperclassmen? “I don’t think so,” she said. With defenses doubling up on Ruffer, Conner would frequently get open for scoring opportunities upon which she was quick to capitalize. “Being behind her has taught me a lot…to look up to her, and using the same stuff that she has to have success too.”

Although their college schedules precluded Tayler and Torey from attending the December 13 game against Fayette in which Conner broke the 1,000-point barrier. That milestone, she said, was, “…the result of all the hard work I put in. It wasn’t a goal of mine; it just happened by the way I play…and the team’s been there for me. It’s a big deal, but it’s not something that I brag about or tell a bunch of people about. It’s just about the hard work I’ve put in. My teammates have had a big part of me getting to where I am. I thank them for everything that they’ve done for me, because I couldn’t be where I am without my former and current teammates and coaches.”

Growing up watching one of the preeminent girls’ high school programs in this part of the state, Conner knows Lady Panthers’ history, as well as her place in it. “There’s definitely other people that I’ve looked up to since I was a little girl. The Boetz girls, the Myers girls, and knowing that you have to live up to…the Stryker Lady Panther legacy. I knew that I had to get in the gym in the summer, come in the morning, and put in a lot of hard work to not let down the older girls who’ve been here, and the great coaching staff that we have.” She considers the coaches, Head Coach Steve Brown, and assistants Brett Greiser and Ed Ruffer, her heroes. “I see them more than I see anybody else during basketball season. I’ve been able to grow close to them since my freshman year. They’re pretty much family.”

“I’ve been very fortunate, and this program’s been very fortunate with the players that we’ve had,” said Coach Brown. “Conner is a great example of what hard work and dedication can do for you. I think that she is a true example of wanting to be a basketball player. She’s not the fastest player on the floor, but she’s probably the most determined. In the gym, in the preseason and in the summer…that’s where her time has been made. She’s just so determined to be good, and her team is very important to her. Her team goals are very high, and she knows that she has to have success to do that.”

“She’s in the gym every morning,” Coach Brown continued. “She stays after practice and gives everything that she’s got all the time. She started the season off with a severe ankle injury, and we about had to put chains on her to keep her out of practice and scrimmages. I’m not sure how many kids would still be practicing and doing those things early on. She puts in extra time on conditioning. We would have a hard practice, and she would be out running in the hall afterward. It’s just the type of kid she is. She’s a great kid and a great competitor, and extremely determined.”

What advice does Conner have for the short, pudgy junior high girls that want to follow in her footsteps? “Put the time in, and believe in yourself,” she said. “You can keep working past that. Keep working hard on things, and you’ll get past that stage and be able to become a better basketball player.”

Conner is not just another pretty face that can wreck a defensive scheme on the court. She also knows her way around a classroom or two. This 1,000-point scorer is also scoring a 4.0 GPA, and is a common sight on the BBC Scholar Athlete list. Although she has the skills to win on the court and the intellect to win in the classroom, there is a third element to the success of Conner Varner…a life and character element that binds everything together. Conner is a Lady Panther of great faith…and she is not hesitant to display that faith.

“It’s important to me,” she said of her Christian faith. “In bad times or bad days that I have, it’s something that’s always constant; it’s always there. It’s something to be able to lean on. A big part of where I am today is through the abilities that God has given me, and the ability for me to make relationships with my teammates and other people through Him.”

Solomon wrote in Ecclesiastes 4:12 that, “…a threefold cord is not quickly broken.” There have been many who have eclipsed the 1,000-point mark. There are a few of them who also excelled scholastically. Doing both with a 4.0 GPA is a rarity, but even more special is finding someone who can do all of that, while openly binding everything together with a faith in God. Academic excellence, athletic excellence and faith are the hallmarks that best describe Conner Varner, ‘… a threefold cord that is not quickly broken’.