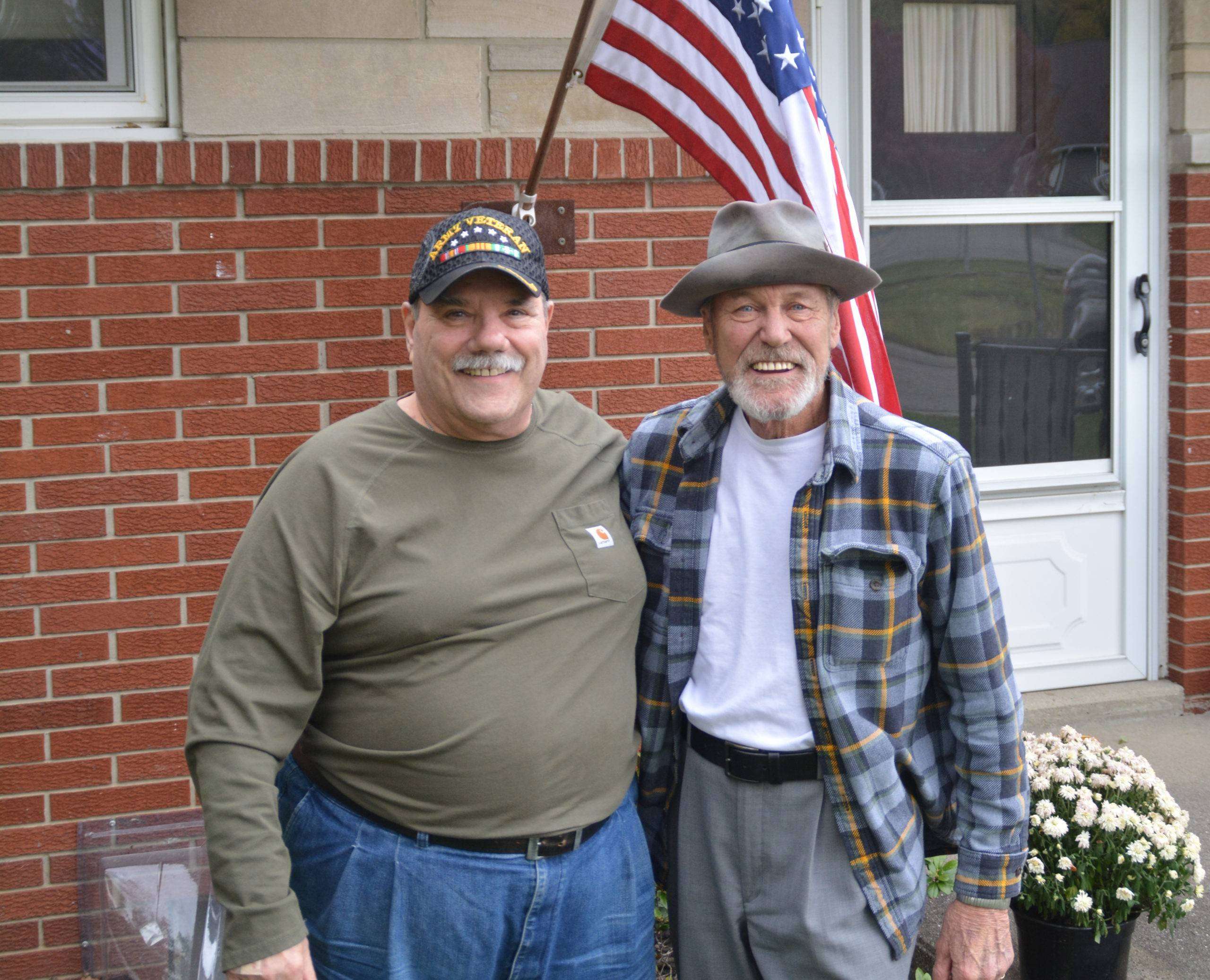 COUSINS, FRIENDS … Chuck Mignin Jr., and Lenny Miller Jr., both 69, pose in front of Lenny’s house in Archbold. The men are cousins and have been friends their whole lives. They now volunteer through the American Legion.

Chuck and Lenny have many things in common in their lives. They share a grandmother, they graduated together from Archbold High School in 1967 and both served in Vietnam at the same time.

While their paths didn’t always fall in lockstep, they are still close and are enjoying retirement in their hometown. Chuck Mignin Jr., and Lenny Miller Jr., were born within a month of each other in 1949.

Their moms were sisters (Dominics). They have known each other since birth and the bond is strong. Whereas Chuck was drafted in 1969, Lenny enlisted in a program through the Marine Corps on an aviation guarantee on a four-year hitch and entered the service in January 1968.

“He goes in a year after me, and gets out a year before me,” Lenny says laughing with a broad smile. Chuck remembers coming home on a Christmas Eve and he also recalls being greeted in Chicago with cries of “baby killers” and being spat upon.

He had spent a year in “The Nam,” and that’s why they gave him the early out. Lenny did not serve on land, 2nd Battalion, 9th Marines, 3rd Marine Division. This was in 1970 after President Richard M. Nixon has begun his de-escalation of forces in the region. His vessel had a battalion of Marines, a squadron of helicopters and “enough sailors to float that ship.”

They would go out on 30-day missions before coming back to port to restock and refuel. “We were based out of Camp Schwab, Okinawa,” Lenny said. “We were in the South China Sea for six months.”

The battalion’s motto was “Hell in a Helmet.” A year earlier the battalion was nearly wiped out in the Tet Offensive. That fact made an impression on Chuck. Lenny’s homecoming was different from a lot of veterans.

“No confrontation, no animosity,” Lenny said. “When I came home I don’t remember one incident that was negative.” In 1972 he attended Findlay College wearing his olive drab field jacket and his olive drab haversack which he used for a book bag “and no one gave me a hard time.”

He transferred to Toledo the next year did not have a single negative incident. “You’re lucky,” Chuck interjected. Lenny Majored in human relations and law enforcement and became a park ranger/park manager as part of his duties with the Ohio Department of Natural Resources for 25 years.

Chuck was in country as part of the Americal Division, as the 23rd Infantry Division, was more commonly known as. He served as a Combat Engineer which means he had to go out and locate underground mines and destroy them.

Often his job was to extract soldiers who had stumbled into a minefield. Chuck made a point to note the divisional patch which is four white stars on a blue field that resembles a cross.

This played an important factor in how certain troops were treated when they came home. Lt. Calley, who was responsible for the My Lai massacre was also part of the division. When word of the massacre began to circulate about a year after the incident, protesters learned about the patch and would target the returning soldiers with their epithets.

When Chuck came home he flew first into California and then into St. Louis, at those two stops there were no problems. Then he made his final landing in Chicago. “Chicago was the worst.” Chuck said. “We were spit on. We were cussed at (at the airport).”

This was in 1970. “They called us baby-killers.” When he got back to Archbold he got married and had six kids. He became a construction worker. Initially he had some nightmares, but had to push all that to the back of his mind because he had a family to feed.

“I had nightmares, I had everything for the first three to five years,” Chuck said. When he was 62 the nightmares returned and he began to slow down at work.

He got registered with the VA and found a litany of medical problems including PTSD, heart problems and diabetes. He took an early out for his retirement.

While the transition was sudden for Chuck, Lenny spent a year in Washington D.C. serving in a special unit filled with Marines who had served in Vietnam. Their job was to march in special shows for civilians that included the Marine Corps Band, the Silent Drill team and other units.

This served as a decompression chamber for Lenny and made his transition smoother. “When I got out I had no problem readjusting,” Lenny said. “I played for football for Findlay and the University of Toledo.” Chuck is still happy to be home.

“There is no better place than the United States,” Chuck said. Now the pair is active in the Archbold American Legion Post BLW 311. The service club is an organization founded originally by veterans of the First World War.

Be the first to comment on "Cousins Chuck Mignin Jr. & Lenny Miller Jr. Now Serve The American Legion Together"