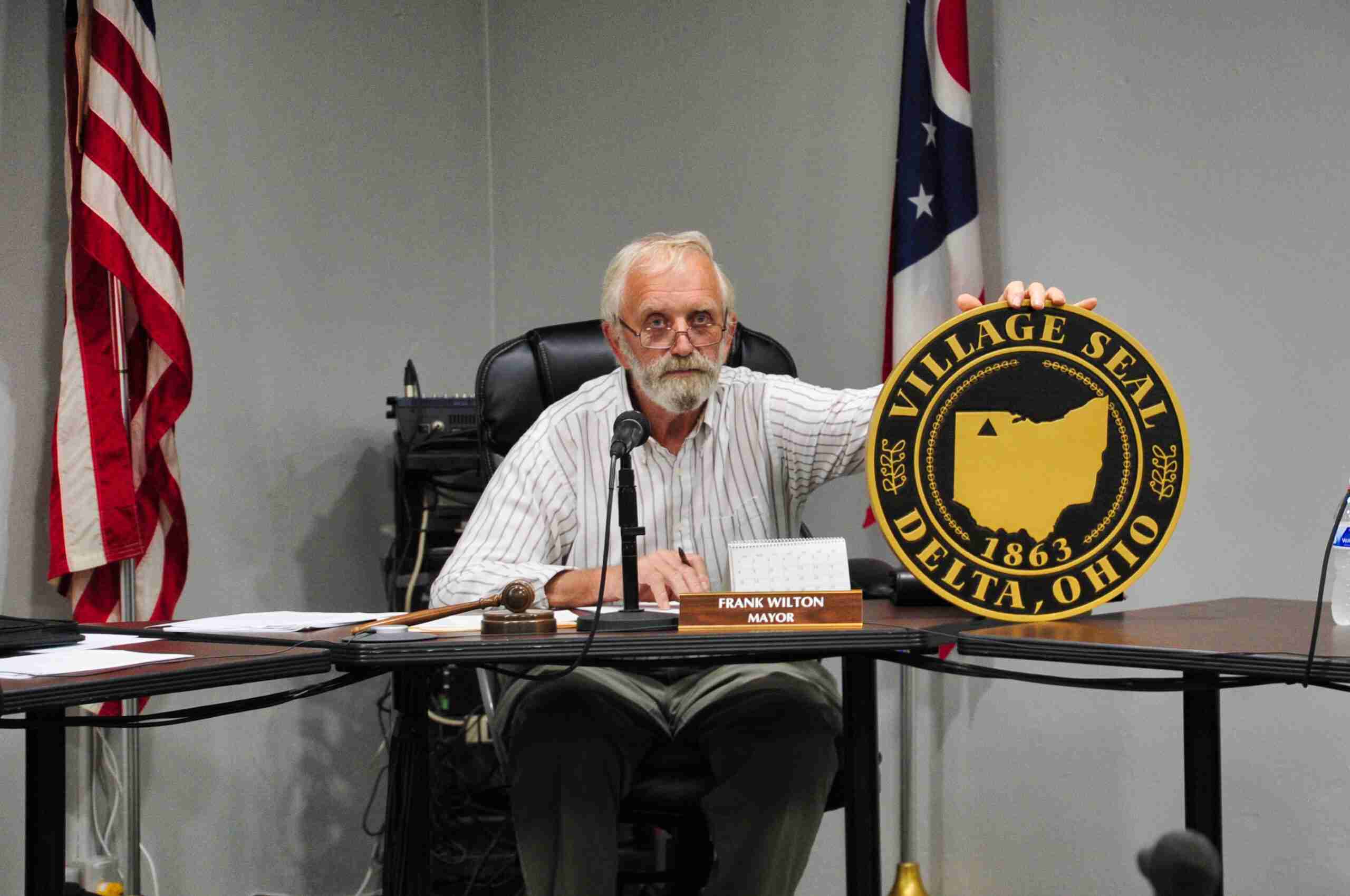 NEW SEAL … Mayor Frank Wilton holds up the new Seal of Delta to show the council members and others who are present. (PHOTO BY JACOB KESSLER, STAFF)

The Village of Delta held their meeting on Monday August 16th. The meeting was called to order at 5:30 p.m. followed by roll call and the Pledge of Allegiance.

A motion was then made to approve the minutes for the previous meeting, which passed. With no members of the public present to speak, council moved on to communications.

The Village Administrator Brad Peebles stated that he has received correspondence from the ODNR regarding the inundation study and that they are now requiring one to be done for the lower reservoir.

The Village will be challenging this as no records exist with the village of this ever being done before. Council Member Lynn Frank asked what this would do to the timeline, to which Mr. Peebles said he was not sure as he just received it this morning.

Moving on to the Administrator’s report, Mr. Peebles voiced a request for changes to be made to Village Office parking. The Offices used to have parking spots outside to the front of the building.

With the new paving being done, ODOT asked if they would like them remarked out. Citing safety concerns, Mr. Peebles suggested getting rid of those 5 parking spaces and replace them with 3 on the west side of the building.

There would also be “no parking” signs put in front of the offices as well. With no objections from council members, Mr. Peebles stated that he would put together legislation for them to review for the next meeting.

Mr. Peebles continued on to speak about the previously discussed issue with the Mewborn property and the flooding on their land.

A response was received from Mr. Marks, but a response has not yet been received from his attorney. At this time, Mr. Marks is still in belief that he is not responsible for the drainage issue.

There was also a contention put fourth that some people have added dirt to the area that has also affected drainage. Mr. Peebles stated that while he understands his contention, the dirt was placed there because of the flooding in the first place. The conversation will remain ongoing with Mr. Marks and his attorney.

Mr. Peebles then explained that the Village received a letter regarding an underground storage tank. This tank is a 500-gallon tank for diesel fuel storage, and it was subject to inspection in late June.

It did not have record of overflow devices or spill monitoring. Dayton Testing came out and ran tests which failed. Quotes are now being gathered to remove the tank and replace it with an above ground storage tank.

A discussion then took place regarding the next meeting. A request was made to meet on August 30th and then on September 13th in order to make sure meetings are not spread out that long.

A motion was made to meet on August 30th at 5:30 p.m. which passed. A motion was then made to pay the invoices which also passed.

With nothing to report from the Law Director or the Police Chief, council moved on to hear issues from fellow council members.

Council Member Anthony Dawson asked the rest of the council whether they should have a mask requirement for the offices.

Mr. Dawson stated that with all the COVID stuff starting up more, he would rather be safe than sorry and asked what everyone’s thoughts were regarding everyone wearing a mask that entered the building.

A discussion followed with it being said that staff already wear a mask during the day and that the plastic shields could go back up instead of masks. It was also stated that all the staff in the building were vaccinated.

A consensus was reached to put the plastic shields back up and look at the issue of masks later if needed.

Council then moved on to old business and heard the third reading for Resolution 21-11 in regard to authorizing the Village Administrator to enter into an agreement with DGL consulting engineers to survey and design a downtown entrance feature of West Main Street. A motion was made for this resolution which passed.

Moving to New Business, council held a first reading for Resolution 21-13. This resolution is in regard to the establishment of a new fund. The fund is number 991 and is a Fire Trust Fund. A motion was made to approve and passed.

Resolution 21-14 followed after regarding authorization for the Village Administrator to submit grant applications for water and wastewater grant funds administered by State of Ohio, Department of Development. A motion was made to approve and passed.

Lastly was Resolution 21-15 to give authorization to the Village Administrator to enter into agreement with Peterman & Associates for a preliminary layout, evaluation of existing facilities, and cost estimates for the replacement of the public pool within Delta Community Park. A motion was made to approve which passed.

Mayor Frank Wilton then presented the council with the new seal for the Village. The older seal was replaced and had words removed to make it look more simple.

The seal will be hung on the wall, behind the mayor and in-between the flags. It was again stated that a meeting will be held on August 30th.

A motion was then made to adjourn which passed at 6:12 p.m.