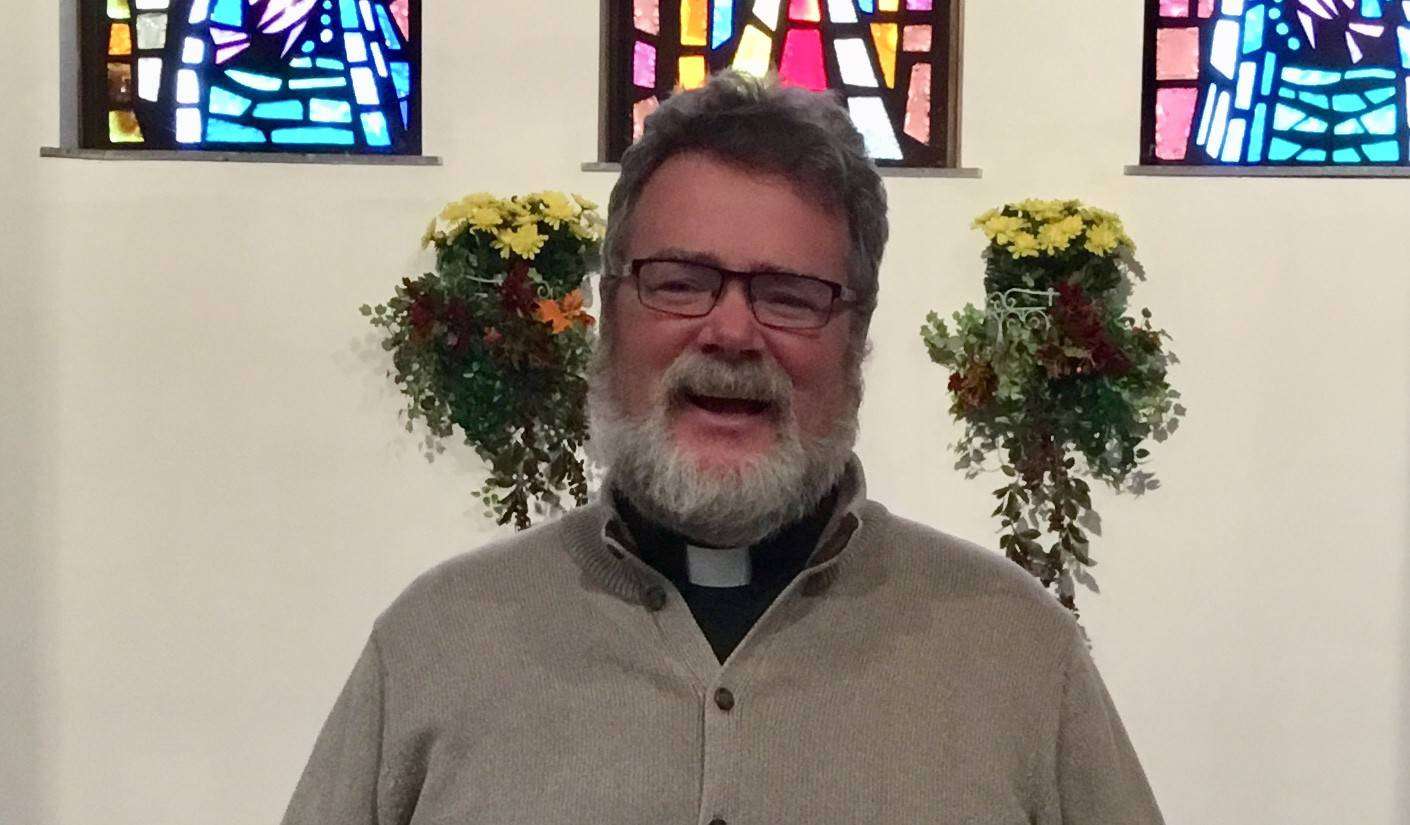 TRINITY LUTHERAN PASTOR … Matt Voyer, who hails from the state of Maine, is excited and happy to have been called to pastor this church in Delta, Ohio.

Trinity Lutheran Church on Taylor Street in Delta, Ohio, has some very happy members this month as after two years with no pastor, they have welcomed Matt Voyer, his wife Heather and 12 year old son, Toby, to the area. Pastor Matt enjoyed his first Sunday in his new post on October 13, 2019, but the church held his official installation service on Tuesday, November 5th and followed it with a Potluck meal.

“The Installation Service was very exciting for me,” Voyer shared in an interview. “There were twenty visiting vested clergy there from the Maumee Valley Conference and from Toledo, and Whitehouse. Also, my wife and son got to read the scripture for the service and that was so special.”

Born in Portland, Maine, in 1975, the third of six children, to Clement and Loretta (Rand) Voyer, Pastor Matt still carries his New England accent. His parents were both from Portland, and it was a dream of his mom to someday live on Peak’s Island, which could be seen out in Casco Bay from her childhood home.

Soon after they got married in 1970, his parents moved to Peak’s Island and Matt and his siblings grew up playing all over the island, which had a year round population of about seven hundred. “It doubled in the summer,” Matt says, “which is common for most of the islands off the coast of Maine.”

He attended school on the island until sixth grade, when the students took the ferry to Portland where they were picked up by the bus and taken to the big school there. Matt said that there was a large population, of which he was part, of Irish and French Canadian background. He graduated in 1993, from Portland High School, which is one of the oldest active High Schools in the country.

Voyer was raised in the Catholic Church, and as a child he thought about someday becoming a priest, but at the age of 21 he got hired to work at a Before and After School program at a Lutheran church, which began a change in his beliefs. “When I discovered Lutheranism and this emphasis on justification by grace through faith, it was a life changing experience,” Pastor Voyer said. “I like to tell people that my Lutheran training began when I was 21.”

“There have been various times throughout my life when I really felt close to Christ, especially in a specific conversation with my mother when she was dying of cancer. Sadly, the same experience that drew me close to God pushed my siblings away and half of them are now atheists.”

His work with children, ever since that program, has been a major part of his life. He became a member of the Lutheran Church a year later and one afternoon, the director of the program asked if he had ever thought about ministry. When he rediscovered his call to ministry and decided to become a Lutheran minister his parents were supportive. “My mother was very proud. My childhood priest was also very affirming of my call to enter Lutheran ministry…and my aunt who was a nun was also very supportive.”

The decision to attend seminary at Lutheran School of Theology in Chicago was a great choice because he met his wife Heather, who had grown up in the suburbs of Chicago, in Greek Class. They were married in 2004, a year before he started his internship in Dayton, Iowa, which is a really small town.

“I fell in love with small town and rural ministry at that point,” Pastor Matt said, “so I finished at Wartburg Theological Seminary in Dubuque, Iowa. While there I was the research assistant for the Director of the Center for Theology and Land, which is the rural ministry office.”

Following his graduation and ordination in 2008, they moved about five miles south of Minnesota in Iowa and pastored two small churches. His next call was to be associate pastor in Stroudsburg, Pennsylvania. The third call was in Lawrenceburg, Indiana, where he pastored for six years, getting quite involved in the community as well.

“I was the Vice President of the Drug Coalition while there. Through the years, I have been on boards of Pregnancy Centers, worked with food pantries and gotten involved in other ways, as I believe involvement in the community is a key to the life of the church…and the community,” Pastor Matt said.

He has ended up in Ohio now because he opened himself up for the call and the Northwest Ohio Synod saw his paperwork and called him for an interview. On the last Sunday in August of this year, the Trinity congregation voted to call him to be there pastor.

Voyer says he is looking forward to a long relationship with this congregation as the previously called pastor was there for seventeen years. He will be offering an adult Bible Study on Thursdays at 10 a.m. and 7 p.m. on Acts of the Apostles. They are also planning to go back to having two services, starting in December.

“I am excited about being in a town church, as the ministry is vastly different. The people have been so good to us and we are looking forward to getting to know everyone,” he said. He has already attended his first meeting of the Delta Ministerial Association and was blessed by the pastoral fellowship, commenting that many in the group are newly called to this area. He is also a member of the Society of the Holy Trinity, a Lutheran Ministerial Association.

“The church is liturgical and has around eighty in attendance on Sunday mornings. The focus is on the Sacraments and The Word, with a lot of emphasis on grace and forgiveness,” Voyer explained, adding, “The Lutheran reformers said that the doctrine of justification is the doctrine on which the church stands or falls, and that is my strong belief and preaching.”

“When I converted from Catholicism I found that the Lutheran church is the closest to what I believe and I moved into it smoothly. Many are leaning toward more evangelical thinking, but I feel the Sacraments need to be the center of a Lutheran christian’s life… Obviously Jesus is the center, but the Sacraments are central to the faith of Lutherans.”