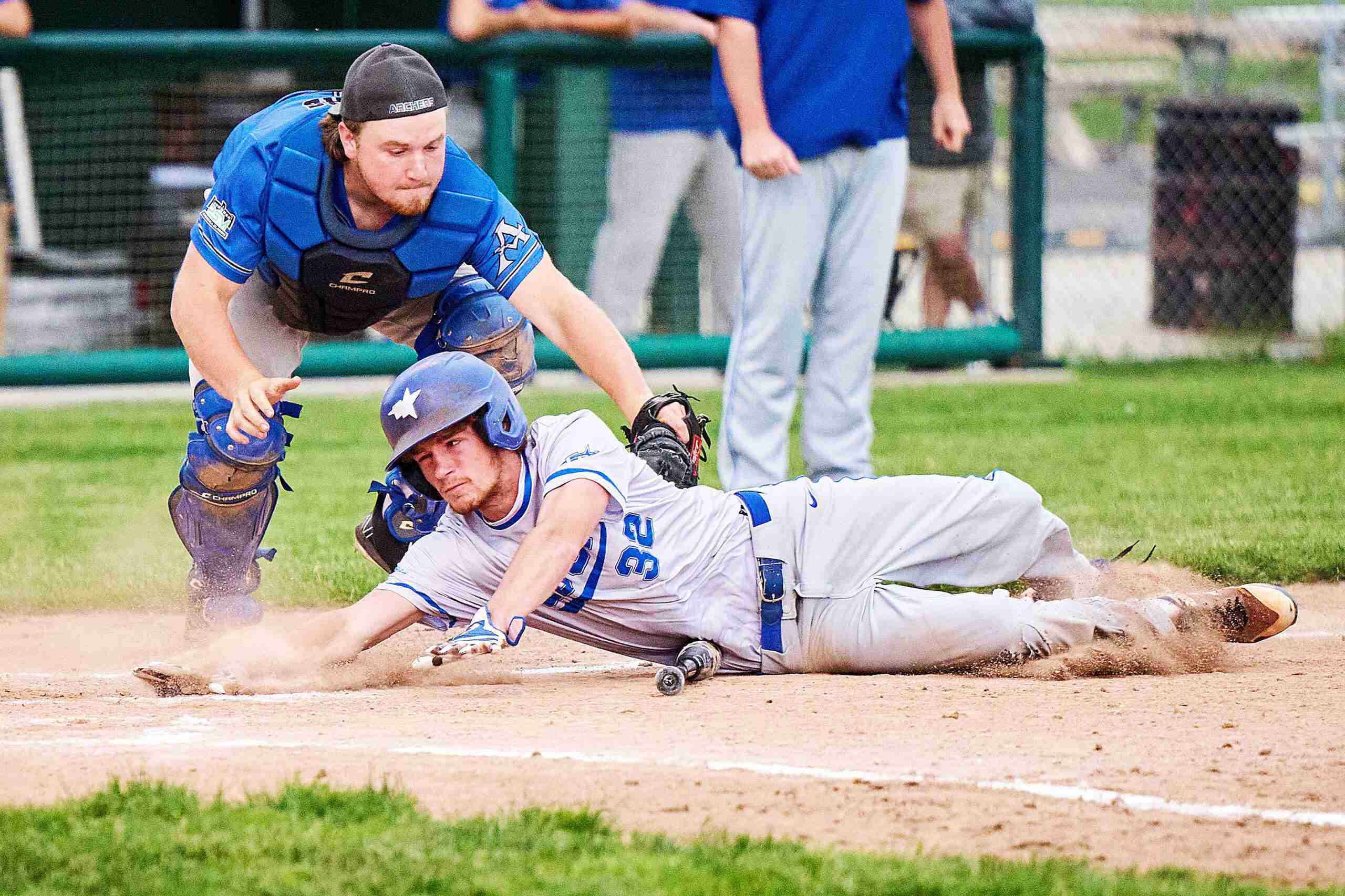 CUT DOWN AT HOME … Edon’s Wade Parrish is tagged out at home while trying to score on a single by Cole Vasquez in the first inning. (PHOTO BY RICH HARDING, STAFF)

BRYAN – For the first 5 1/2 innings the underdog Edon Bombers gave the two-time district champions all they wanted.

The bottom of the sixth was a different story with Antwerp scoring 11 runs on just four hits as they took advantage of several Edon miscues to get a 13-3 win in six innings at Recreation Park in Bryan.

Early on it was Edon taking advantage of scoring chances as they got a single and walk to start the game which led to an RBI single by Cole Vasquez to give the Bombers a 1-0 lead.

The third inning saw two fielding errors by Antwerp leading to an Edon run before Vasquez drove in another run, this time on a groundout, to push the lead to 3-0.

Antwerp began to chip away at the deficit in the fourth as Luke Krouse got a leadoff walk, stole second, took third on a throwing error by Edon catcher Garrett Skiles, and then scored on a sacrifice fly.

The Archers added another run in the fifth with Carson Altimus smacking a triple to right field to open the inning and Chase Clark would club a two-out single to center to draw Antwerp within 3-2.

The first three batters in the sixth would reach base for Antwerp as Krouse walked, Hunter Sproles had an infield single, and Ethan Lichty was hit by a pitch.

Aiden Lichty then tied the game as his grounder to second base was mishandled allowing Krouse to score to tie the game 3-3.

Antwerp grabbed the lead as Altimus drew a bases loaded walk to force in a run before Vasquez would strikeout the next two Antwerp hitters to move him just one out away from getting out of the inning.

Clark would then break the game open with a bases clearing double to left as the Antwerp lead grew to 7-3.

The two-out rally by Antwerp continued with a walk, hit by pitch, an RBI single and then another hit by pitch and a walk with the bases loaded to bring in two more runs to make it 10-3.

After an Edon pitching change and the score now 11-3, Eli Reinhart ended the game with two-run single to right plating Aiden Lichty and Altimus.

Vasquez paced the Bombers at the plate with a single and two RBIs while Konnor Prince had two singles.

Antwerp now faces top seed Wayne Trace for the third time this season in today’s district final back in Bryan.