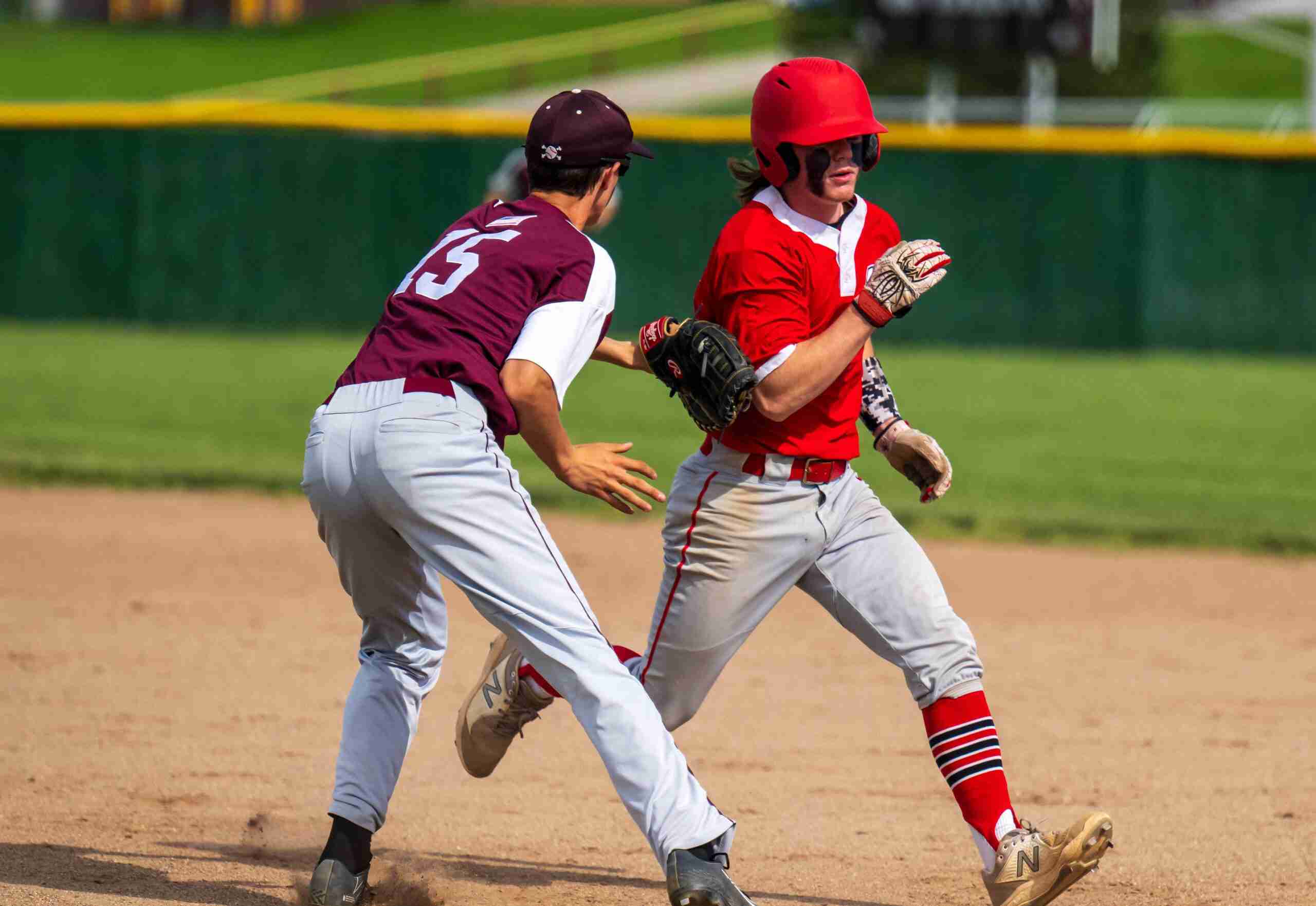 RUN DOWN … Edgerton first baseman Cory Herman tags out Hilltop’s Devin Dempsey after Dempsey was caught in a run down to end the first inning. (PHOTO BY JACOB KESSLER, STAFF)

EDGERTON – Both teams used big innings to score their runs, but it was Edgerton with a five-run fifth as they got a 17-7 walk-off win in five innings at home over Hilltop in the Division IV sectional semifinals.

Edgerton went to work quickly in their first at-bat as they loaded the bases with one out as Nate Swank delivered a single to right field, plating two runs to give Edgerton the early lead.

Two consecutive errors by Hilltop on groundballs allowed two more Bulldog runs to cross the plate as they increased the lead to 4-0.

Edgerton added three more runs in the inning thanks to an RBI single by J. Schliesser and a two-run single from Quentin Blue to make it 7-0 Edgerton after one inning.

It was Hilltop’s turn to load the bases with one out in the third inning setting the stage for a Cameron Schlosser double that drove in two runs to make it 7-2.

After Edgerton pitcher Cole Meyer was able to get a strikeout for the second out of the inning, Reece Haynes clubbed a two-run single to bring Hilltop within 7-4.

Two batters later, Ian Hoffman connected on a two-run double to trim the Bulldogs lead to 7-6 before Meyer would induce a groundout by Zander Runkel to end the inning.

Edgerton responded in the bottom of the inning as Blue knocked in two runs with a triple and Cory Herman reached on an error which scored Blue from third to make it 10-6.

After Corey Everetts was hit by a pitch, Warren Nichols singled to right field driving in two more runs as the lead ballooned to 12-6 at the end of three innings.

With a 12-7 lead going to the bottom of the fifth, Edgerton went on the attack again with Swank tallying an RBI single after two walks to push the lead to 13-7.

After another walk, Dylan Bass reached on an error which plated two runs for Edgerton as the lead was now 15-7.

Blue would then draw a two out walk and Meyer ended it with a walk-off two run single to left for the Bulldogs.

Blue went 2-2 with four RBIs while Swank finished the night 2-4 with three RBIs for Edgerton.

Hoffman, who took the loss for the Cadets, was 2-3 at the plate and knocked in three runs and Schlosser smacked two doubles and had two RBIs.

No. 8 seed Edgerton will face No. 1 seed Wayne Trace (20-2) in a sectional final tomorrow night.

The teams met back on April 21st in a GMC contest with the Raiders winning 9-8.