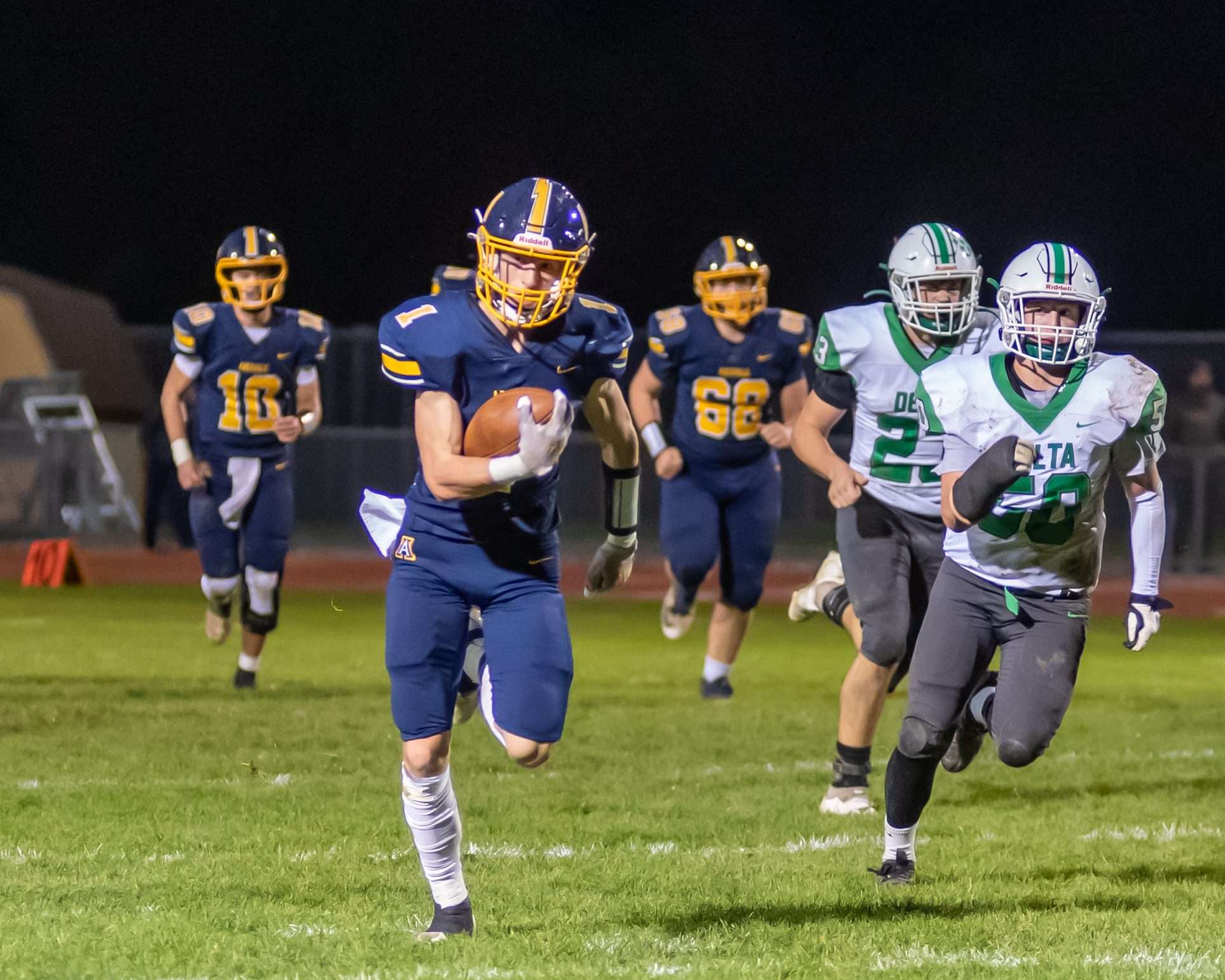 HEADED FOR THE END ZONE … Gavin Bailey out runs the Delta defense after hauling in a pass from DJ Newman on his way to a 49-yard TD in the first quarter. (PHOTO BY JACOB KESSLER, STAFF)

ARCHBOLD – The heavy underdog Panthers had their first two possessions end with fumbles which Archbold converted into touchdowns as they rolled past their NWOAL rival 44-7.

The Bluestreaks came out clicking on offense with a six-play, 96-yard drive to start the game as quarterback DJ Newman scampered the last 23 yards for a TD to take a 7-0 lead.

Delta then turned it over on just their fourth play of the night on the ensuing possession as Archbold took over at the Delta 42-yard line.

Archbold moved to the Delta 18 where a pass interference penalty against the Panthers on fourth-and-five kept the drive alive.

Two plays later, Carson Dominique punched it in from one yard out to make it 14-0 Archbold with 7:36 left in the first quarter.

Delta’s next possession met the same fate as their first one with Archbold’s Jack Hurst forcing and recovering a fumble to give the Bluestreaks the ball at the Delta 15-yard line.

From there, Dominique carried the ball on four straight plays, culminating with a one-yard TD run to extend the lead to 21-0.

Archbold’s offense would get the ball back quickly after a three-and-out by the Panthers offense giving the Streaks the ball at their own 47-yard line.

This time Archbold went to the air with Newman finding Gavin Bailey on a 49-yard TD pass down the right sideline on just the third play of the drive to increase their advantage to 28-0.

A nice kickoff return from Bryar Knapp gave Delta their best starting field position of the night and resulted in their best offensive series of the game.

Delta pounded the ball down the field led by four carries from Jerremiah Wolford totaling 22 yards and eventually giving the Panthers a first-and-ten at the Archbold 21.

On a 3rd down and 12 at the Bluestreak 23-yard line, Panther quarterback James Ruple connected with his brother Justin on a quick slant that Justin would take to the end zone for the score to cut the deficit to 28-7.

Archbold responded with an impressive 13-play drive that covered 81 yards ending with a Newman to Karter Behnfeldt three-yard TD strike to give Archbold a 34-7 lead at halftime.

The turnover problems continued in the second half for Delta as they fumbled the opening kickoff which Archbold recovered thus giving the Bluestreaks another short field to work with.

Five plays later it was Newman finding paydirt from one yard out to make the score 41-7 and putting the running clock into effect per OHSAA rules.

Following another Panther turnover on their next possession, this time an interception by Stephen Diller, Archbold capped off the scoring for the night with a 37-yard field goal by Krayton Kern at the 1:48 mark of the third quarter.

“It was good win for our guys. The defense forced some turnovers and the offense put points on the board,” said Archbold head coach David Dominique.

“Delta’s a good football program, they’re a physical group of guys and I thought we made good adjustments (offense and defense) as the game went on.”

Dominique paced the Bluestreak ground game with 93 yards on 11 carries and two TDs.

Delta (4-7) was held to 102 yards of total offense, with 72 of those yards coming from the running game led by Wolford with 25 yards and Josh Tresnan-Reighard adding 22.

Archbold (11-0) will host No. 9 Collins Western Reserve (7-3) in the regional quarterfinals next Saturday at Bluestreak Stadium.