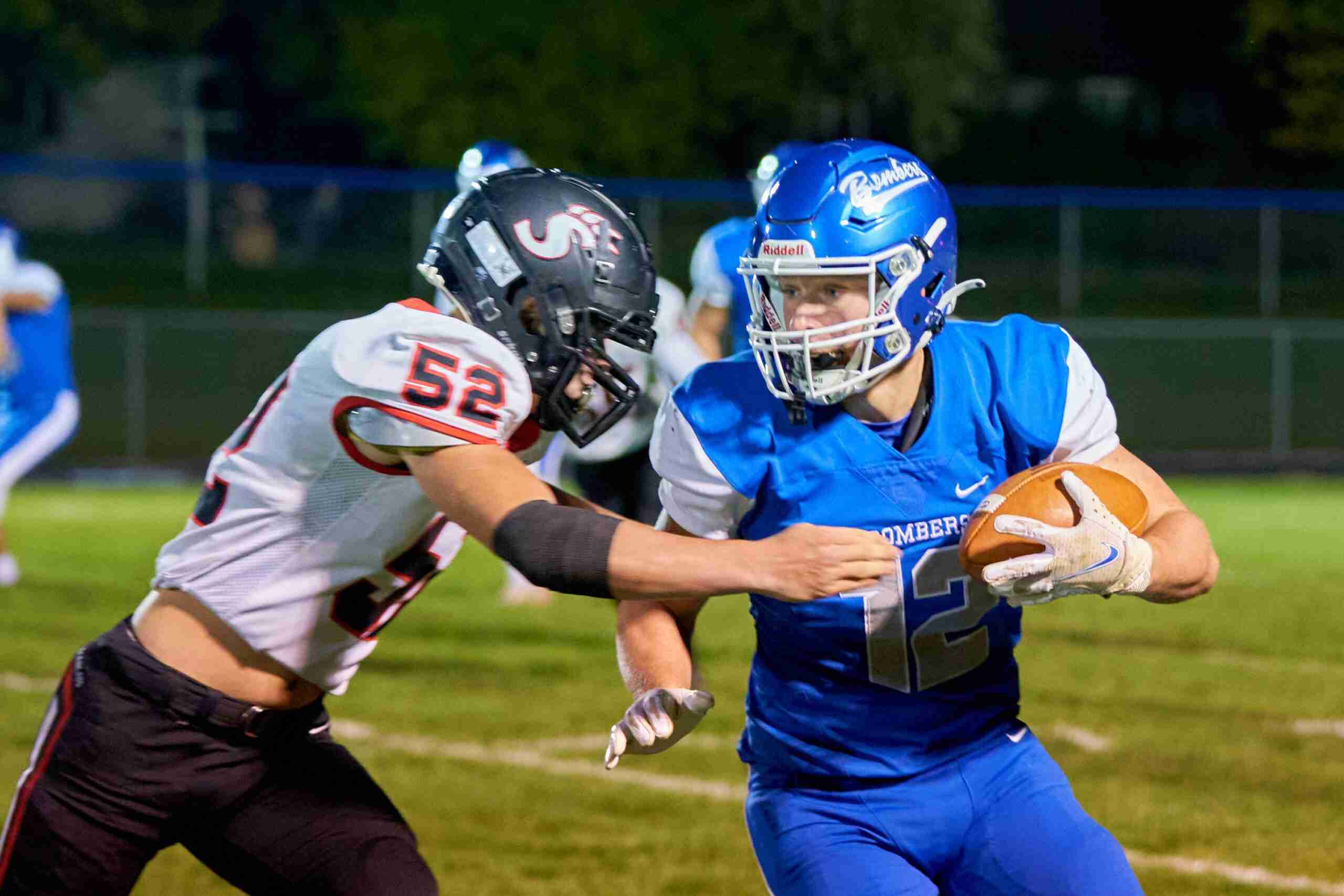 LEADING THE CHARGE … Edon receiver Gannon Ripke takes on a Spencerville tackler in the first half of Saturday night’s playoff game. (PHOTO BY RICH HARDING, STAFF)

“It was time to do it,” Olwin said. “We were trying to run out the clock. They tightened down on our screen passes, so we had to try something else.”

The play calls came at a surprising time, with Edon facing a second down and 25 yards to go from the Spencerville 49-yard line. But the plays worked to perfection.

On the first, Ripke gained six yards. Then on third down and 19 yards to go from the 43-yard line, Ripke broke loose for a 43-yard touchdown run. The score gave Edon some breathing room, putting them on top, 28-13, with 2:24 left.

“Once I made the first guy miss, there was no one else back there, (so I was able to take it the distance),” Ripke said. “We have a lot of things we need to fix, as we had some holding and false start penalties tonight. But (it’s the playoffs) and we survived and advanced.”

Ripke’s TD run was also significant because Specerville scored a TD on a 10-yard pass from Nate Coulter to Dale Smith, with just 44 seconds left. The extra point kick cut Edon’s lead to just eight points. But Edon was able to recover the onside kick to preserve the 28-20 win.

Ripke ended up with 250 total yards for the night, on 201 yards receiving and 49 yards rushing. Ripke would have even had more yards, but a Ripke TD reception was called back because of a penalty.

“Whatever I can do to help the team win,” Ripke said. “We have a lot of receivers who can make plays and Carter (Kiess), (Caden) Nester and (Ethan) Steinke all made some nice catches tonight.”

Save some key turnovers by Spencerville (5-6) and the outcome could have been different. In the first half, Edon recovered Spencerville fumbles at the Edon 10 and four-yard lines.

Then in the second half, Nester stopped another big Spencerville threat with an interception in the end zone.

In the meantime, Edon jumped out to a 22-0 first half lead on three Drew Gallehue touchdown passes, of 25 yards to Ripke, four yards to Nester and 63 yards to Kiess. Gallehue also threw successful two-point conversion passes to Hayden Dye and Ripke.

Spencerville finally got on the board with just four seconds left in the first half on a 17-yard pass from Coulter to Eli Harter.

Then, in the third quarter, following an Edon punt, Spencerville drove 80 yards in six plays, scoring on a 12-yard run by Tyler Koenig. However, the two-point conversion pass failed, leaving Edon with a nine-point lead, at 22-13, with three minutes left in the third quarter.

In the meantime, Edon moved the ball well, but had consecutive drives end on the Spencerville 17-yard line and 25-yard line, respectively.

In addition, the Edon defense was able to hold Spencerville at bay on two consecutive drives, forcing one punt and taking over another on downs at the Spencerville 31-yard line. Ripke later scored on his 43-yard run on that drive.

“We’re really trying to clean it up,” said Olwin, regarding the 80 yards in penalties that Edon suffered through. “Their passes got us a little bit, but we did a lot better against that in the second half. The good thing is, we got three turnovers tonight and we’ve won every game when we’ve (forced} three or more turnovers.”