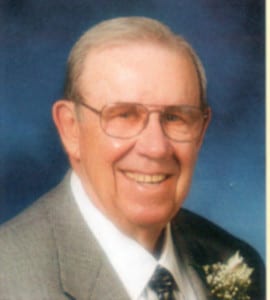 During Roger’s high school years at Montpelier he excelled in sports, especially during his senior year, being honored as a 1st team halfback in football and 1st team in basketball, both for NWOAL.  Roger also earned high honors in Varisty Track as the only athlete to have four 1st place finishes in a NWOAL meet in the 100 yards, 110 yards high hurdles, 300 yards low hurdles, and high jump.

In 1944 Roger graduated from Montpelier High School.  Roger started his post secondary schooling at the University of Michigan and also had the privilege of playing football for the Michigan Wolverines, before being drafted into WWII.  Roger entered the US Navy and while enlisted played on the US Naval Basketball Team, being voted the Northwest Navy All-Star Player of the year.  After his honorable discharge he went to the University of Toledo majoring in pre-med.  While at Toledo he played basketball for the Rockets earning a Varsity Letter and was a member of the Varsity T club.  In 1949 he returned to the University of Michigan and earned his bachelor’s degree in general science in 1950.    On August 23rd 1950 he took a break from his studies and married the love of his life Marlou J. Gilman in Tecumseh, Michigan.  They both left Michigan and went to Case Western Reserve where Roger earned his Doctorate in Dentistry in 1954.

Roger was a member of the First Presbyterian Church of Montpelier and was a past president of the Men’s association.  In 1959-60 Roger was the President of the Montpelier Rotary Club and received the Paul Harris Fellowship in 2003.  He was a member of the American Legion, Montpelier Chamber of Commerce, Loyal Order of Moose, a lifetime member of the American Dental Association and served as Maumee Dental Society President.  Roger was also a member and selected into the Athletic Hall of Fame by the Historical Society of Williams County.  One of Roger’s favorite past time memberships was at Hillcrest Country Club in Montpelier.

He was preceded in death by his parents and a brother Richard F. Ely.

A memorial service for Roger will be held on Monday, March 18th at 12 noon at the First Presbyterian Church in Montpelier.  A time to receive friends will be from 10 am until the time of service on Monday.  A private interment will be held at Riverside Cemetery at a later time.  In lieu of flowers donations may be made to the First Presbyterian Church.  Condolences may be made online at www.thethompsonfuneralhome.com