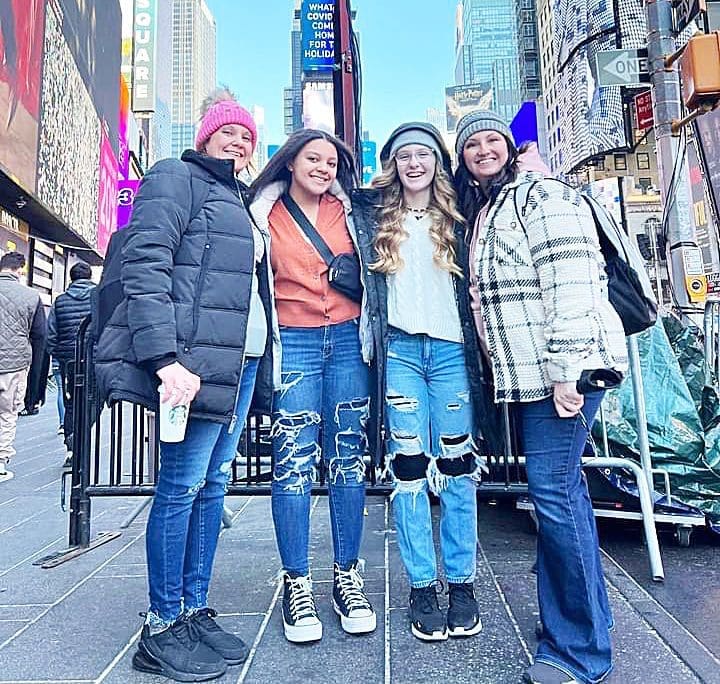 TIMES SQUARE … These four had a great day together in New York City as they went on the fundraising trip in December 2022. L to R…Christine and Addilynn Bowers, Kaylynn and Loralee Bartlett. Posing in the fabulous and famous Times Square brought quite a thrill. (PHOTO PROVIDED BY LORALEE BARTLET)

This was not just a trip for fun, although it certainly was fun! It was also a fundraiser, which was announced on September 8 by the Edgerton Class of 2024 Junior Parents.

Ticket sales, $200 per person, began at that point with the money designated for the 2023 Post Prom activities.

What a perfect opportunity for a family to get away and make memories, while supporting the EHS Class of 2024 after prom activities.

According to the Post Prom Committee, they “sponsor a Post Prom Party from 11:00 p.m. to 2:00 a.m. with the intention of giving the students a great time, while designed to be completely safe.”

“The Post Prom party is a substance and alcohol-free environment with no entrance fee for the student and their guest.”

“This is entirely funded through fundraising activities, business donations and generous parent donations.”

“The success of Post Prom relies on our ability to keep students entertained and motivated for the duration of the party.”

“A wide variety of activities are offered to keeps students engaged, having fun, and making fabulous memories with their friends. Prizes will be given out at the end of the evening.

As far as this creative idea was concerned, those who got in on it had a great time! Lots of chatter and laughter was enjoyed as they started out, with things getting a little quieter as people began to fall asleep for the long night ride.

Arriving in NYC around 7:30 a.m., the group was dropped off and everyone was free to spend their day as they chose.

They all broke up to head out for the day, with the knowledge that they needed to be back on the bus before 10 p.m., when they were scheduled to depart for home.

Everyone made lifetime memories that day, getting to see the World Trade Center, Central Park, ride subways if they chose, and take in many other delightful aspects of this world class city…NYC!