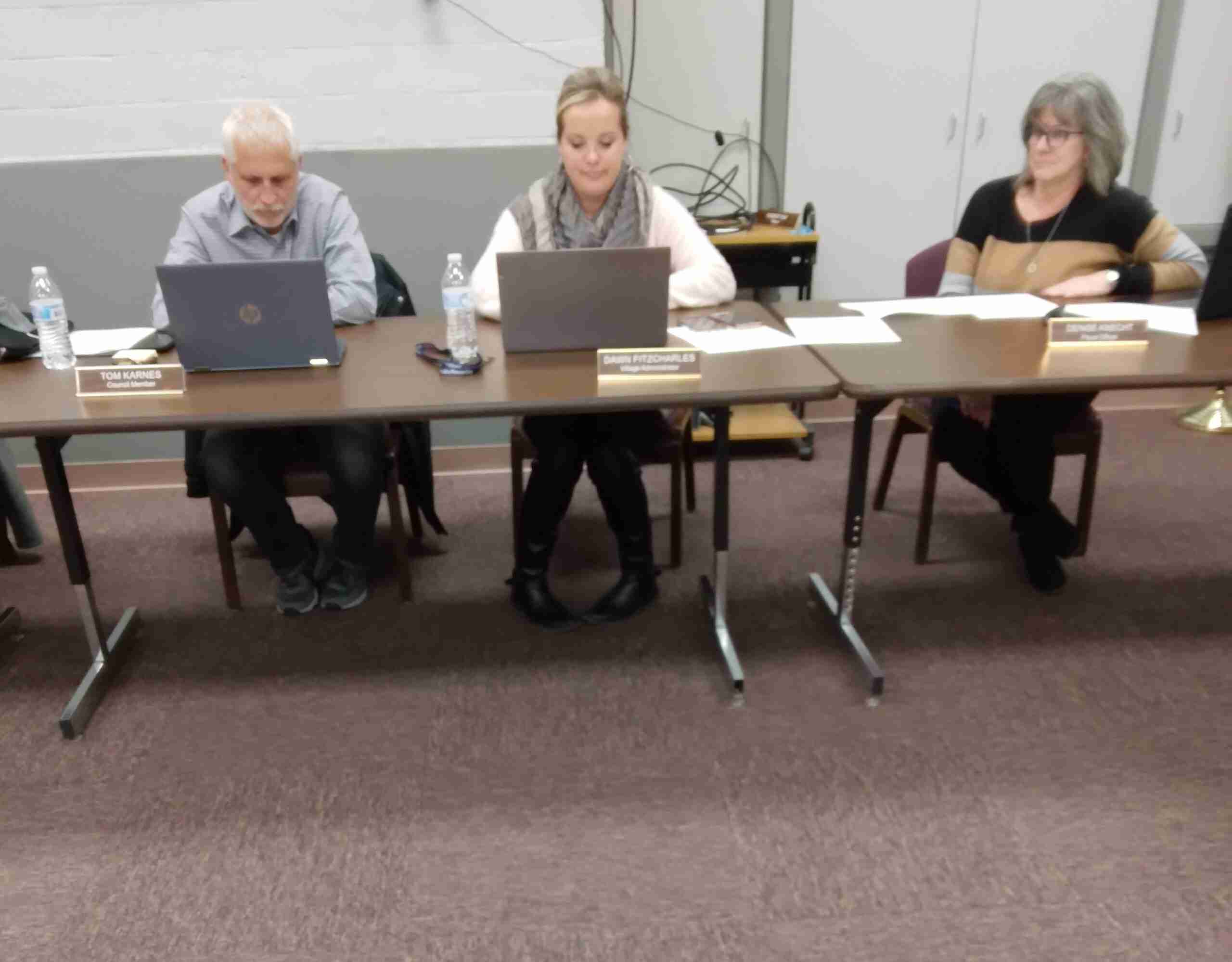 UP FOR AWARD … Edgerton Village Administrator Dawn Fitzcharles (center) reported that Edgerton has been nominated for a national award, because of both the village’s community support and care responses during COVID. The award will be given out in June, in Nashville. (PHOTO BY DANIEL COOLEY, STAFF)

The meeting began with the village council approving of the meeting minutes from January 18, 2022.

Village Administrator Dawn Fitzcharles reported that the village had a pretty good start on the snow removal plan for Wednesday’s big snowstorm.

She reminded the community to make sure that all fire hydrants are cleared off enough to be seen and that in case of a housing need during the storm, that the town hall has a backup generator and can serve as emergency housing.

In addition, there is a published number for the community to use in case of emergency needs: 419-633-0162. That way, the 911 number can be used without being tied up as much..

Fitzcharles reminded everyone that if the county goes to a Level 3 snow emergency, anyone caught driving during the emergency could be issued a citation. “An issuance of Level 3 is for public safety,” said Edgerton police chief Gary Plotts.

Fitzcharles also reported that they had had a really great meeting for the Safe Routes to School gathering, put together by Maumee Valley Planning.

There will be a meeting with the village, Maumee Valley and Edgerton Schools to go over several areas that were discussed at the meeting and how some of those things could be implemented,as part of the Safer Routes to School project.

Next, Fitzcharles stated that she was “very excited to report that the village of Edgerton had been nominated for a national service reward, due to its community support and the Care Response during Covid.” The award will be given out in June, in Nashville.

Next up was Fiscal Officer Denise Knecht’s report. She stated that all the W2’s had been mailed and is working on getting the financial report completed by the end of February.

That was followed by the village council’s approval of paying the bills, submitted by Knecht.

Next, council approved Ordinance 1092, which deals with the current replacement pages to the village’s codified ordinances. Knecht stated that “each year, the village takes all previous ordinances and gets everything codified and up to date.”

Council then approved Ordinance 1093. In this one, there was the need to change the wage allocation so that those wages could go to the general fund.

Here, according to the agenda sheet, the ordinance established “the salary allocation for the fire chief and declaring an emergency and providing for a supplement to the 2022 annual appropriations.”

Next, Fitzcharles reported that there are up to 20 locations around the village and that there is a plan to work on them and improve them.

She stated that this project could be helpful to Oak Street, involving the Safe Routes to School project. The village council approved the project.