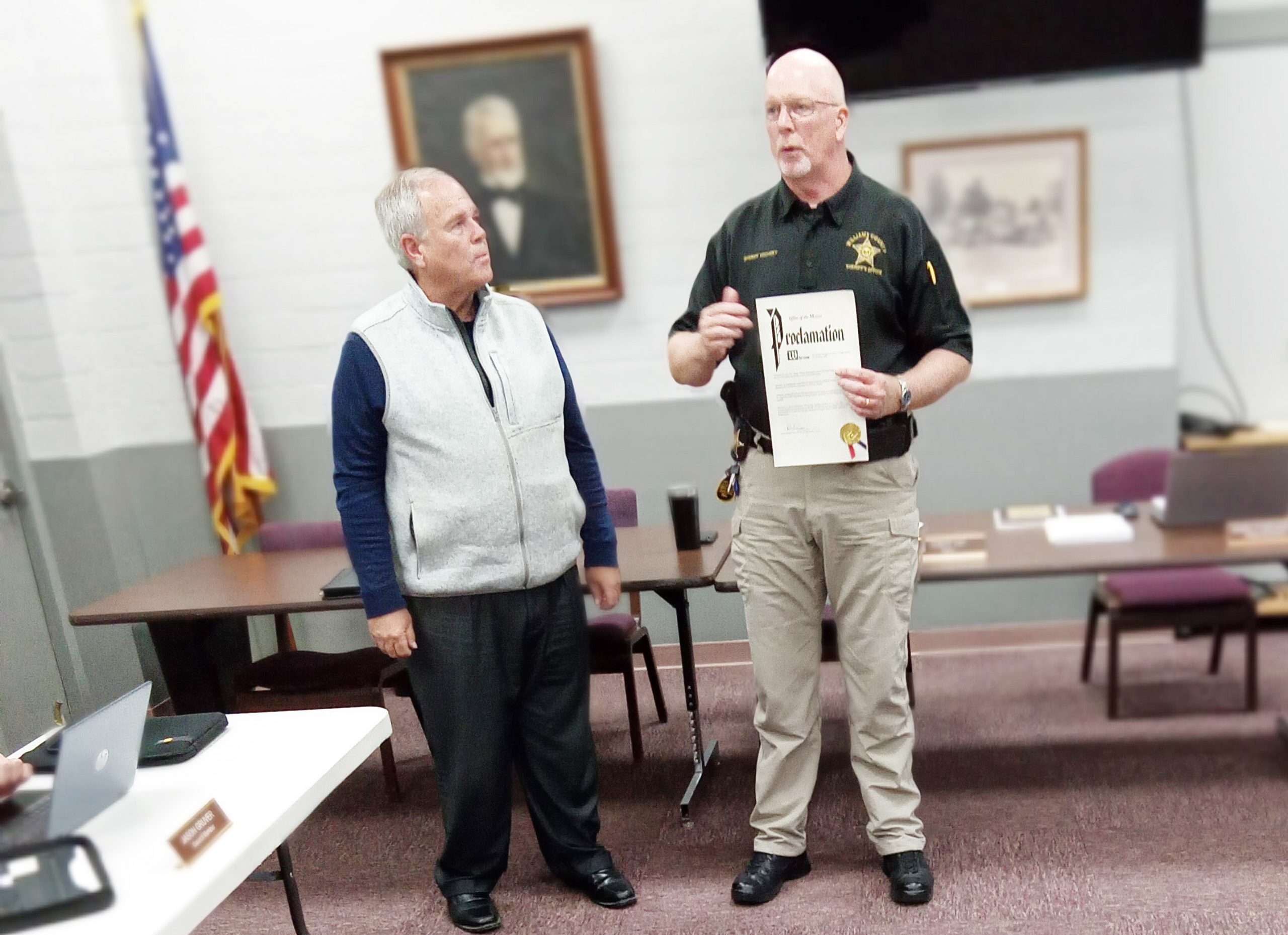 COMMENDATION … Williams County Sheriff Tom Kochert received a commendation for helping the Edgerton Police Department when it was lacking in numbers. (PHOTOS BY DANIEL COOLEY, STAFF)

The Edgerton Village Council meeting of October 4 began with the Pledge of Allegiance, followed by a prayer from Mayor Robert Day.

Next, Williams County Sheriff Tom Kochert received a commendation for his help given when the Edgerton police department was understaffed. The Edgerton Police Department is now in good shape.

In the mayor's report, Day gave thanks to Karl Yarger and Amy Buchs for their work on the Edgerton mural.

He also reported that the Edgerton Fall Festival will take place on Saturday, October 8, from 10 a.m.to 2 p.m.

Also there will be a workday on Wednesday, October 12, at a resident who needs help.

In the administrators report, Dawn Fitzcharles said that at a Williams County subcomittee meeting, the village received funding in the amount of $275,000 for the water treatment project.

The total cost of the project is $681,490 and Fitzcharles said that the village will try to do several grants in order to help cut down the cost.

In addition, Fitzcharles said that there was an evaluation of the thermostat program with AMP.

Once it is determined what is needed, Fitzcharles said that she will bring those results to the village council.

In one other item, Fitzcharles stated that the Oak Street sidewalk project project has begun.

The east side of the project has been completed and work has begun on the west side.

Fiscal Officer Denise Knecht gave a financial report, that was approved by council. Council then approved of the motion to pay the bills.

Police Chief Gary Plotts then gave a report. He said that they had an auction on several things they no longer needed and the items were sold.

Plotts said that he is currently working on getting out all the bugs on the FOBS used for getting into the village building and that the cameras in the building have all been installed.

Also, Plotts said that he has talked to the school principals about bringing back the DARE Program and they are on board.

Plotts said that he is working on the details with the schools, in order to get the project implemented.

Once it's going, Edgerton will have the only DARE Program in Williams County.

Plotts said that K-9 Jax is going through a lot of training and should be certified by, at the latest, the end of October.

Next, council approved resolution 2022-024. According to the agenda, this authorizes "the village administrator  to execute and file an application with the Ohio Department of Natural Resources for public recreational purposes..."

The resolution authorizes Fitzcharles to look into getting restrooms in Town Park and looking at a grant for that purpose.

Next, council approved the amended exhibit A to the electric rules and regulations.

This involves increasing the price for an electric meter pan and after hour trip charges of $75 to shut off service.

Council then approved, according to the agenda, "the Fiscal Officer Denise Knecht, as the council representative designee for the public records." 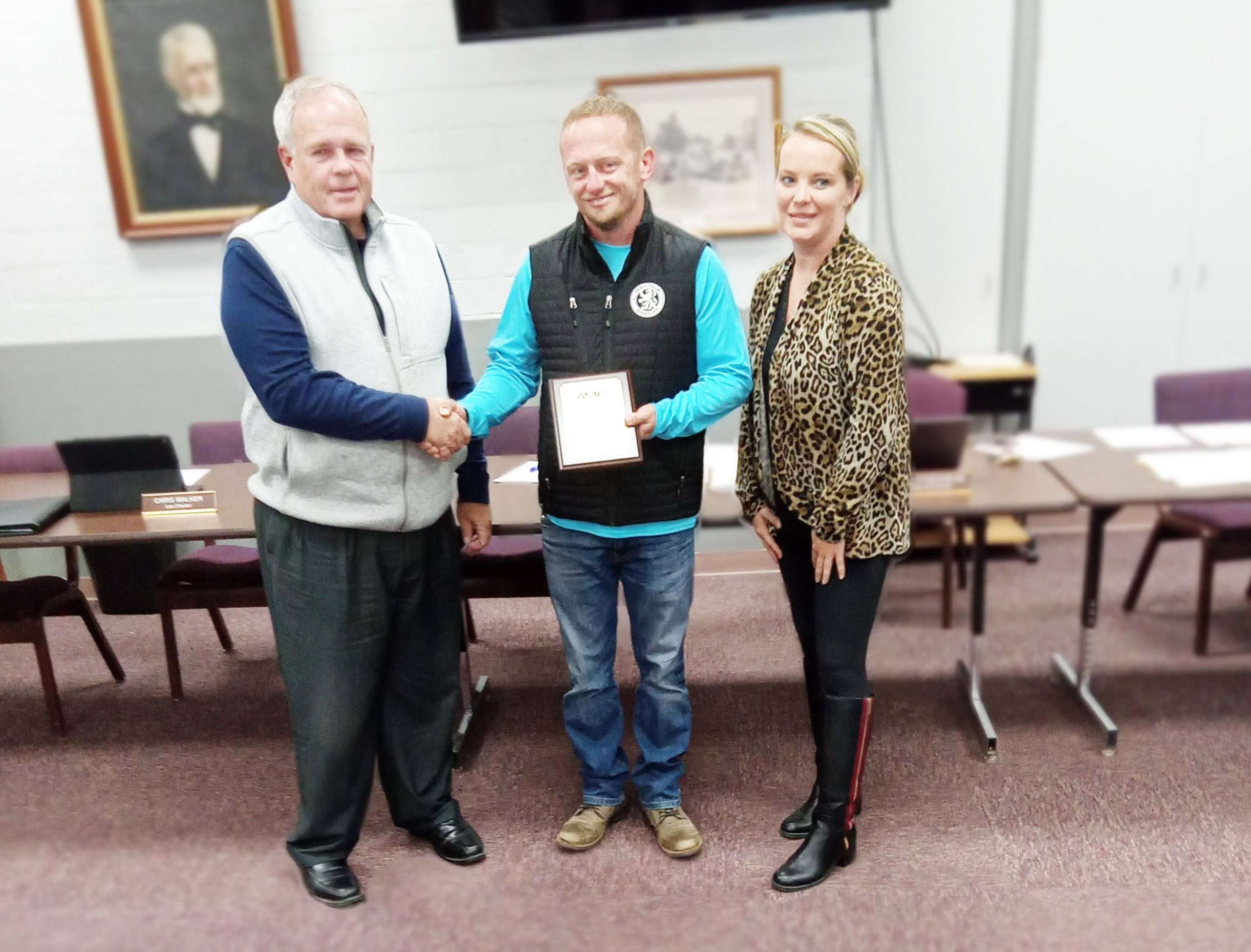 Knecht stated that there is three hours of certified record training for council members.

Next, council approved of updating the personnel and procedures for the police department.

Full-time hours per week for officers will now be 40 hours and the eligible work weeks will be from Monday, 12 a.m. to Sunday, 11:59 p.m.