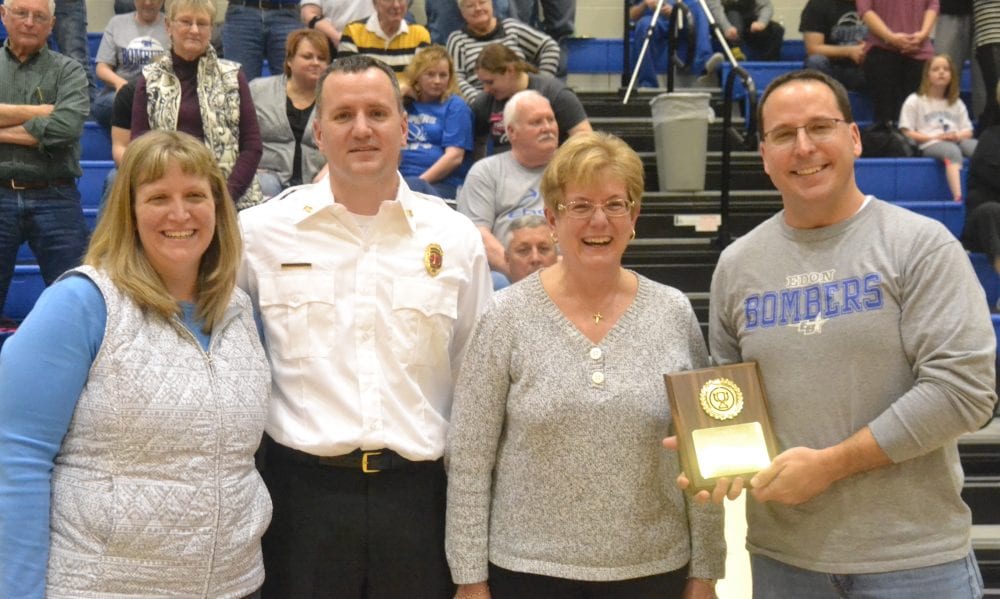 A stunned and shocked Jeff Schaffter left his seat during the Edon boys basketball game on Friday evening to accept the Jerry Luce award from the awaiting hands of Allyn Luce, Jerry’s son, who was accompanied by his mother JoAnn and sister Jennifer (Luce) Maier. Jeff Schaffter is now among the many recipients of this well-deserved accolade that has been awarded by the Luce family over the past couple of decades.

Jerry Luce was member of the Edon community, whose life was tragically cut short in 1993 as a result of a automobile accident, in which his wife survived.

24 years later, she, along with their children, is handing out the 23th Jerry Luce award that bears his name and deeply outlines his legacy.

The Jerry Luce award was brought to life with help of former Superintendant Kent Adams.

The family was given some money and told to “do something special with it”, in the memory of Jerry.

As heads were brought together, they determined that something special needed to be done for the adults of the community that often give of themselves selflessly and go unrecognized. With the help of Kent Adams, the Jerry Luce Award was born.

“Jerry was very involved in the community and his name and legacy will forever live on.”

Moments before calling Schaffter’s name, she explains the criteria. “The awards goes to an adult for loyalty and service to the Edon area community” states Mrs. Luce. “This person this year is, well, if you want something done or if you see something that needs to be done, this person will do it.

This person is involved in church activities, men’s group, service to the church, involved in school, involved in sports whether its flag football or other things… He’s also involved with Kiwanis and always looks out for Edon…”

As Jeff’s name was called, thunderous applause and cheers erupted in the gym that seemed to help him float to receive his award.

Even his wife Jamie was shocked, “I had no clue!”

“For what this stands for, there is no bigger and better representation and I’m just honored to be a part of it.” stated Schaffter. “Every year you see people come out here and you thank the Luce family that do this. You see the great people who have done great things for our community and you don’t even think, or that [I’m] deserving of this or to even be considered.

For a brief moment I’m like, that can’t be me”

“I’m just so stunned and shocked. This community means a lot to me”

Angi Campos may be reached at publisher@thevillagereporter.com