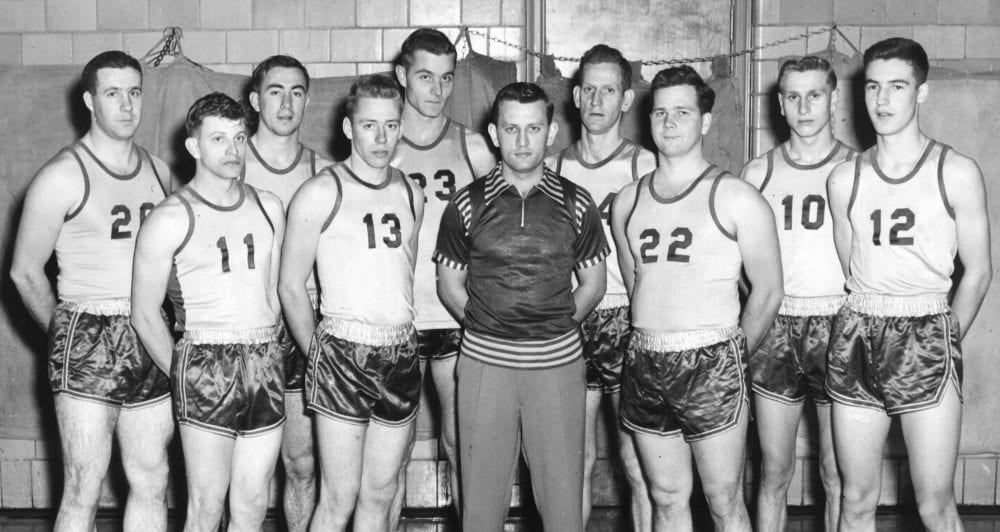 In 1955, the world was ten years into the ‘Nuclear Age’. The Salk Polio vaccine was declared to be safe, and kids were crowding around television sets to see a new program called ‘The Mickey Mouse Club.’ A new concept in food service began with the first McDonald’s restaurant, and in Southern California, a new concept in family entertainment was underway with the opening of an amusement park entitled, Disneyland.

Yes…Northwest Ohio was once home to a short-lived local conference of ‘semi-pro’ basketball teams. Under the reins of President/Player Hugh Lindsey of Bryan, the nine-team conference with the most unusual moniker was organized for play in nine different high schools in the area. Alan Benjamin, a shootist for the semi-pro Montpelier Hawkeyes, questioned the title of the league. “How could it be called semi-pro,” he asked, “…when we never received any type of pay for our play? As semi-pro teams, shouldn’t we have been paid something? In fact, WE actually had to pay for each game that we played.”

Each team was led by a manager, who was responsible for the finances, scheduling and coaching of the team. For Bryan, that was Jim Sickmiller, and Edon had Roy Held at the helm. Forrest Yoder was at the helm of the Edgerton squad, Don Steinke led Montpelier, and Ted Lovejoy managed Archbold. Stryker was fronted by Richard Frank, Kunkle had Bob Moore, and Marvin Beals managed West Unity.

Each manager was required to adhere to the league rules and regulations, as laid out by Mr. Lindsey. By today’s standards, some of the rules appear draconian, but of such was the game of the day. In 1955, the Lakers still played in Minneapolis. The Pistons still played in Fort Wayne, Indiana. There was no such thing as the Golden State Warriors or the Atlanta Hawks, as the Warriors were playing in Philadelphia, and St. Louis was the home of the Hawks. Everyone wore shorts that were actually short, and high tops that were high. There was no ‘hip hop’ hoops, and the rules of the day were easier to accept. According to the directives from Mr. Lindsey…

• There will be a charge of one dollar per player for each game played (Almost $9.00 equivalent, per game, in today’s money). This money will be used by the manager for team expenses, and must be paid whether the player is able to attend the game or not. At the end of the season, if there is any money left after expenses are disbursed, it shall be divided equally among the players.

• All equipment needed will be furnished by the manager with money received from players each game. (This includes uniforms)

• A player may voluntarily quit the team at any time, or he may be discharged from the team by the manager at any time. In either case – the acting party must notify the other five days in advance of the next scheduled game.

• A player will not be allowed to play on another team in the league, but may play on outside teams (such as church league teams), as long as he does not desert this in case they should both be playing at the same time.

• All players must accept responsibility as a group and share costs in case of any damage done to public or private property during any scheduled game.

• Fighting, stealing, cheating or causing a disturbance of any kind will not be tolerated, and any player guilty of same shall be discharged from the team.

• If a player cannot attend any scheduled game, he must notify the manager, if at all possible.

Games were played in the high school gymnasiums of the respective teams, beginning at 8:00 p.m., and were usually officiated by a member of the local school faculty or administration. Quarters were ten minutes in length, and each man was allotted six fouls per game.

Other than those stipulations, the standard high school rules of the game were used. Being the mid-1950s, the three-point arc did not exist, and would not make an official appearance in the NBA or the NCAA for more than two decades. At the end of the 18-game regular season, a double-elimination tournament took place to determine an overall champion of the league.

In 1960, a new independent league was formed with Roger Strup of Edgerton as the president, and the area expanded significantly. Whereas the old Northwestern Ohio Semi-Pro Basketball League had nine teams that played each other twice a year in a home-away format, the new league had a 15 game regular season, with the expanded lineup of 16 teams playing each other once a year. There was no admission charges for any of the contests.

Montpelier retained a team from the old league, but under a new, temporary name…the Independents. Bryan, Edgerton, Stryker and Pioneer also returned teams, and joining them were teams from Ridgeville Corners, Alvordton, Hicksville, Holgate, McClure, Farmer, Ayersville and Antwerp, along with Indiana teams from Butler, Harlan and Ashley-Hudson, which was occasionally referred to as Angola.

The Antwerp and Harlan teams went by the boards, and were replaced by a potent team from Defiance. On Monday, January 30, 1961, the Montpelier Independents took on a team composed of Montpelier High School faculty members in a novelty game in the high school gymnasium. Admission for the game was 25 cents for students, and 50 cents for adults. Dale Fair landed a game high 20 for the MHS faculty, but Benny Beck dropped in 15 to lead the Independents to a hard fought 60-55 win.

Interest in the so called semi-pro league began to wane, and more teams were shuffled in and out of the league for the 1962-63 campaign. Pioneer, Edgerton, Ridgeville Corners and Holgate were amongst the communities that were able to return teams, along with Montpelier.

The one-time Hawkeyes again had a change of monikers, as they dropped the title of Independents to become the Montpelier Merchants. A new team in the conference was fielded by Ney, and on January 3, 1963, the newbies of Ney were issued a rough indoctrination by the Merchants to the tune of 102-57. Al Benjamin led all scorers with 28 for Montpelier, who jumped out to a 16-point first period advantage, and never let up off the accelerator.

As more players opted out of the pay-to-play semi-pro leagues and into much less expensive church leagues, the days of the Northwest Ohio semi-pro cagers vanished into history. Time takes its toll on all things, and for the most part, most of the organized hoops action taking place around the area today is to be found in the school teams during the winter months, and the 3-on-3 tournaments during the summer.

There was a time though, when grown men donned the short pants, laced up their canvas high tops, and represented their communities on the hardwood as ‘semi-pros’.

The game has changed a lot over the last 60-plus years. Society too has changed a lot, and not for the better. Although it would mean returning to a world where the ‘semi-pro’ entertainers had to pay to entertain an audience that received free admission, it would be nice to return to a local gym in the early years of the Nuclear Age to revisit the game in the much purer form that it was then.