Evergreen Vikings Go On A Three Spree To Bury The Fayette Eagles, 61-40 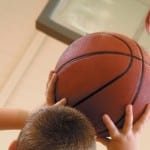 METAMORA – Sometimes even a decent effort just isn’t good enough. The Fayette Eagles put up 10 points against Evergreen on February 9…not great, but not bad either. The Vikings responded with six treys and three deuces in a 25-10 onslaught that eventually saw the home team pull out a 61-40 win.