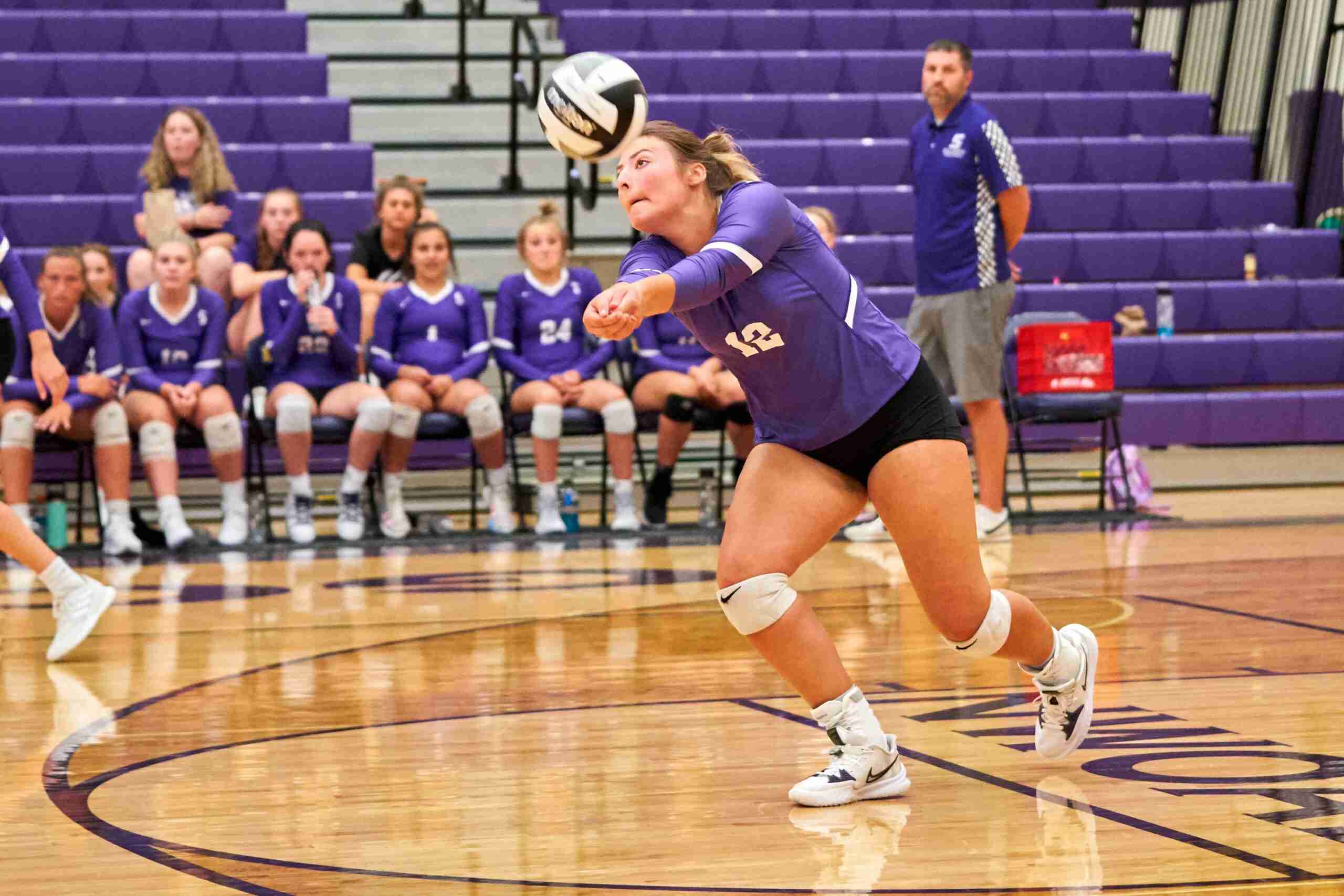 COMEBACK WIN … Katie Floyd receives a serve for Swanton, who rallied from a 2-0 deficit to win the last three sets and knock off Bryan (PHOTOS BY RICH HARDING, STAFF)

Gwen Spengler recorded 22 digs for Bryan, including the 1,000th of her career, Jordan Beck had 20 digs, and Crystal Fillman dished out 25 assists.

The Eagles captured the first two sets and then responded to take the fourth after a Pettisville win in the third as they defeated Pettisville 25-10, 25-18, 17-25, 25-12 in a non-league meeting. Kendal Bonney paced a balanced North Central (3-0) attack with 19 kills, 10 assists, nine digs while Alexia Miller added 15 digs. Paris Coopshaw tallied 15 digs for the Blackbirds (1-3) and Liz Rochefort had 10 kills.

The Bluestreaks racked up 27 aces as a team led by Chaney Brodbeck with 14 in Archbold’s 25-16, 25-7, 25-13 victory over Evergreen. Addi Ziegler contributed 26 assists for Archbold and Carsyn Hagan had eight kills.

Sam Myers with a 44 and Caden Bishop tallied a 49 to lead Pettisville over Holgate in a BBC dual match at Ironwood Golf Course. The Blackbirds effort was completed by a 50 from Blayn Meck and Tobin King posted a 53.

Colin Patten carded a 38 (+2) to lead North Central to the win over Edon at Suburban Golf Course. Zack Hayes was next for the Eagles with a 39, Mason Sanford shot a 42, and Ben Petit added a 45.

Esten Kennerk posted a 41 to earn match medalist as Edgerton fell to Ayersville at Moose Landing Golf Course. The Bulldog’s total was rounded out by Kaden Kennerk (45), Nate Swank (46), and Braden Leppelmeier (63).

The Bluestreaks were led by Cahle Roth’s 40 in a victory at Toledo Christian. Luke Rosebrook was right behind Roth with a 41, Charlie Jones carded a 44 while Zach Short and Cade Miller tallied 54s.

Garrett Swank fired a 37, and Mazin Rukieh shot a 38 as Swanton knocked off Lake in a dual at Valleywood Golf Course. Swanton was rounded out by Sam Betz with a 40 and Ryan O’Shea tallied a 43.

The Indians bounced back from a loss the night prior led by a 41 from Andy Scherer to defeat Otsego at Ironwood. Jackson Gleckler tallied a 42, Riley Morr matched his season best with a 44, and Zach Puehler had a 47 to finish off the scoring.

Elijah Kuszmaul produced the Cadets low score with a 46 as Hilltop beat Fayette at Patriot Hills Golf Course. Averie Johnston was next for Hilltop with a 48 while Ian Hoffman and Ella Calvin each fired a 49.

Match medalist Owen Lemley led Fayette with a 42 and Wyatt Mitchell added a 45.

Halle Frank was medalist with a 44 to pace the Indians to a 197-205 win at Ironwood Golf Course. Calaway Gerken fired a 49 for Wauseon, Ashley Fisher had a 51, and Jordan King recorded a 53. Lola Giesige fronted Edgerton with a 49 followed by Ashlyn Sleesman (50), Bri Reliford (51), and Greta Brown (55).

Carly Grime posted a 44 to help Archbold set a new school record with a 190 to get wins over Liberty Center, Antwerp, Crestview in a quad match at Pond-A-River Golf Course. Brayton Huffman came home with a 45, Aniyah Copeland tallied a 49, and Alli Bickel shot a 52.

Alex Peete started the scoring for the Vikings with a penalty kick at the 34:00 mark of first half and Evergreen would go on to a 4-0 lead. Peete scored again late in the second half with Riley Dunbar and Evan Lumbrezer scoring in between for Evergreen.

Bryan (5-0, 2-0 in NWOAL) started fast with an Allie Zimmerman goal off a through ball from Marah Smith just two minutes into the match as they rolled to a 7-0 win. Zimmerman scored two more times in the second half to give her a second hat trick of the season. Ella Miller, Ella Rau, Delilah Taylor, and Lily Schlade accounted for the other Golden Bear scores.

The NWOAL foes played to a 1-1 tie at halftime before Abby Smith (43’) and Macy Gerig (45’) scored early in the second half for the Indians as they pulled away for a 4-2 win. Gerig scored the last Wauseon (4-0-1, 1-0 in NWOAL) goal of the match in the 56th minute and Smith added three assists on the night.

The Bluestreaks scored the game’s lone goal in the first half and their defense was able to keep Swanton off the scoreboard to pick up a 1-0 win. Joelle Waidelich provided the Archbold offense by scoring at the 8:56 mark in the first half with an assist from Leah McQuade.