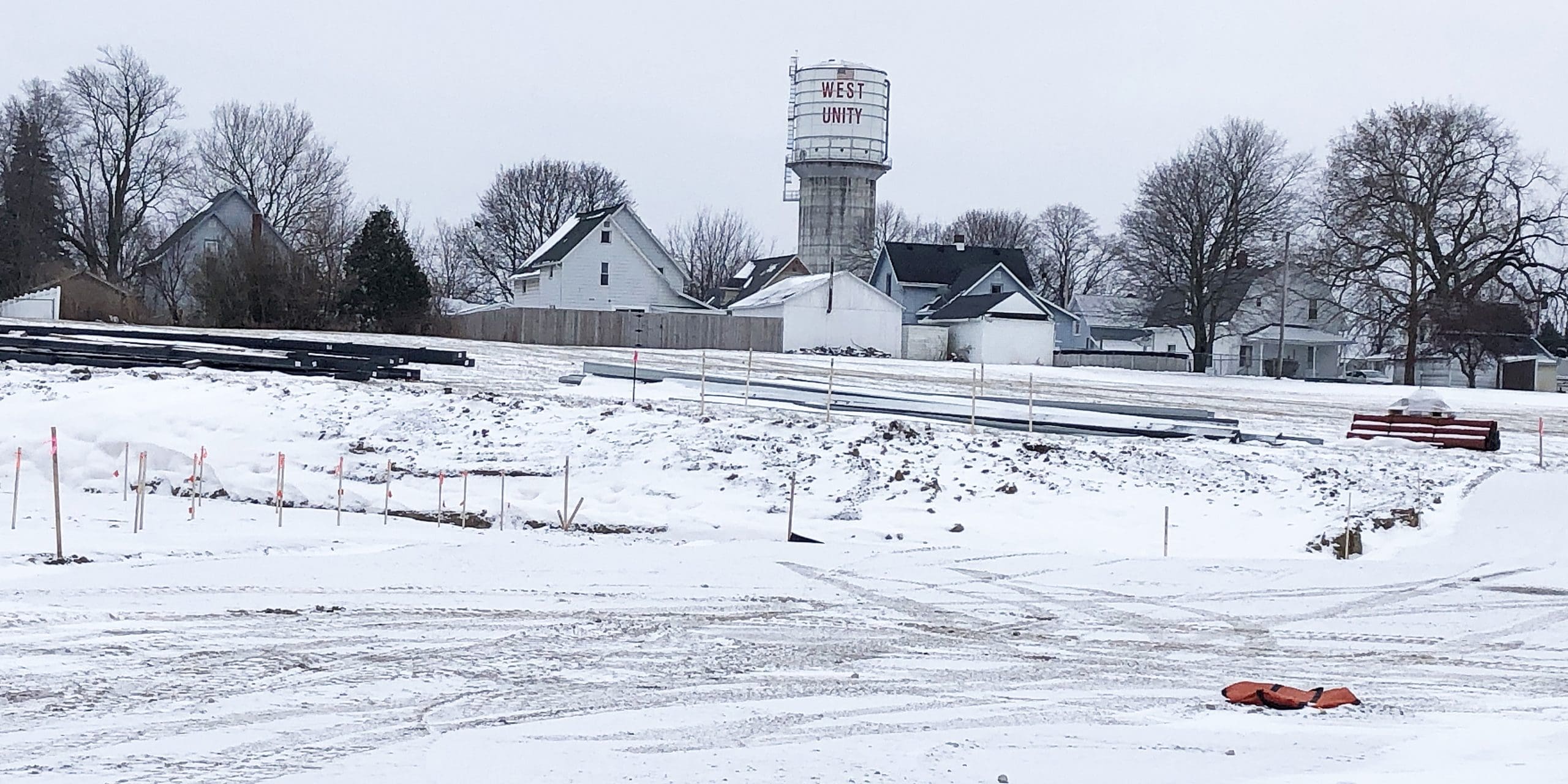 CONSTRUCTION SITE … Snow lies on the little bit that was accomplished at the old High School site in West Unity, toward the building of a merged Family Dollar/Dollar Tree store. Dollar Tree, Inc. owns Family Dollar now and is choosing to build joined stores where they would be helpful. Construction was halted until permits could arrive to make it all legal. Those permits are now in and the building should begin soon. (PHOTO BY REBECCA MILLER, STAFF)

A few years back, there were no chain stores in the smaller towns of Northwest Ohio and shoppers either paid a little more to support a local business or drove to the larger towns like Bryan, Wauseon or Defiance to do their shopping.

In the past ten years there has been a push toward each small town having a Dollar General store, and now the door has opened for Family Dollar/Dollar Tree as well.

M Kee Mansfield, who owned the property that used to be the home of the Millcreek-West Unity School, sold the land to Dollar Tree, Inc., which owns Family Dollar. The deal was closed for the seller and buyer in mid-November 2022.

The plan had been to close sooner and the construction company was planning to have the store completed in January of 2023.

There seemed to be some hiccup for closing between the buyer and seller, delaying the sale, but construction was moving ahead anyway.

Residents began to see construction equipment piled on the property in November, where the new store will stand.

The Village of West Unity realized that pre-construction labor had begun before the sale was completed and before the permits had been issued, so they had to go to the site and inform the construction crew that they would have to stop until permits were in hand.

Permits did begin to arrive in December with the building permit at the village office on December 5, 2022 and the sewer permit on December 15, 2022.

“Nothing has gone as planned,” Village Fiscal Officer Sarah Higdon said on December 27, 2022, but now they can get started.

She said that the village has not been given a new proposed completion date, but they do not feel it can be completed by the end of January as was initially planned.

Despite the mix up, she shared that they have good relations with the seller, the buyer and the construction company. “It was just delayed.”

As far thoughts on having a new store, Higdon said that some residents are happy to have something within walking distance of downtown.

Others feel that West Unity has Dollar General and doesn’t need another chain store, and some think that this will give West Unity people another place closer to home, to run for an item if the other store doesn’t have what they need or want.