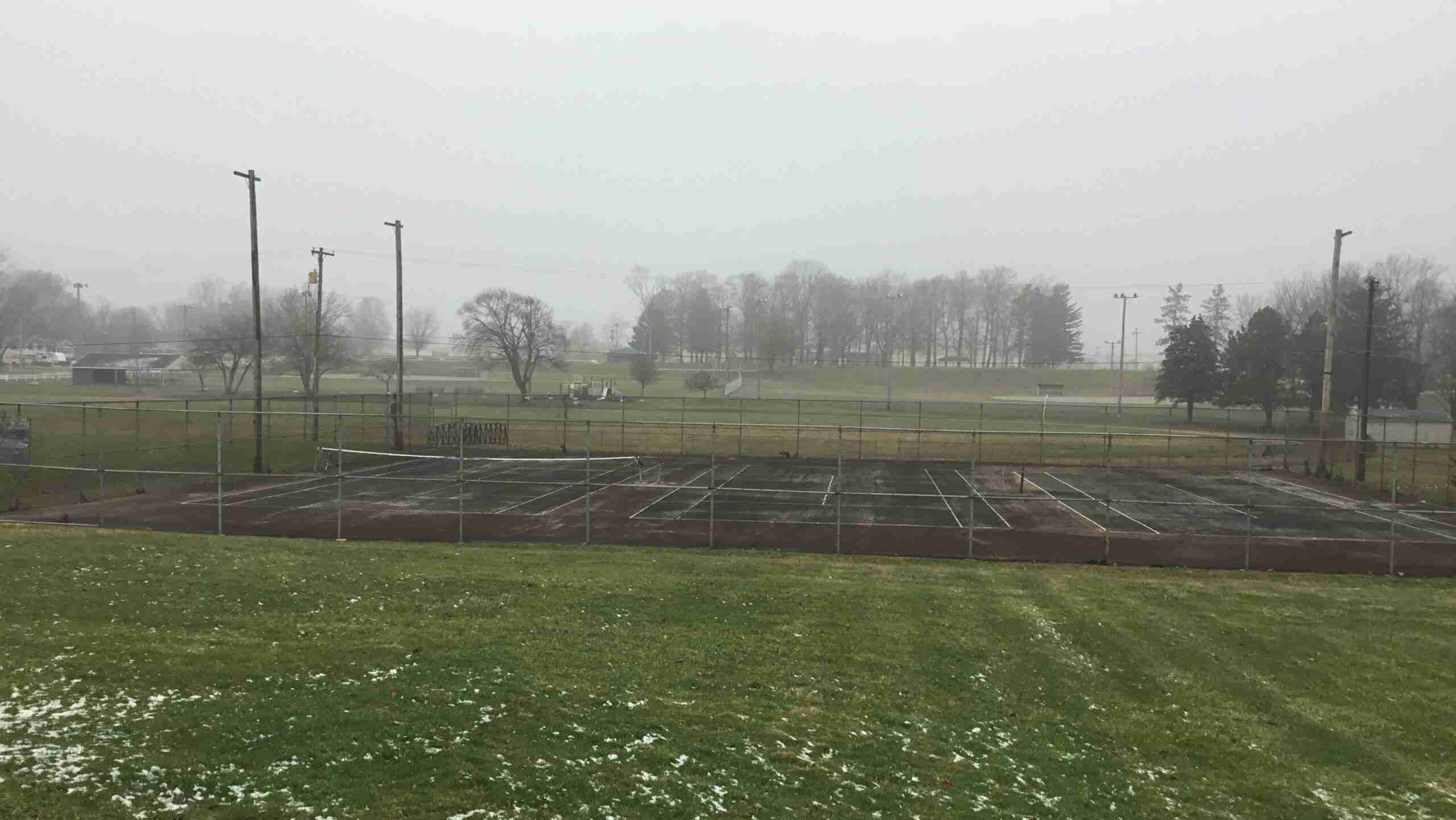 NEW LIFE … Looking down a slight hill at the Fayette Normal Memorial Park tennis courts, one can see they are in old condition and in need of an upgrade. American Legion Auxiliary and others are looking forward to bringing Pickleball to these courts in 2022. (PHOTO BY REBECCA MILLER)

Pickleball was created in 1965 as a family game when some folks were bored and wanted to have some fun together one afternoon.

They used ping pong paddles that day, and as the game has evolved, players now use paddles that are larger, but have the same affect. A ball, full of holes, that bounces is hit back and forth over a net at tennis height.

The game is less physical to play than tennis, and is enjoyable for all ages. Pickleball is played on a badminton size court and is much like a giant version of ping pong.

By 1990 it was being played in all fifty of the United States and in 2008 it was a part of the National Senior Games Association for the first time. In more recent years it has become a favorite for senior citizens who enjoy the physical activity at a level they can handle.

Just as Disc Golf Courses are spreading across the country, Pickleball Courts are becoming more popular. Kris Keiser, Secretary Treasurer of the Fayette American Legion Auxiliary (FALA), shared that a fundraiser is beginning, to get the tennis courts in Fayette refreshed and painted to accommodate both tennis and pickleball.

Fayette has three tennis courts as a part of their Normal Memorial Park, but they are not utilized much, Keiser said. During an Auxiliary meeting Keiser met a new member, Amy Beaverson, and discovered during their conversation that Beaverson is the Tennis Area Representative/Adult League Coordinator for USTA (United States Tennis Association) Northwestern Ohio.

As the two ladies talked, the idea for Pickleball came up and Ms. Beaverson said that she would love to help them get this sport brought to the area.

The idea was born and over the past year has grown to the point of being ready to start the Fund Raiser to make it happen. She has already accepted two nets which were donated for the new courts by the Shadow Valley Tennis Club in Sylvania.

The endeavor is spearheaded by the FALA, but also involves the American Legion and the “Connect Fayette Ministry” out of Fayette United Methodist Church.

Keiser presented the proposal to the Fayette Village Council in April of 2021 and was given their approval to go ahead with the fund raiser and the repairs and upgrade. They also offered to give some hands on help when the time comes.

Keiser said they want to get some teams formed, and host other towns to play, even forming an area Pickleball League.

“Our dream is to start a move toward a greater interest in Normal Memorial Park in Fayette,” Keiser said. “When the new school built the new sports complex, everything switched there, so the park is relatively not used. “

“Adult softball is phased out. It is being kept mowed and it is a nice place to rent and hold reunions, etc. in the shelter houses, but even those are not as used as they used to be for events.” The group hopes that Pickleball will be a boost to get folks enjoying the park more.

There are three courts at the park and they can be lined in different colors for Pickleball and Tennis. Most likely they will do at least two of them for pickle ball and one for tennis, or maybe all three for both.

A few donations have already been pledged, that amount to about a $1000, and the group needs to have at least $4500 to get the courts ready and to cover other expenses that come up.

Keiser is the contact person for the project, along with Jennifer McKinney representing the Legion and Pastor Jeff Bandy for the Methodist Church. The funds need to be raised by April 15, 2022 at the latest because they want to pay the contractor when he is free to get started.

Hopefully by May they will have things in line to offer lessons for adults and kids for tennis and pickle ball taught by Amy Beaverson.

The Auxiliary would welcome assistance from any individuals or organizations that would like to help, either financially or with hands on work when the time comes.