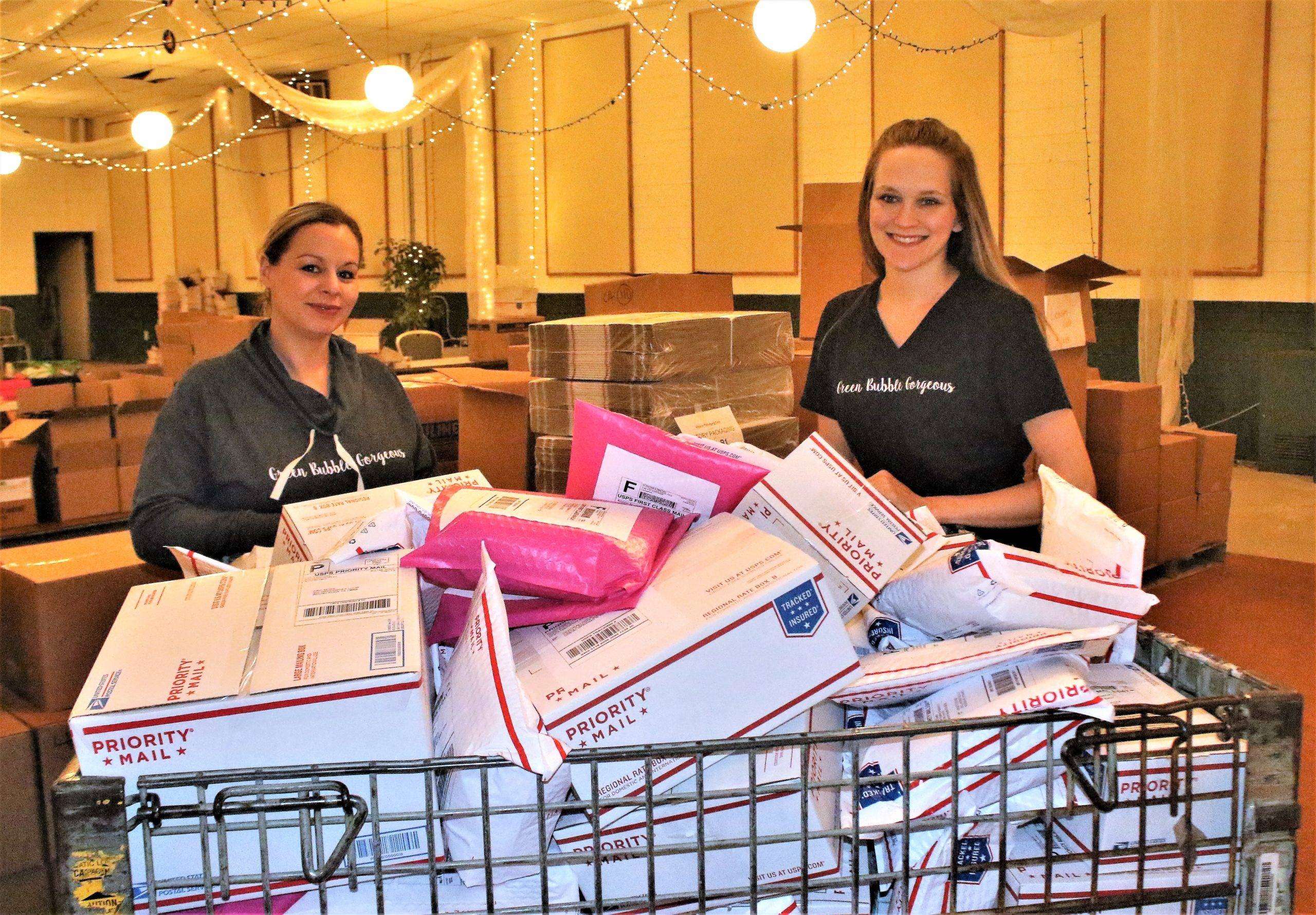 BOOMING BUSINESS … Krystal Szabo (left) owner of Green Bubble Gorgeous and Alyssa Walberg stand with a few of the 3,000 plus products sold in less than two days. (PHOTO BY BILL O’CONNELL, STAFF)

As a trained chef, Delta resident and DHS 2001 alumni Krystal Szabo has always been conscientious about the nutritional value of the ingredients she used in her cooking and baking, wanting to make her food products as healthful as possible as well as great tasting.

Approximately ten years ago, Krystal decided to transfer her culinary skills to the world of bath and body products and still maintain her philosophy of using ingredients that were not harmful to the human body. She decided to make these products using 95% natural ingredients and sell them in her own shop. Catering mainly to female clientele, Krystal soon opened a store in Grand Rapids, Ohio called Green Bubble Gorgeous (GBG), a name that came to her in a dream one night.

Since those early days, her products have developed a tremendous following and she now sells her wares on-line and at trade shows as well as in her shop. “We do what we do because we like to educate women about what’s in their body care products,” explained Krystal. “There are so many toxic chemicals out there that lead to cancer, infertility issues, Alzheimer’s, so we talk a lot to our customers.”

Two of the more common ingredients found in many cosmetic and body care products and have been linked to health concerns are parabens and phthalates, both of which, Krystal states, are never used in GBG products. Parabens, which have been used since the 1950’s, is a preservative that has been associated with breast cancer and phthalates are suspected of causing problems with the reproductive system.

However, like small businesses all across the country, when the COVID-19 pandemic hit, GBG sales plummeted because the shop had to close. Fortunately, at a recent trade show in Atlanta, sometime before the pandemic large gathering restrictions, Krystal and her assistant, Alyssa Walberg, were approached by representatives of ABC’s Good Morning America (GMA) about the possibility of featuring some of the GBG products during a broadcast which would be sold at a discount for one day only.

Several weeks later, Krystal received an email letting her know her products would be shown on May 18, 2020 during the 11:00 AM airing of “The View” and to expect an enormous flood of orders to follow which had to be shipped within 72 hours.

Very quickly, Krystal needed to find a large space to accommodate an assembly line type set up box the expected deluge of orders and to house the all the required inventory. Alyssa recommended the banquet hall at the Swanton Sports Center (SSC) which also had to close by orders of Ohio Governor Mike DeWine. Krystal and Alyssa had been bowling in leagues with their husbands at the SSC for a few years and had also used the banquet hall for several events so they were quite familiar with the layout. Once the owners of the SSC agreed, Krystal brought in about 15 friends and family to handle the packaging.

The GBG products were featured towards the end of the broadcast, close to the noon hour. Immediately following the show, orders began to pour in and by 1:00 PM they numbered just over 1,000.
The sale continued until the next day with orders exceeding all expectations at more than 3,000 coming in from Maine to Hawaii and every state in between. It took Krystal, Alyssa and the rest of the GBG crew until the end of the week to ship everything out which also required a parade of US Postal trucks going to and from the Sports Center all week long.

With the growing popularity of her GBG product line, Krystal is considering placing some of her products in small business retail shops in the area as well as keeping the Grand Rapids location which is open every Tuesday through Saturday from 10:00 AM to 5:00 PM. She has other business-oriented ideas that she is currently mentally developing and with her many talents, we may be seeing those soon.