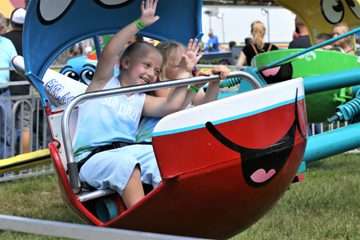 The Fulton County Fair is known for its delicious Fair food, agricultural and livestock competitions, arts & crafts, and a midway packed with games and rides.

Fair Board President Ron Rice says, “We are proud of how true we have stayed to our agricultural roots here in Fulton County, and it is part of what keeps us one of the top County Fairs in Ohio.”

Along with plenty of free entertainment, the Fulton County Fair is excited to announce the grandstand entertainment.

After more than four decades, 38 Special continues to bring their signature blast of Southern Rock to over 100 cities a year.

At each and every show, thousands of audience members are amazed by the explosive power of the band’s performance.

Their many Gold and Platinum album awards stand in testament to the endurance of a legendary powerhouse.

Night Ranger have earned widespread recognition that includes both multi-platinum and gold album status all while leaving their indelible mark on the music industry with a long list of best-selling albums (Dawn Patrol, Midnight Madness, 7 Wishes, Big Life and Man In Motion).

Their popularity is fueled by an impressive number of instantly recognizable hit singles and signature album tracks.

GRAMMY.com has hailed Allen as one of “5 Black Artists Rewriting Country Music” and he has amassed 1 billion career on-demand streams.

Tickets go on sale at 11 AM on July 6. Purchase tickets online at FultonCountyFair.com