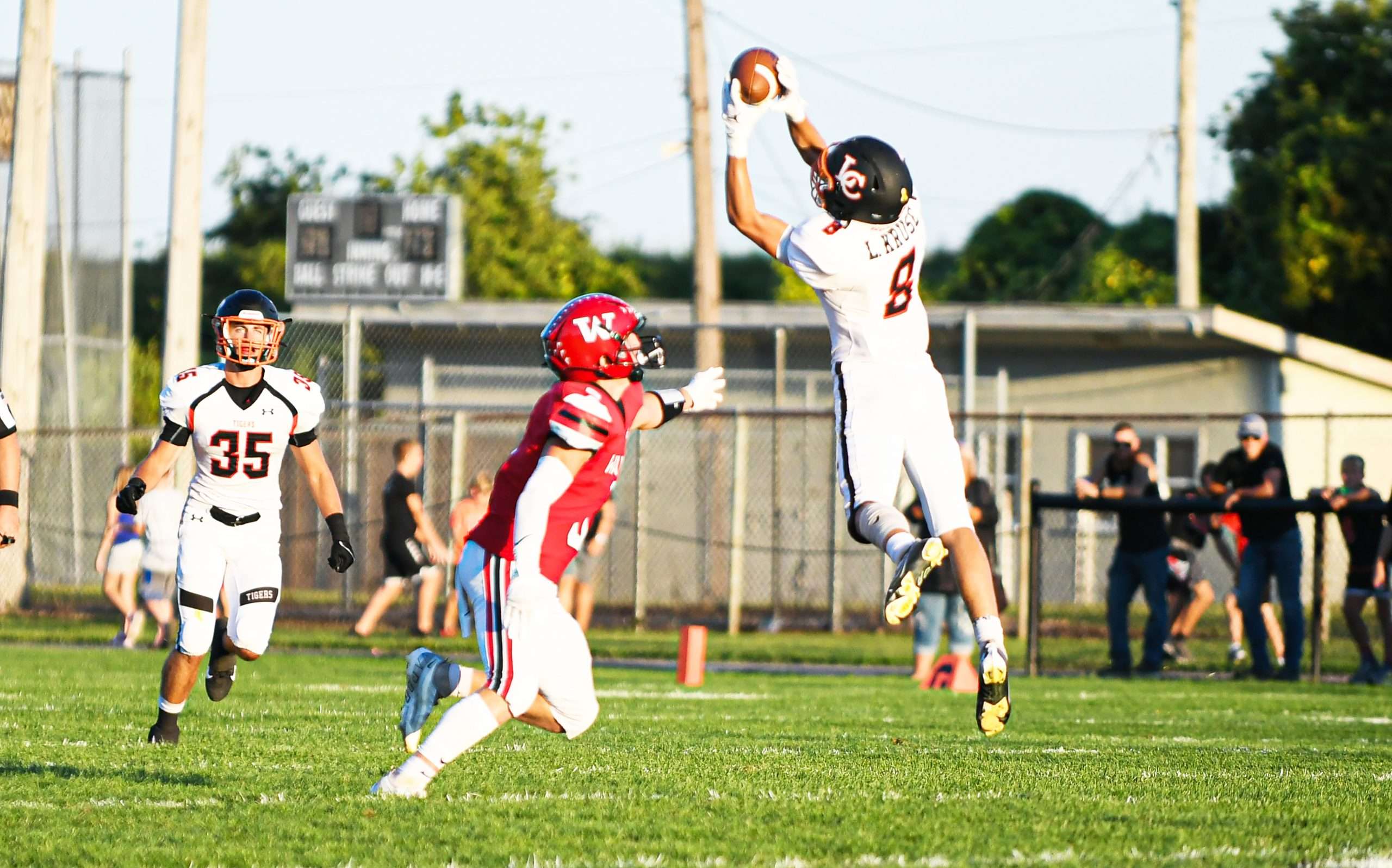 WAUSEON – Liberty Center put up 20 points in the opening quarter and Tigers defense forced four Wauseon turnovers as they rolled to 40-6 a win at Harmon Field.

The Tigers set the tone by taking the opening kickoff and going 54 yards on 16 plays ending with quarterback Zane Zeiter scoring from a yard out on second and goal to make it 7-0.

Wauseon’s turnover problems started on just their second play on offense as Elijah McLeod’s pass over the middle intended for Jude Armstrong was picked off by Landen Kruse and returned to the Wauseon 37-yard line.

One play later, Liberty Center was in the end zone again after a 37-yard run by Zeiter to make it 13-0 with 4:40 to go in the first quarter.

After a Wauseon punt, Liberty Center was on the move again as Matthew Orr ripped off a 48-yard scamper to give the Tigers a first and goal at the 10-yard line.

Two plays later, Orr punched it in from four yards out to increase the lead to 20-0 at the 1:05 mark of the opening stanza.

Following another Indian punt, it was a nine-play, 56-yard march by the Tigers resulting in a 10-yard TD run by Colten Kruse as the lead swelled to 26-0.

Wauseon finally found some offensive rhythm on their last possession of the first half as McLeod would hit Ethan Borton on a 26-yard play for the Indians initial first down of the game.

McLeod went 17 yards to Tyson Rodriguez and then 27 yards to Sam Smith following an offensive holding penalty to put the ball at the Tigers 27-yard line.

McLeod would find Borton and Rodriguez again sandwiched around a couple runs of his own before tossing a six-yard touchdown pass to Rodriguez with 0:24 left in the half to cut the deficit to 26-6.

The Indians started the second half with the ball looking to build on the momentum gained by the score just before halftime.

The second play of the half resulted in the Indians third turnover of the night as McLeod threw late over the middle and was intercepted by Landen Kruse to give the ball back to the Tigers at the Wauseon 47-yard line.

Liberty Center went to the work with the running game as Colten Kruse eventually scored from two yards out to cap off a seven-play drive, all runs, to make it 33-6 at the 8:21 mark of the third quarter.

Trey Parsons entered the game at quarterback for Wauseon on their next possession, which ended with a turnover on downs at their own 38-yard line.

Liberty Center would put their final touchdown of the night on the board with the passing game as Zeiter fired a 26-yard strike to Landen Kruse to make it 40-6 initiating the running clock for the remainder of the game.

The Tigers ended the night with 246 yards from the ground game led by Colten Kruse with 83 yards and Orr with 66 yards.