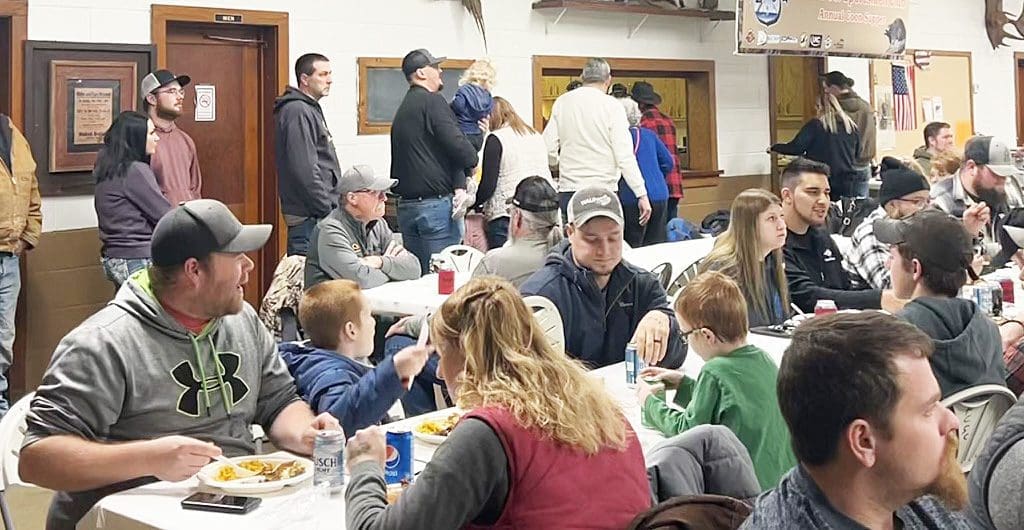 On Friday, January 20, cars lined both sides of the circle drive leading up to the Fulton County Sportsmen’s Club in Wauseon for their 75th Anniversary “Coon Supper.”

The annual Coon Supper, which originally started in 1943, is held every January. The highly anticipated event that draws people from Northwest Ohio, Southern Michigan, Northeast Indiana started years before the Fulton County Sportsmen’s Club was formed.

The Club evolved from the Fulton County Coon Hunters Association formed by raccoon hunters in the 1930s.

According to Greg Ruger, Coon Suppers were held in the early years at various places in the county including the former White City restaurant and Assumption, Ohio, prior to building the current Sportsman’s Clubhouse.

Tickets that were sold only at the door for $25 per person included an all you care to eat meal as well as drinks.

While some years have been more highly attended than others, Greg Ruger said they planned for around 200-250 guests.

In recent times, the menu has changed slightly, but still offers the perfect opportunity to try some “new” cuisine selections such as goose, beaver and elk.

Of course, there was also beef and pork for those who prefer a less adventurous taste.

The Club also served up its famous recipe meatloaf made at Pettisville Meats which is “usually a pretty good hit,” added Ruger.

Ruger also noted that the club members and a host of volunteers prepare the entire meal themselves.

In addition to the meal, the evening also offered plenty of raffles featuring items generously donated by many local businesses.

To find more information about the Fulton County Sportsmen’s Club, visit their website at: http://www.fultoncosportsmenclub.org.