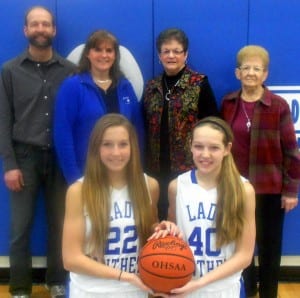 “It’s really cool. It’s like looking up into the stands and seeing my own cheering section and it means a lot to me that they’re there,” says Senior Stryker Girls Basketball player Emily Rupp. She’s not just talking about her parents. She’s talking about her grandmother and great-grandmother as well and she feels lucky that she’s part of the four generations from her mother’s side of the family present at almost every game. “A lot of kids aren’t even lucky enough to have grandparents who can still make it to the games so I feel really lucky that both my grandmother and great-grandmother can be here with us,” Emily explains.

It’s not just Emily they have come to watch play basketball; it’s her sister Audra as well. Audra, a freshman at Stryker Schools, plays for the JV Girls’ Basketball team. For everyone involved this means watching, not one, but two basketball games at every event. The girls’ grandmother, Sandy Sauder, jokes that both she and the girls’ great-grandmother, Lomeda Maust, now age 91, have become accustomed to a diet of walking tacos and pretzels as a result of being at the games for extended periods of time.

In all reality, however, basketball season might just be the easiest scheduling that the girls’ parents, Dallas and Michelle Rupp, as well as grandma and great-grandma encounter. As the time nears for spring sports to begin, both Emily and Audra will move on to compete in track, which is likely to have both girls competing at the same time in different events. During the fall the scheduling was even worse as Emily ran cross country and Audra played volleyball, often leaving the entire family to have to divide and conquer so that both sisters would have family with them. It was also during this time that the girls were involved in 4-H and the showing of animals at the Williams County Fair – another event that had all four generations in attendance.

Coming from rural Archbold, it is not a surprise that the family puts a great emphasis on supporting one another as that is what rural life and the farming community is often all about. The result of that support is evident in the performance of Emily and Audra Rupp both athletically and academically as both girls maintain high grades despite their busy life style.

It is support that both Sandy Sauder and Lodema Maust also try to show to the rest of their grandchildren and great grandchildren as well and both Sauder and Maust note that they enjoy watching the athletic events but mostly enjoy the time with their family and being involved.

Many of the other grandchildren and great-grandchildren are now reaching the age where they are preparing to graduate from college and one is soon getting married and Emily will soon be graduating from Stryker High School with hopes of going to college to complete a nursing degree. Audra is the youngest of the fourth generation, leaving grandmother Sandy to muse and wonder, “I’m not real sure what we’re going to do with ourselves here in another couple years.”