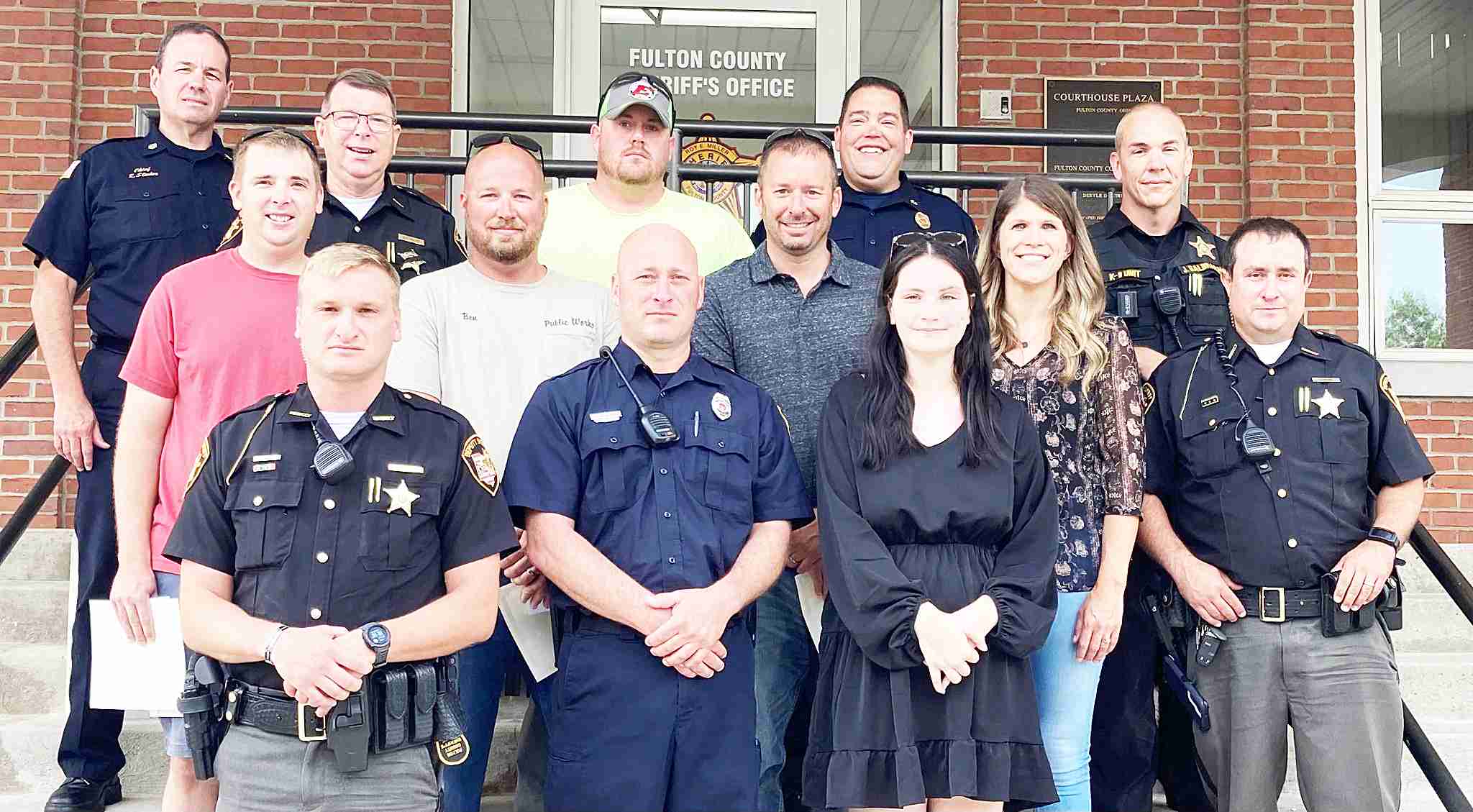 HONOR WHERE HONOR IS DUE … On August 2, 2022, this picture was taken of the people who found themselves suddenly knit together in a rescue situation on June 5, 2022. Wauseon Fire Chief Rick Sluder and Fulton County Sheriff Roy Miller, seen in the upper left corner of the photo, joined the group for the picture to show their pride and gratefulness for the excellent work done by both citizens and official first responders. In the back row after Miller are Mike Riegsecker, Wauseon Assistant Fire Chief Phil Kessler and Sheriff’s Deputy Justin Galbraith. The middle row, left to right, has Tyler Bernath, Ben Johnston, Jason Wanemacher, Katie Wanemacher and Deputy Brian Marvin. In the front row are Deputy Craig Bailey, Paramedic Jed Bowers, and McKayla Parker.

McKayla Parker was on her way to work on Sunday, June 5, 2022 when she was involved in a single vehicle accident, hitting a tree. The car slammed into the tree on Fulton County Rd. 19, with the driver’s side toward the tree, causing extensive injuries to Ms. Parker.

Tyler Bernath, along with his wife and children were on their way to church in Napoleon that morning when they came upon the accident.

It must have just happened, Bernath said in a phone interview, as they were the first car to see it and the engine was still running.

Bernath parked quite a way off to protect his family and ran to the car, asking the driver to turn off the engine. There was no response from her. Eventually the engine turned off and caught fire.

Other cars began to stop and as the front of the vehicle caught on fire, the group which was gathered around, began looking for a way to help. Katie and Jason Wanemacher, who had also stopped, knew the family who live in the home near the place of the accident and even though they were not home at the time, the group found a spigot with a hose that did not reach the car, some buckets and watering cans.

They quickly formed a “bucket brigade” to pour water on the fire. Michael Riegsecker and Ben Johnston were others who stopped to help.

As they all joined in to fight the fire, Sheriff’s Deputy Justin Galbraith and Assistant Fire Chief Phil Kessler arrived around the same time and began to add fire extinguishers to the battle against the fire.

When the tanker truck arrived with a hose, the fire was extinguished, and Paramedic Jed Bowers and sheriff’s deputies quickly got the young lady out of her car. She was flown by air ambulance, with serious injuries.

Sheriff’s Deputies, along with fire and EMS personnel as well as the citizens who arrived first, all responded quickly to save McKayla from the car.

In a Facebook post on the Fulton County Sheriff’s page, it stated on August 2, “When Deputies arrived, there was heavy smoke and flames coming from the engine compartment and the victim still trapped inside the vehicle.’

“The deputy also noted a line of citizens that led towards a house. The citizens had formed this line to carry water to the vehicle in an attempt to put the fire out, which kept reigniting.”

McKayla’s employer shared on Facebook that the buckets and water available to the citizens was “truly a God thing.”

‘The place where it happened, they were on vacation and had set out water buckets for the neighbors to water their plants. Those buckets wouldn’t have been there any other time. God also put the perfect people in the right place at the right time!”

Marlin and Marcine Klopfenstein, home owners, shared on the phone that they are blessed that the citizens were able to find what was needed to keep the fire at bay and save this young girl’s life. “We feel like it was definitely a God thing,” Marcine agreed.

McKayla is recuperating from her extensive injuries and if one reads through the many comments on Facebook, many are praying for her and rejoicing that she was rescued that day.

This story came to light when the Fulton County Sheriff’s Department posted that they are recognizing Michael Riegsecker, Jason Wanemacher, Katie Wanemacher, Ben Johnston and Tyler Bernath with Certificates of Appreciation for their actions.

They are also giving Deputies Justin Galbraith, Brian Marvin and Craig Bailey, Lifesaving Awards to be worn on their uniforms.

We all agree with the Sheriff’s Department in saying, “We are very grateful that McKayla is making a great recovery.”