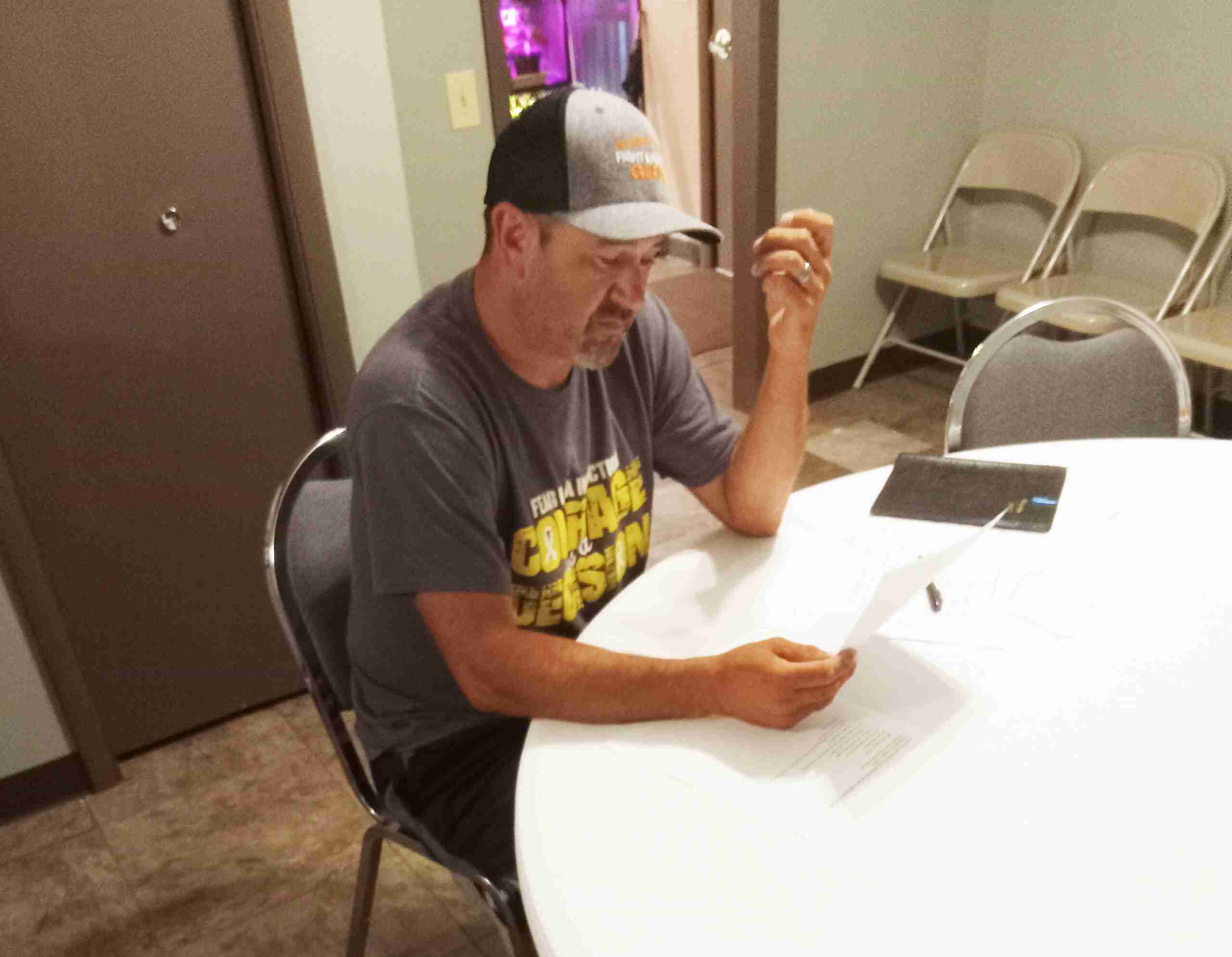 POOL REPORT … Nick Ramos stated that they have had several good weeks with the Montpelier pool. (PHOTO BY DANIEL COOLEY, STAFF)

The Montpelier Parks and Recreation Board meeting of August 3rd began with roll call. Board members in attendance were Angela Hillard, Matt Reid, Darold Moore, Brent Saneholtz and Nick Ramos.

First, the board approved the meeting minutes from June 1st.

Nick Ramos then gave the report for both Storrer and Founders Parks, as well as the pool update. Ramos stated that they have had several good weeks at the pool, with no major issues.

A drain cover was replaced at the baby pool and VandeVorde Heating and Air repaired the restroom toilets. Also, the concrete at the splashpad was power washed in order to remove the algae that had appeared.

Water aerobics has been available on Tuesday and Thursday nights from 8-9 p.m. and 25 individuals have been participating. The football and volleyball teams have requested using the pool for a few workouts.

New grates have been cut and installed on the pool gutters. Thanks goes out to Buffy Beck and Kyle Gearhart for helping with the cutting. Guys from the water department also helped. Also, Slide-Renu said that they will be out this week to get the slide done.

In the parks report, weeding and mowing has been done at both Storrer and Founders parks. At Storrer, the basketball poles and backboards have been put up.

The fence that will be installed will now be placed on top of the block. The terraces have been planted and fenced off and the snow fence has been taken down.

The drain in the grove that Mohre Industries was installing was approved by Mr. Rockey, village engineers and Ramos, but the nearby sidewalks will likely have to be moved.

The contractors have seeded and put straw down and trees have been trimmed in the parks.

Carlton and Laura Gray have donated wood mulch to Main Street Park, which Ramos and Ethan then spread around the trees.\

In getting ready for Bean Days, Founders Park was seeded, fertilized, and covered. While the grass weathered Bean Days well, it will have to be seeded again in the fall.

Two parking lots along Platt Street have begun to be sealed and striped and should be done by the end of the week.

In the June report, the park website and Facebook has been updated. The last of the concession supplies for the pool concession stand have been ordered.

Registration forms have been put into the roster for each child participating in the recreation programs. Concussion and sudden cardiac arrest forms have been collected.

There are 117 summer fun camp registrations and nine kids participated in a junior gardener’s program. A total of 115 kids took part in the tie dye program.

Eighty-four kids have been involved in Tot Ball. Teams have been set up, rosters typed, coach manuals created, which included rules, emergency medical forms and code of conduct forms have been prepared.

Concussion paperwork was given to new coaches and new coaches were trained, held coach’s meetings, ordered uniforms, distributed equipment, and assembled first aid kits for coaches. Thank you to the recreation staff for helping to set up coach’s folders.

An outdoor movie was shown and 50 people turned out. The rec staff assembled 200 goodie bags for Bean Days.

The health department spent two days talking to the children about health and nutrition. The breakfast bags have gone over well.

Installed a fountain in the alley, planted gardens, mulched, and weeded. Got touchup paint kit for the train on the splashpad, took pavilion and pool reservations, made reservation signs, and sent out appropriate paperwork.

Attended supervisor meetings and printed reports for Park Board and Friends of the Park meetings.

In the July report, the last concession supplies were ordered for the pool concession stand and sent out bills to the leagues for team concession charges.

Painting has been done in the chlorine room, doors of the concession restrooms and benches and tables downtown, by the recreation staff. Also, perennials and bushes have been trimmed back around the pool area.

Collected concussion forms and sudden cardiac arrest forms for all children participating in park programs. A total of 156 signed up for soccer and had to change some team names to have enough shirts.

Distributed Tot Ball hats and shirts, helped with pictures and distributed pictures to coaches. Made sure that all coaches completed the state mandated concussion training. Ordered medals for 85 Tot Ball players.

Had 55 kids participating in Soil and Water Conservation Pollinator Workshop.

Despite rain, a lot of kids stayed for face painting and balloons, plus 52 scavenger sheets were given out. Because of popularity of the face painting, there are plans to expand the activities next year.

Will investigate a canopy with sidewalls for the stage. The mermaids were a big hit and 127 goody bags were passed out. About 200 people turned out at the pool, until it had to be closed early because of someone getting sick in the pool.

A movie was shown and 70 people turned out and there were four volleyball teams and four 3 on 3 basketball teams.

Thirty people registered for the Iron Horse River Trail Mountain Bike run, one band played on Founder’s Stage until the rain set in and one band played inside Drop Tine. Despite the rain, Gordon felt that the Bean Days went well.

In board member comments, Reid is looking into a disc golf course. Gordon suggested that he explore prices and then see what Friends of the Park would like to do.

Saneholtz will check on more sidewalks, where they want them and what the cost would be.