Hillsdale College Professor Breaks Down The Economy For Archbold Rotarians 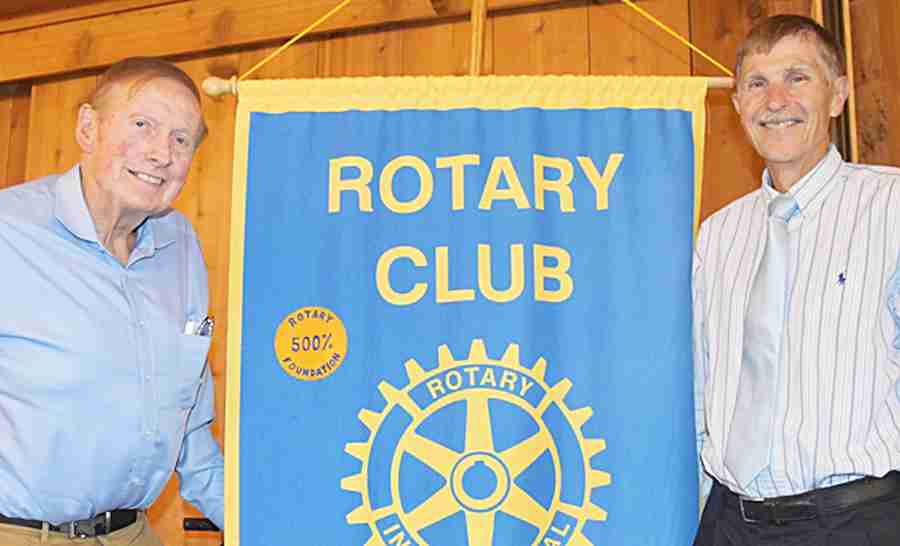 ECONOMY TALK … Dr. Gary Wolfram (right), a professor of economics and public policy and political economy at Hillsdale College, delivered a presentation on “the state of the economy” at Wednesday’s Rotary meeting. Currently, the question is whether the United States is in or about to enter a recession. The program was arranged by Rotarian Dan McQuade.

Dr. Gary Wolfram from Hillsdale College explained that a several economic indicators (such as the nation’s gross domestic product, unemployment, inflation, consumer spending and more) are used by economists to determine the health of the economy. Currently, the question is whether the United States is in or about to enter a recession.

However, Dr. Wolfram said that this time around it just isn’t that simple to say as indicators that would normally be moving in the same direction during a recession are moving in different ways.

On the other hand, gross domestic product (the measure of how much goods the country is producing) has fallen for two consecutive quarters and inflation is at historic highs.

He explained that one of the reasons that inflation is so high relates to COVID when the Federal Reserve propped up the US economy by buying US bonds and removed the reserve requirements that banks are required to maintain.

Initially, the banks built up huge cash reserves — far beyond what they had been required to maintain — but as they could make more money off those funds by making loans, the money supply increased along with inflation.

Dr. Wolfram noted that inflation was also driven by supply chain bottle necks that occurred during COVID and the war in Ukraine.

Ultimately, the recession question will be answered by economists well after an actual recession has started because the determination is only made after months of various data have been.

He said it is done more for an historical economic record than a contemporary evaluation of the health of the economy. Rather, questions about the current economy are more personal.

They are based on jobs, wages or income and the cost of living, and the impact that those factors have on families, he explained.

Personally, he said he expects inflation to begin to slow and the Federal Reserve to continue to make smaller, more measured increases in the prime interest rate than their last two increases.

Consequently, that will encourage banks to grow their reserves, restrict lending and slow inflationary pressures.

Dr. Wolfram has been on the Hillsdale College staff since 1989 and his most recent book, The Capitalist Manifesto, explains how an understanding of basic economics can be used to predict geopolitical events.