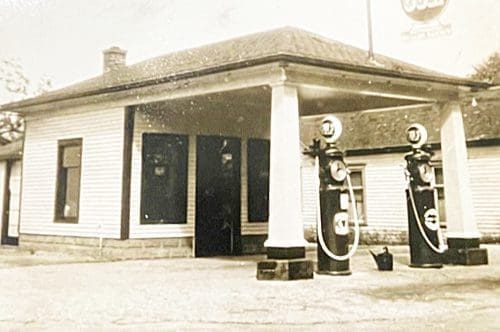 ORIGINAL SITE … Pictured here is the original Lyons Oil Company before the company moved to its present location. (PHOTO PROVIDED)

Doyle Welding in Lyons has said its goodbyes and shut its doors. The business got its start in 1938 as Lyons Oil Company.

That is a total of 84 years in operation. Founded by Forest Gillespie and Roy Toms, the business started out as a gas station and fuel delivery service.

The original building everything started out in is located where the State Bank and Trust stands today.

In 1955 with Forest’s death, Doyle Gillespie and Roy Gephart bought the gas station and renamed the business Lyons Oil Garage.

In 1968 Doyle bought out the share of business owned by Roy, thereby becoming the sole owner.

It was then that the name was changed to Doyle Welding. In 1976 Doyle Welding was moved to where it currently resides today.

Many customers today will know the owner and operator of Doyle Welding as Steve Gillespie.

Steve is the son of Doyle, and in 1994 took over for his father after buying the business.

Together, the father and son continued to work together until Doyle’s Death in 2006.

Now in 2022, the business has been sold. The property is now owned by Jason Snyder for Three J’s Trucking.

For Steve Gillespie, the future will hold a bit of travel and golf during his retirement.

Of course, even with retirement and golf, moving on from the past has its challenges.

“Being the third generation and being the last one after 84 years, it’s kind of hard to talk about.”

“I’ve done a little bit of everything. I started working at the shop when I was 13 and I have been there for 54 years now.”

“I was on the fire department for 38 years and was a township trustee for 30 years. I am looking forward to retirement though and playing golf with my wife,” said Steve Gillespie.

With the shop now gone, a sizeable void is left within the community. The business provided a valuable service to both customers around a large area, and to residents in the village.

“Steve would always be willing to help people out. He would fix broken bikes for kids and would fix wheel chairs for the elderly all for free.”

“Whenever there was a fire call, he would be ready to. If it was during the day when he was at work, he would close the shop down and go.”

“People knew that if they came and he was gone, he was out for that and would be back. It was a small town run business and it is going to resonate through the farming community,” said Sharon Gillespie.

With the kind of work done at Doyle Welding no longer accessible, many people will need to find a place to go for a range of services.

Steve explained that many people have voiced concerns including that they are not sure what they are going to do now that he is gone.

One thing is for sure though, that Doyle Welding will be greatly missed by the community.

Congratulations on your retirement Steve Gillespie, and good luck for everything that comes next.