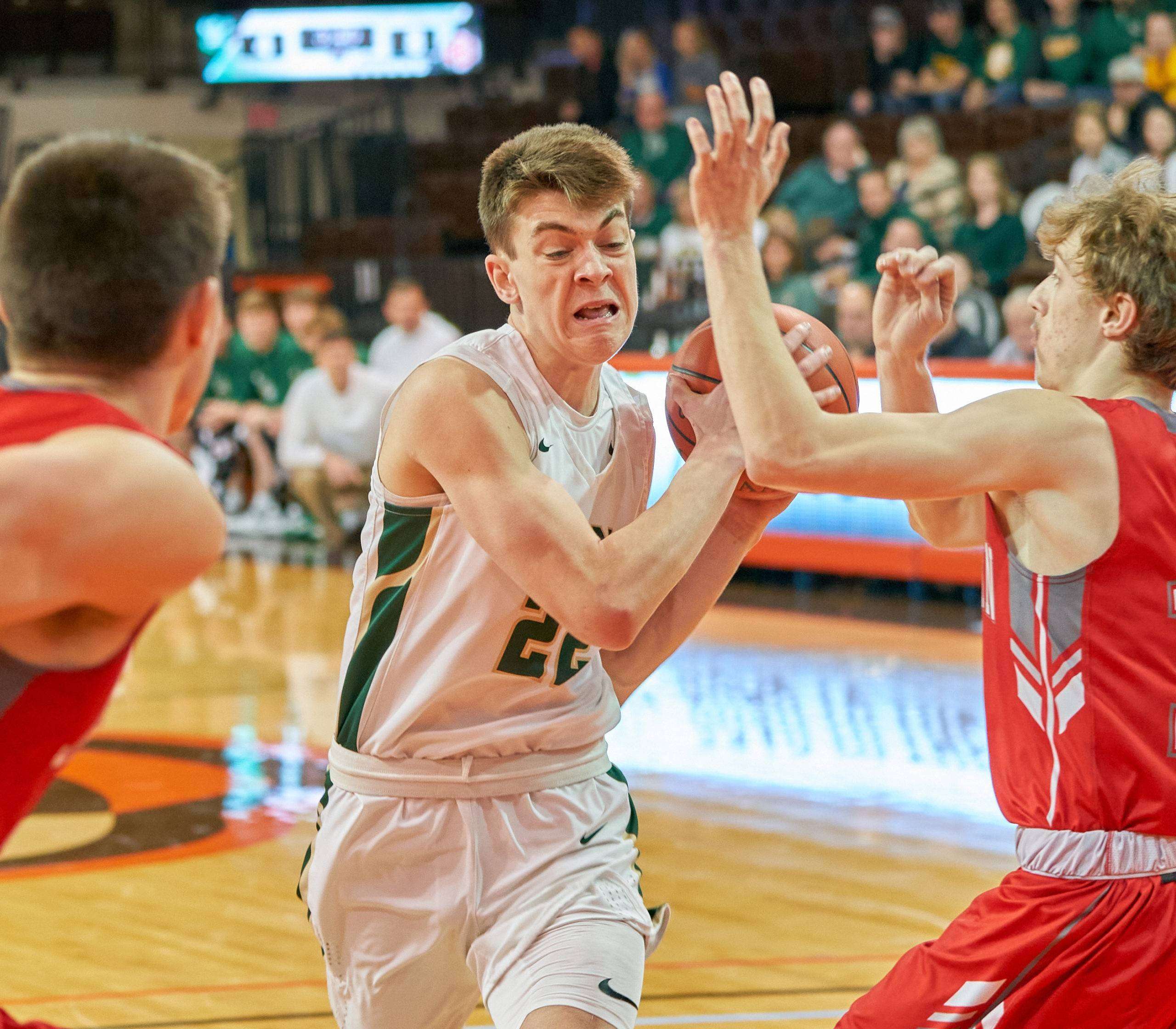 BOWLING GREEN—On March 11th the Evergreen Vikings played their biggest game of the season in front of their smallest crowd of the season. Due to spectator limits put in place by the OHSAA to combat the COVID-19 outbreak, only an estimated 100 people were in attendance for the Division III Regional Semifinal between Evergreen and Johnstown-Monroe at the Stroh Center.

Evergreen used solid shooting and a decided advantage on the boards to pull out a 64-54 win and move on to the regional finals for the first time in school history.

After Johnstown took an 11-7 lead in the opening quarter, Evergreen closed with two buckets from Mason Loeffler and a field goal from Nate Brighton as they took a 13-11 going to the second quarter.

Brighton took over on offense for the Vikings in the second quarter by hitting two triples and a two-point field goal to score their first eight points of the quarter as they built their advantage to 21-17.

Brighton added another three-pointer later in the quarter to finish with 11 points in the period and 15 in the half to help Evergreen stretch their lead to 28-21 at halftime.

The Loeffler brothers began to assert themselves in the third quarter beginning with Ethan starting the quarter with a field goal and then Mason was 2/2 at the line to make it 32-23. The brothers accounted for all ten Evergreen points in the third as they held a 38-33 lead moving to the final eight minutes.

The Johnnies would start the final stanza by drawing to within one at 38-37 with 6:15 to go after two field goals combined with an Evergreen turnover.

Mason Loeffler answered for Evergreen with a fade away jumper in the lane and after two free throws by Brighton it was 42-39.

After a Johnstown triple, Etue responded with a conventional three-point play on a nice pass from Mason Loeffler to make it 55-43 in favor Evergreen.

Evergreen would go 6/6 from the foul line in the last minute and 12/13 in the fourth quarter to close out the win. Mason Leffler led the Evergreen (25-1) attack with a game high 29 points and Brighton added 18 points and 8 rebounds.

The Vikings controlled the boards by outrebounding the Johnnies 28-19 while shooting 22/40 from the field and 17/20 at the charity stripe on the night.

Now the Evergreen Vikings sit and wait with the rest of the winter and spring sports athletes in Ohio. For the Vikes, will their dream season come to an end or will they have the chance to face Ottawa-Glandorf (25-1) in the Division III Regional Finals.

The next three weeks will tell the story.