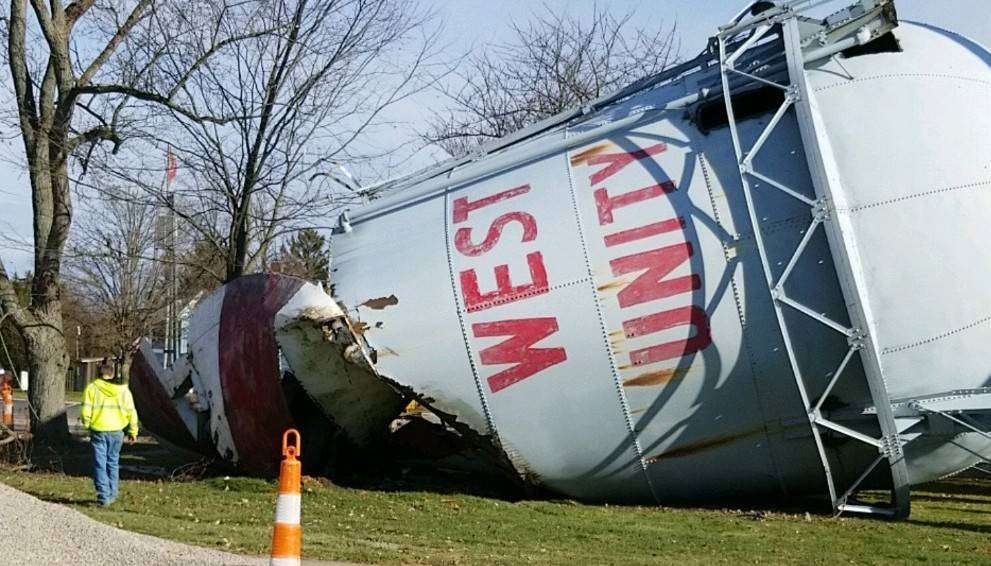 AND WE ALL FALL DOWN! … On December 5, 2019, the West Unity Water Tower which had been present in the village for the past 82 years, came tumbling down, to be replace in 2020 by a much bigger tower which will bring better water pressure to the residents of the town. (PHOTO PROVIDED)

For the past 82 years, the water tower in West Unity has been visible to all, and will be again by Autumn of 2020. In February of 1938, Carl Mitchel of Carey, Ohio was awarded the contract for the construction of the waterworks system in West Unity, according to a “Remember When?” article which was found in the Sesquicentennial Review for West Unity, published in the June 19, 1984 issue of the Advance Reporter.

The article continues, “His bid was $56,899.80. C.L. Bierly and Son, of LaFayette, Indiana were the low bidders, at $3,791.38 for sinking the well and construction of the pump house. These men were allowed 40 hours a week at the rate of 50 cents per hour. Mr. Mitchel stated the pipe alone would take 10 freight cars loaded with supplies. The job will take six miles of pipe and 11 tons of lead.

He expects to sink the cement foundation for the water tower at once as they must set for 30 days before the work of construction of the tower can begin. The foundation blocks are to be 6 by 9 feet and 4 of them will support the 50 ton tower.

The men to be hired will be men signed under W.P.A. (Works Progress Association, an employment program designed by President Franklin D. Roosevelt in 1935), although others can be employed. The project is expected to be completed by the middle of September (1938). 217 signed up” for employment.

Things have changed since the year when that water tower went up. Having been there for 82 years, it was in definite need of replacement. The village council voted about two years ago to replace it and the process began.

A subcontractor out of San Antonio, Texas won the bid to take down the old one and it was dropped on Thursday, December 5, 2019. “It took two days to drop it and cut it up to take away,” Village Administrator Josh Fritsch said.

The pipes underground around the village are now all ductile iron and plastic, and there are many more miles of them than in the 1930’s. Wastewater Treatment Plant director, Randy Mahlman explained that all the old pipes have been capped off and are no longer in use.

The new tower will be going up in exactly the same spot, at 202 East Church Street. The old concrete will be taken out, by a subcontractor, and replaced by a single slab of concrete. The building of the new tower, being done by Maguire Iron, will start in March or April of 2020, depending on the weather and it will be done sometime in the fall of 2020. It will be completely of steel and will have a 100,000 gallon tank.

This new tower will be Spheroid, or round, like the one in Montpelier and the one at Harrison Lake. According to Mahlman and Fritsch, the new one will allow the water pressure to be increased for the village. “The maximum water level of the new water tower is 941 feet above sea level, and the base of the cone, or the bottom of the new tank will be 22 feet in diameter,” Mahlman explained.

The tower, along with miscellaneous water lines, costs just under a million dollars. The village applied for and received a Grant for $402,500 from OPWC (Ohio Public Works Commission) as well as a $10,000 loan from them. Ohio EPA (Environmental Protection Agency) loaned the rest of it to the village, in the amount of $746,700.

At this point in time the plan is set for it to be painted white with West Unity in red lettering. The tower will be painted after it is constructed and raised, and that will be the final part of the project.