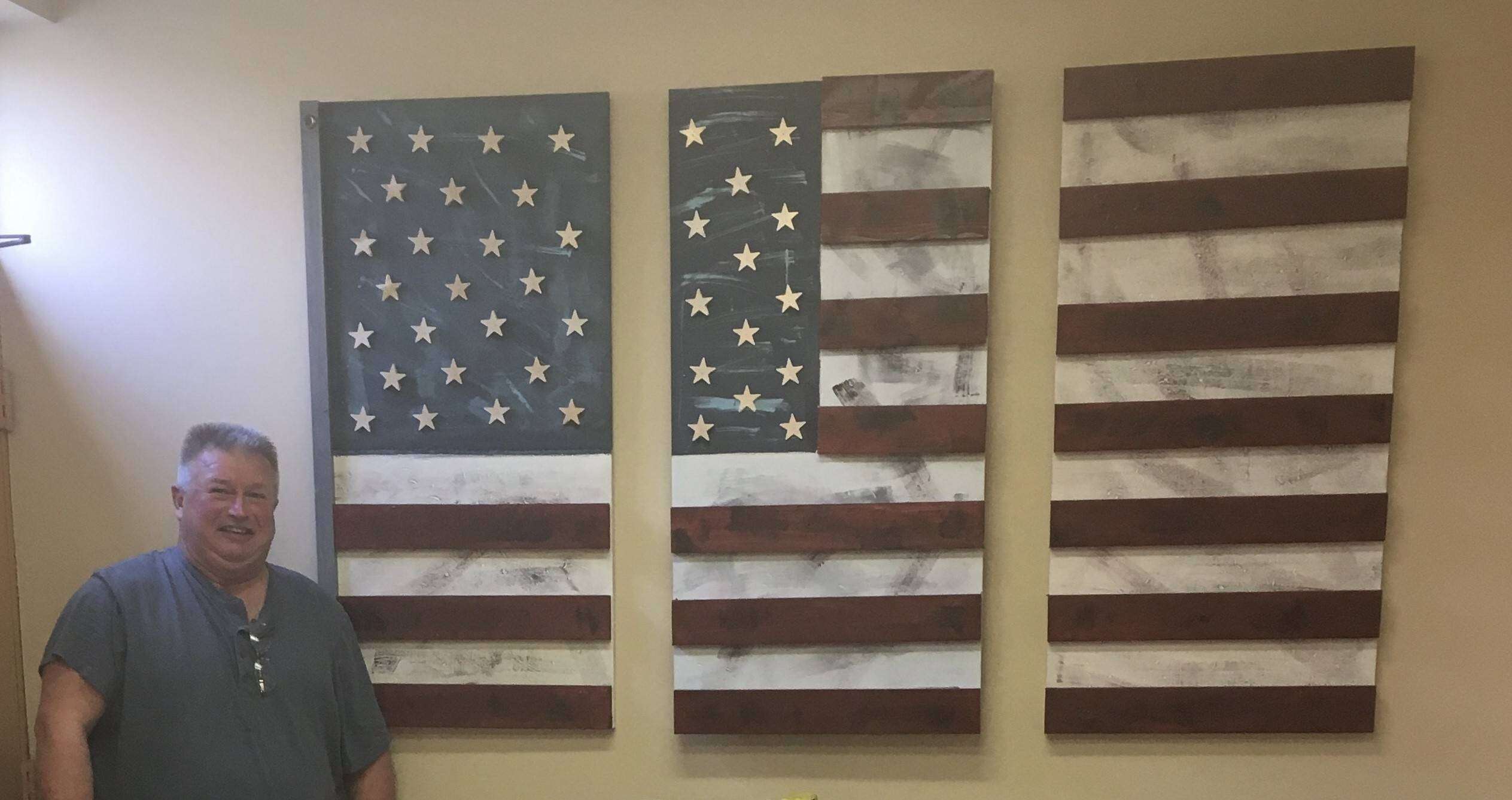 STIRIZ LOVED HIS JOB … This display which was on the wall of his office is just one example of how he does everything with excellence. Scott Stiriz will be retiring at the end of December 2019 and is seen here with his friendly smile, in the office where he has listened to many a hurting soul. (PHOTO BY REBECCA MILLER, STAFF)

A Retirement Open House, honoring Scott Stiriz of Wauseon, will be held at the VFW on Ottokee St., on Saturday, December 28, 2019 from 2-4 p.m. Despite the fact that Stiriz really didn’t want any recognition, one of his long time appreciators, Maryann Reimund, felt that it would just be wrong to let that happen.

“Scott has been so much more than a cemetery caretaker,” Reiman said. “After all that this man has given not only of himself, but of his family as well, you don’t just walk away. We would like the community and surrounding areas to come out and wish him well on his well deserved retirement.”

Stiriz started helping to take care of Wauseon Union Cemetery on State Rt. 2, west of Wauseon, in 1984, while he was going to college. “It was supposed to be a summer job,” Stiriz recalled. “Jim Crawford was the superintendent at the time and trained me. I worked part time while I was attending University of Toledo and living at home.”

Stiriz is a lifelong Wauseon resident, born at Detweiler Hospital and spending all of his school years in the Wauseon School District.

About a year an a half after he began at the Cemetery, Crawford retired and Stiriz took over as superintendent. He and his wife of 21 years, LuAnn, were dating at the time and he proposed to her at the top of the hill in the cemetery on a picnic blanket with a spaghetti dinner and roses. They were married in April of 1998 and she and their children have all been very involved in the care of the cemetery with this hard working man who never does anything halfway.

“I had always been taught to work hard and keep your mouth shut,” Stiriz shared concerning his need to be all in or not at all. “I wanted the cemetery to look like every weekend was Memorial Day Weekend and since I have what I call an addictive personality, that’s how I have kept it,” he added.

LuAnn and Maryann chimed in that he always does above and beyond what is needed or expected, in everything that he does. It has served him well, as a Wauseon resident who has traveled much and visited cemeteries in many different places, told him recently in a note, that Wauseon Union Cemetery is the best cared for cemetery that she has ever seen.

Throughout the years Stiriz has made himself available to mourners, with a listening ear in his office, with thoughtfulness concerning old floral arrangements and even by raising funds quickly for families who could not afford a plot.

One time some Veteran Flag holders were stolen and from that point on he drilled holes in the memorials to hold the flags so they can no longer be taken. “It used to be that the Funeral Homes took care of placing the Veteran Flag holders, but over the years LuAnn and I have sort of taken over that responsibility,” he explained.

One job at the cemetery in which the entire family has helped, has been picking up fallen branches after storms or windy days. “One time I remember after a storm, when Mayor Matheny came by after our family had already gotten up early and cleaned up the cemetery. He thought that we hadn’t gotten hit very badly and was surprised, but didn’t realize it had been a big mess when we got there,” Stiriz said.

One aspect of the job which he has really enjoyed is doing the trimming, as he can take time to stop and pick things up, and make sure it is perfect. He knows every single name in the graveyard and can tell anyone where their loved one was buried. “I really am old school,” Stiriz shared.

“George Edger, from the funeral home, knew everyone. He was very old school and I think that is where I learned to be like that, to care about the people and details. I want to take care of the people and the place.” His favorite thing about his job all these years is that it is less than a minute away from his home and that everyday he has been able to go home and eat lunch with his wife, LuAnn.
Stiriz has worked seven days a week for the past thirty five years, watering and landscaping, shoveling and plowing, clearing and cleaning. He has been on salary so he “pretty much was there every day.”

Winter is the hardest of course, he explained, with the snow and cold making everything take twice as long. He had to plow constantly and when new graves needed to be dug, he ground can be frozen up to 15 inches deep, making that a very hard job.

Before a funeral, Scott has been in the habit of cleaning the whole area off before the vault people arrive, as well as plowing an area for the military color guard to stand.

Laughingly he shared that the vault people said they sure hope he has told the young man replacing him that they still want that done. Reimund added that Stiriz also played a big part in getting the Columbarium, for interment of ashes, to be placed at this particular cemetery. Many people have expressed gratitude for having it there.

Stiriz is very involved in the community as well, saying that he loves Wauseon, can’t imagine living anywhere else and is so glad that he grew up there and that they raised their family there. Other involvements have been in Wauseon Exchange Club, Athletic Boosters, ADAMHS Board, Wauseon Homecoming Committee and presently as a City Council member.

Reimund added, concerning Stiriz, “What most people don’t know is that Scott has served this community seven days a week, twenty four hours a day! He will be missed beyond words!”

Quoting an article written by Tammy Allison and published in The Village Reporter in August of 2016, “ He is a reminder that good people are out there making a difference quietly, unnoticed as unsung heroes in our communities. In the quietest places of solitude in Wauseon, Scott ensures beauty can be found not only to please the eye but to provide comfort and solitude in the most difficult of moments. He truly is an unsung hero.”

Rebecca may be reached at publisher@thevillagereporter.com