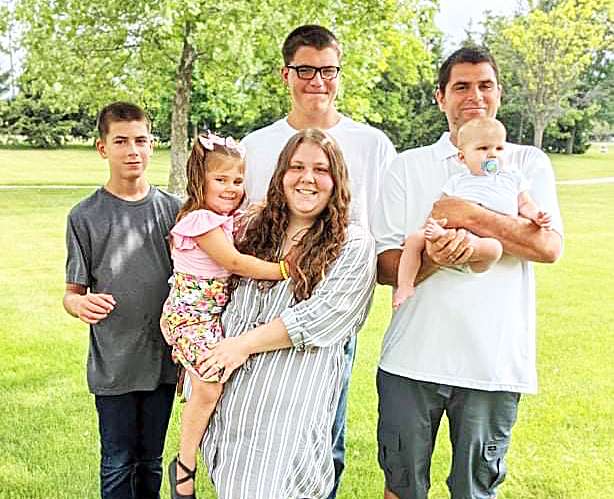 MCDOUGLE FAMILY … This lovely family lost their home in a house fire on November 4, 2022. From left to right are Mason, Caleb, dad Don holding baby Silas, and mom Heather holding Jordyn.  A form link to support the family appears at the bottom of this article. (PHOTO PROVIDED)

“Oh no! How can we help?” is the automatic reaction of friends and strangers alike in Northwest Ohio when news like this is heard.

The outreach of helping hands and hearts is a wonderful benefit to living in this area, as there truly is a sense of community.

Whether someone is known or not does not seem to matter when disaster strikes.

Don and Heather McDougle, whose house in Holgate burnt down on November 4, 2022, have found comfort in the way people have been “coming out of the woodwork, who have donated money to help us, that we don’t even know, as well as anonymous donors.”

One of Heather’s sisters, Jennifer Booth, started a GoFundMe page on Facebook called McDougle Family Fire Recovery Fund. People have also dropped off clothing for their family of six and other items as well.

It was a Friday afternoon, so that meant football for this family whose oldest son, 16-year-old Caleb, is on the Holgate football team.

He and his team were heading to Bowling Green to play against Toledo Christian in the Northern 8 Conference championship game, which Holgate won.

Heather had just dropped him off at school and gone to get Don from work in Napoleon. They were running home to get showers and head to Bowling Green for the game, but when they drove into the yard… the house was in flames!

Don ran into the house to see if he could put it out, but not being able to do that, he grabbed a few pairs of Caleb’s shoes and hauled a very special table made by his grandfather for them out of the house. Meanwhile, Heather was calling the fire department.

Sadly, nothing else was saved. By the time the firefighters brought pictures off the walls out of the house, they were so damaged by smoke and water they were no longer salvageable.

In the midst of the loss of all their belongings, the family is grateful for many things…none of them were home or injured and the fire did not reach the small buildings where they keep their chickens and pigs.

They have family in Napoleon who has taken them in and people have been so caring.

Don and Heather and their four children, Caleb (16), Mason (14) who lives full time with his mother in Bryan, Jordyn (5) and Silas (2), attend church in Archbold, at Turning Point Pentecostal Church.

His parents attended Turning Point and they began to attend there as well about five or six years ago.

Three years ago, they moved from Napoleon to Holgate and have owned their modular home there for one year.

Since the fire they have been living with Don’s grandparents who graciously opened their home to them in Napoleon with Heather driving the 20 minutes back and forth to Holgate three times a day to get the kids where they need to be.

The pigs and chickens are still at their home place so she stops by and takes care of them every day.

This constant driving is what she has to do right now, Heather said, as they have not been able to find anywhere in Holgate that they can rent until they can rebuild.

“I absolutely hate driving in snow,” she said, “so I am nervous about all this driving all winter.”

It would be wonderful if they could find a place in Holgate but “it is such a small town and there just doesn’t seem to be anything available.”

So, what to do? The insurance company seems to be “taking their good old time” to let them know if their insurance will cover extra living expenses until they can find something else or rebuild the house.

They are personally financially responsible for the demolition of the burned house, Heather said.  The quotes for that have all been between $5,000 and $10,000.

With all the driving back and forth between Napoleon and Holgate, their biggest living expense has been gas.

The communities of Holgate and Turning Point have truly filled the need for clothing and right now they do not have storage space for anything larger.

The mortgage for their home, which is now a pile of rubble, still has to be paid until the insurance company determines what will be covered.

It is a hard time in which they find themselves but as Heather said, “It is going to be a one step at a time, one day at a time kind of thing right now.”

They are hoping to find a modular home company who will help them clean up the foundation after the demolition and rebuild a new home for them on the same spot.

Meanwhile, they are feeling blessed to be taken in by family but a little “on edge” as they deal with the emotional, physical and mental ramifications of losing one’s home.

“The children are adjusting ok, but it is hard not to be able to have the freedom of their own home,” Heather said.

“You know, where they can go to their own rooms when they want to, where it is their own stuff,” not having their toys, needing to be a little more careful as grandparents do tend to have breakable things around the house, and just missing that feeling that comes with being in your own place.

The church is there for them as a “big support system” and people everywhere are being so generous to this family who finds themselves in an unexpected spot in life.

As Heather spends her days driving, Don is working six or seven days a week right now, trying to make enough money to cover all these changes, but “We are going to make it,” Heather said.

For anyone wanting to help, check out the GoFundMe page (full link below this article) or call Pastor Jason Clutter at (419) 388-4637.

Editor’s Note – After the publication of this community support article, online messages were received noting one family member pictured, did not live full-time with the family featured.  Discussing this point with church leadership assisting the fundraiser and the family featured themselves on the phone Thursday afternoon, this was confirmed.  It was also confirmed by our writer this was originally stated during the initial interview but was not fully clarified in the original article.   Several requests were made for a phone interview from the original complaint actively being submitted publicly on social media, no return phone call has been received at the time of this clarification.

The Village Reporter works closely with local churches and area faith leaders to assist in raising funds for those in need when tragedy strikes.  This was our intent with the publication of this article.