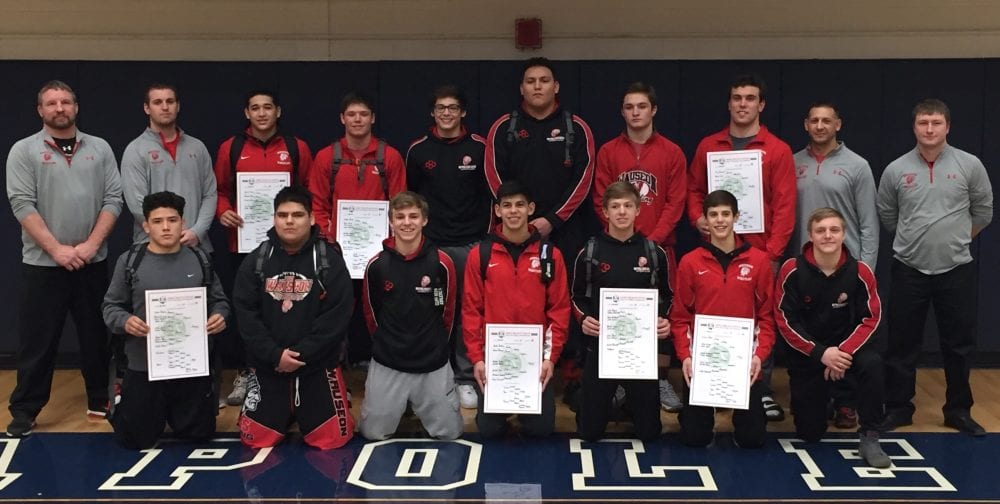 The Wauseon Indian Varsity Wrestling team started down the road to Columbus and the Ohio High School wrestling championships with a convincing sectional title. 13 Indians wrestlers advanced to district competition that will take place in Mansfield. Wauseon had seven individual champions and dominated the team competition. With 13 qualifiers the team competition was wrapped up early in the tournament. The Indians were lead by last years two State runners-up senior Tony Banister and junior Sandro Ramirez with titles at 195 and 145 respectively. Freshman Gavin Ritter started the finals out right with a major decision at 106, then Nolan Ray qualified with a third place fall at 112, Jarrett Bischoff scored a fall at 120 for his title. At 126 Alex Slattman earned a 1-0 decision for 3rd then the next five weight classes had Indians in the finals. At 132 Hunter Yackee brought home a Title, 138 Mauricio Barajas earned second followed by the Ramirez championship at 145. The 152 lbs. champion was Xavier Torres. At 160 Andrew Bailey brought home gold. At 170 Wauseon’s Trent Davis defaulted to 4th because of illness and then Banister brought home his title. 220 lber Sammy Sosa earned a pin fall for third and Alex Sosa rounded out the scoring for the team with a second place finish at 285 lbs.

By Mike Reeves
Special to the Village Reporter