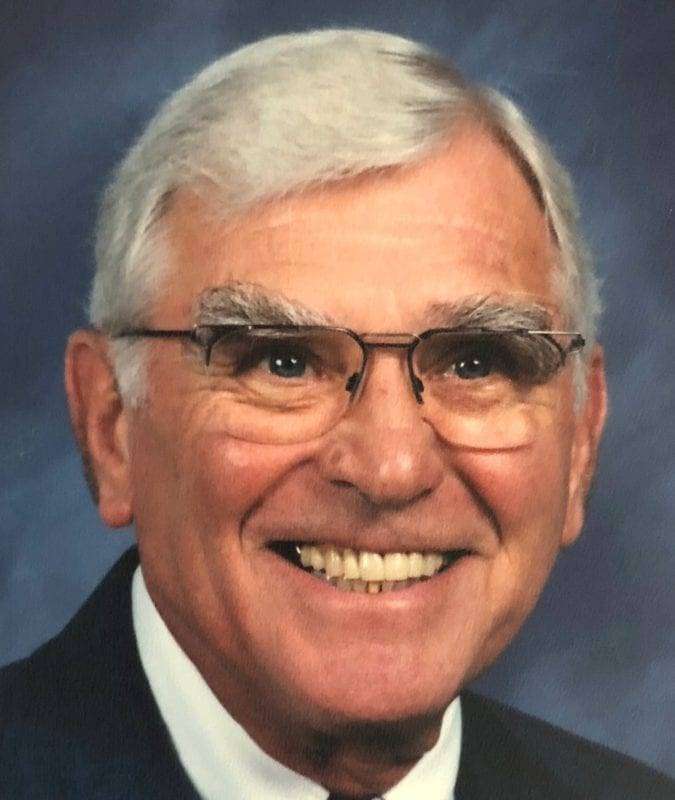 James B. “Jim” Roos, passed away on Thursday, November 8, 2018, at the age of 87. Jim was born on October 21, 1931 to Harold Stutesman Roos and Catherine Grisier Roos in Wauseon, Ohio. The eldest of four children, he graduated from Wauseon High School in 1949 and Ohio Wesleyan University in 1953. In high school he participated in football, track, band, chorus, and plays.

Upon graduating from college, he was inducted into the U.S. Army and served from 1952 to 1955, mostly in Metz, France with the 102nd QM Group. Upon discharge from the Army he went to work with the Armstrong Cork Company in Lancaster, PA, Macon, GA and South Gate, CA. Eventually he returned to Wauseon, Ohio to work with his father and brother, Tom, in the Grisier Roos Insurance Agency, a family business established in 1868 by his great-grandfather, James Grisier.

Jim was a Eagle Scout with Order of the Arrow, a director of the People State Bank, Wauseon, Ohio, the Farmers State Bank in Fayette, Ohio, and Tiffin Valley National Bank, Archbold, Ohio. He was also a board member and three-year board chairman of Lutheran Social Services of Northwestern Ohio. He had also been president of the Ohio Farmers/Westfield Insurance Companies Agents Association. In the Wauseon community Jim was a president of the Wauseon Chamber of Commerce, Wauseon United Way, and a director of the Wauseon Development Corp. He served on the Homecoming Committee and as chairman in 1963. Jim was an active member of Trinity Lutheran Church in Wauseon, serving one time or another on the Stewardship, Building, Evangelism, Organ, and Call committees, and singing with the choir since 1959.

He enjoyed watching many sports especially high school and college football and basketball, but his real love was music. He had always sung in grade school, high school, Ohio Wesleyan’s Acapella Choir and many church choirs. He loved to sing! It wouldn’t be Jim without music.

Visitation for Jim will be held from 2:00 P.M. until 5:00 P.M. on Sunday, November 11, 2018, at Trinity Lutheran Church in Wauseon. The funeral service will take place at 2:00 P.M. on Monday, also at the church, with Pastor Roger Marlow, officiating. Interment will follow in the Wauseon Union Cemetery.

The family requests that memorial contributions be given to Trinity Lutheran Church. Online condolences may be offered to the family at www.grisierfh.com. Edgar-Grisier Funeral Home in Wauseon has been entrusted with arrangements.